Both models are built for comfort and are suitable for long-distance touring.

Moreover, their versatility means they can handle both highways and city streets with ease. Despite their sterling qualities, the Super Tenere ES and Tenere 700 models owners have experienced a few hiccups.

Whether you’re in the market for one or you’re looking to troubleshoot, we’ve compiled a list of a few commonly reported issues Tenere ES and Tenere 700  owners have experienced.

Let’s crack into it! 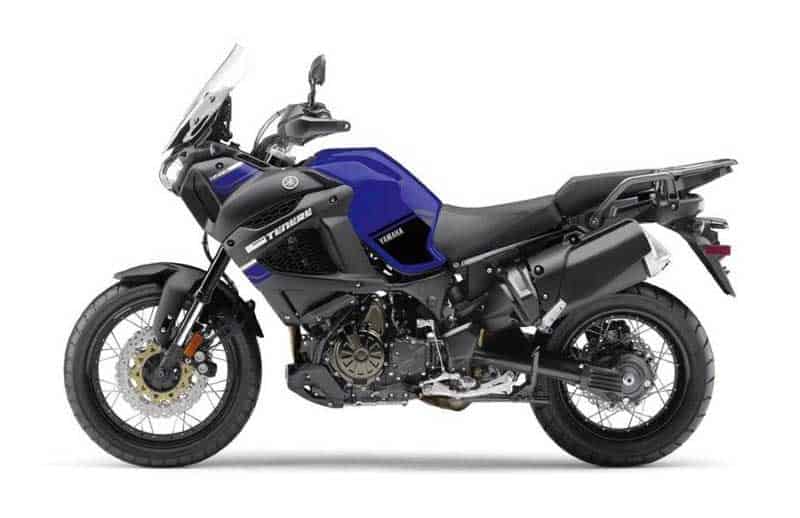 Here are common problems associated with the Super Tenere ES:

The culprit, they said, was the shift cam segment stopper located on the transmission shift shaft.

Simply put, the bend in this critical component was sharp and drastic where it should’ve been round with a steady radius.

Over time, this piece’s defect could lead to the stopper’s features, where it’s subjected to a constant force.

A few bikes saw the piece crack and fail, rendering shifting, and therefore the motorcycle, useless.

Others caught it before it led to shifting complications. Still, losing the ability to shift is no joke. Shedding gear function at high speeds could snowball into vehement wobbles in no time- not just stressful, but dangerous.

Whether you’re buying a used Super Tenere ES or you already own one, find out its manufacturing date. If it was made in the fall of 2014, make sure it’s been upgraded.

If you’re unsure, take it to a Yamaha dealership to investigate. They should run your VIN and find out if your bike is good to go.

All Yamaha dealerships were alerted and required to replace the entire shift shaft assembly of the 4,900 US models that qualified for recall; they should be well aware and happy to help.

A common complaint about the Super Ténéré ES models is that they tend to make excessive rattling noises.

Some rattle is normal in these bikes- just the nature of the beast, but an excessive, worsening rattle is what we’re after here, and most owners have traced it to one of two culprits.

The clutch on pre-2014 was notorious for rattling. The clutch would racket at start-up for around 8 seconds. It’s to be expected on those older models and shouldn’t be a cause for alarm.

While it wasn’t a safety concern, Yamaha did heed customer feedback. In 2014 they updated the Tenere Es clutch basket design with rubber mounts that absorbed the vibration.

If you have an older model, wear some earplugs- it cancels the wind noise anyway!

If that doesn’t cut it for you, there’s plenty of information out there on doing a DIY install of a post-2014 clutch basket onto a pre-2014 bike. It solves the problem in some instances more than others, so if you’re not comfortable with a wrench, take it to the pros at the Yamaha dealership.

First-generation Super Tenere ESs had two separate issues, each with its own rattle.

Another likely culprit for the rattling noise is a bad cam chain tensioner(CCT). The cam chain, aka “timing chain,” controls the bike’s engine’s valve timing, using spring tension or hydraulic pressure to maintain tension in the cam chain.

Once the tensioner wears out, the timing chain won’t have proper tension and will become loose. Soon enough, you will start to hear a ticking or rattling noise from the cam chain area.

Let’s reiterate- not all rattling/ticking results from a faulty component; if the rattle gets worse with time, be vigilant because a loose cam chain only gets looser, and eventually, its slap-around can cause some damage.

If you hear the rattling at startup, but it goes away after some minutes, you have nothing to fear, but if it’s getting worse, take it into Yamaha ASAP to be inspected. Cam Chain and CCT inspection is part of routine maintenance; keep up with the schedule outlined in the owner’s manual.

3. Bike Shuts Off While Riding

This is a rare one, but it’s happened to multiple riders, so it’s on the list: we’ve encountered multiple riders who complain about their Tenere ES suddenly cutting out, especially at low speeds or while idling.

A buildup of carbon deposits in the engine may be responsible for the bike’s abrupt stall. When fuel burns, it releases carbon by-products. Over time they deposit themselves on different engine components.

This includes the intake valves, throttle bodies, cylinder pistons, and the combustion chamber.

If left unchecked, these carbon deposits might cause problems for the bike. Problems like- engine running rough with intermittent stalling.

Riding at high RPMs for a sustained period helps clear the deposits.

However, if your bike is a garage queen and doesn’t see much riding, or if you’re taking low-end cruises to work and back, chances are the carbon buildups will stick around.

Here are ways to prevent carbon deposits from building up in your bike’s engine:

A sitting motor is a sad motor, and a sitting bike is a crying shame.

If you leave your bike parked with fuel in it, the gas will evaporate and leave carbon deposits behind.

The carbon will continue building up until it restricts airflow/fuel flow in the engine. Inevitably, either of these will lead to the engine shutting off while riding.

If you are not one to do high-revving rides, the carbon deposits in your bike’s engine aren’t going anywhere.

This is because your bike doesn’t hit the high RPMs needed to knock off the carbon deposits. If your saddle-time is spent cruising at low RPMs, the best thing to do is add a fuel additive to your tank.

These chemical solutions are cheap and are really effective at preventing carbon buildups.

If you detect carbon buildups as the root of the problem, it’s time for some “decarbonization.”

This term refers to removing the deposits, either by hand or by chemicals. You can do this by adding a fuel system cleaner to your tank to clear out the buildup, following the instructions word-for-word.

Alternatively, you can physically scrape the carbon deposits from the affected areas.

Here’s the chief complaint  about the Ténéré 700:

The Tenere 700 was built to be a reliable,  stripped-down entry-level dual-sport ripper sans the bells and whistles.

The Tenere 700 is no-frills, all-thrills.

That said, no bike is built for everyone, so manufacturers like Yamaha design each model’s variations.

The biggest complaint among  Ténéré 700 owners is the dearth of equipment on their bikes relative to bikes in the same class.

Rivals such as Honda’s Africa Twin, Triumph’s Tiger 800, and KTM’s 790 are better equipped, but you get what you pay for.

Here are some features available on the market but absent on the Ténéré 700:

Still, it’s important to be aware of your expectations. If you’re looking for bells and whistles, they’re out there. The Tenere 700 is reserved for riders who want a simple, straightforward adventure bike experience at a modest price point.

General Pros and Cons of the Yamaha Super Tenere ES and Tenere 700:

Here are some of the best qualities and low points of the Super Tenere ES and Tenere 700:

Present on the Super Tenere ES, this feature allows you to change the bike’s suspension to suit your needs.

You can select from four levels of pre-load and three levels of damping.

So, regardless of the terrain or load you have, this bike’s suspension is up to the task.

The Super Tenere ES is a bike made to handle long rides in comfort.

It features an upright riding position along with adjustable seat height. Moreover, it comes standard with cruise control and heated handlebar grips.

These features make long-distance riding (regardless of weather) a pleasurable experience.

Unlike its rivals, the Tenere 700 is an affordable adventure bike.

In fact, it is arguably the cheapest bike in a class that comprises the Honda Africa Twin and Triumph Tiger 800, KTM 790 Adventure.

While it is not as well equipped or comfortable as these models, it is an attractively priced alternative.

The Tenere 700 is at home on the pavement and the trail.

Thanks to its tractable engine, lightweight chassis, and high-quality suspension, off-roading on the Tenere 700 is a satisfying and comfortable.

Test riders have praised the overall stability, feel, and control offered by this model.

With this, we’d recommend the Tenere 700 if you’re looking for a worthy off-roader.

Here are some disadvantages to these motorcycle models:

“Powered by the MT-07 engine, the Tenere 700 has 74bhp and is a fun and engaging ride with an impressive spread of power that works well both on and off-road. It may be a relatively simple bike, but it has clearly been thought through, giving a truly useable package.”

“The Super Tenere ES is built for superior long-distance on and off-road journeys and exploration. With traction control, electronic suspension, and more, it’s the ultimate adventure tourer. The Super Tenere ES brings adventure on every ride with a powerful 1199cc parallel twin, wide-ratio 6-speed transmission, and adjustable suspension.”