The Accord is one of the most famous Honda nameplates all over the world.

It has achieved immense success, especially in the U.S. and was the best-selling Japanese model in the country for years.

In 1989, the Honda Accord became the first import brand vehicle to be named the best-selling automobile in the U.S.

For the rest of the article, we shall examine facts and figures about the Honda Accord.

But before we dive in, make sure you checked our article about typical problems with the Honda Accord.

How Many Honda Accords Have Been Sold Per Year in the U.S.?

The Honda Accord has featured on many year-end lists of best-selling automobiles. This means it has racked up very impressive numbers over the years.

Below is a year-by-year breakdown of Honda Accord’s total sales in the United States.

That’s an incredibly impressive sales figure and few models have that, much less a foreign brand. The table shows that the year 1990 yielded the highest yearly sales figure so far with 417,179 units sold.

Make sure to also read our article about the Honda Accord and keys.

What Year Did Honda Start The Accord Models?

Honda started making and marketing the first-generation Honda Accord models in 1976.

The Honda Accord is presently in its tenth generation, which started in 2017.

How Is The Fuel Economy On A Honda Accord?

It is pretty obvious from the numbers so far that the Honda Accord is a beloved model, especially amongst Americans.

Is fuel economy one of the reasons why the Accord continues to dazzle hundreds of thousands of American auto consumers?

To determine just how great the Accord’s fuel economy, we will look at its miles per gallon. We will also compare the numbers to that of some of its major competitors.

The table above shows that there are four main variants of the Honda Accord with two hybrid variants.

The Honda Accord Hybrid is the most fuel-efficient variant with a combined MPG of 48. It even has a higher combined MPG than the Camry Hybrid and Sonata Hybrid (its competitors).

The non-hybrid variants of the Honda Accord also have a better MPG than those of the Camry and Sonata.

Fueleconomy.gov estimates that for the Accord, you save $1500 in fuel costs over the next five years compared to the average new vehicle.

Even better, for the hybrid variant, you save $3,750 in that period.

This basically cements the Accord’s place as one of the mid-size cars with stellar fuel economy.

Please also read our article about how long the Honda Accord lasts.

How Quickly Do Honda Accord Depreciate?

According to Car Edge’s forecast, a new Honda Accord will likely depreciate by 42% in five years.

AutoPadre has a slightly different forecast for the Honda Accord- 45% depreciation rate in five years. This would mean a resale value of $17,787 thereabouts in five years.

Considering that the Accord can hold over half its original value after five years, it shows the car has a strong resale potential.

Did Honda Recall Any of the Honda Accord Models?

Many a time, auto companies recall some vehicle models due to observations by government agencies or incessant consumer complaints. 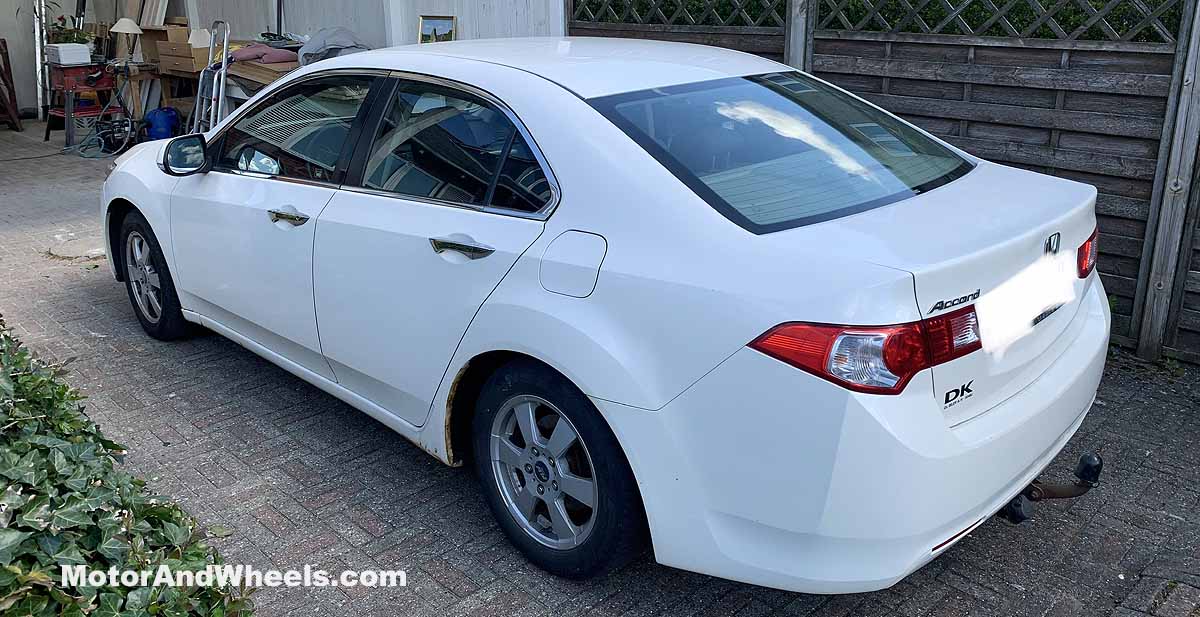 Some models of the Honda Accord have been recalled several times over the years.

The table below details how many recalls have been issued for each model.

The models with the highest number of recalls are the 2003 and 2005 Honda Accord models with 24.

Also read our article about the Honda Accord in snow and winter driving.

How Much Do the Accord Models Pollute?

The Honda Accord is a very environment-friendly vehicle, especially its hybrid variant. It was named Green Car of the Year in 2014 and has stellar EPA ratings as we are about to see.

Honda Accord models have a Greenhouse Gas Emissions estimate of 268 grams per mile and 4.0 metric tons per year. They also have an energy impact score of 10.0 barrels and an EPA smog rating of 7/10.

The Honda Accord Hybrid has even more green numbers with a Greenhouse Gas Emissions estimate of 183 grams per mile. It emits just 2.7 metric tons per year with an energy impact score of 6.9 barrels and an EPA smog rating of 9/10.

At this point, it is safe to say the Honda Accord doesn’t pollute very much. .

How Much Can The Accord Models Tow?

The Honda Accord has a curb weight of 3217 pounds and a towing capacity of up to 1000 pounds.

While it isn’t exactly the appropriate vehicle for towing, you can pull things with the right equipment.

How Reliable Is A Honda Accord?

Most experts agree that the Honda Accord is one of the most reliable vehicle models around. U.S. News & World Report gives it an overall rating of 8.9/10 based on a culmination of several expert ratings and opinions.

J.D. Power also gives the Honda Accord a predicted quality and reliability score of 82/100 which indicates general satisfaction. It ranks #3 on J.D. Power’s list of Top 10 Consumer Rated Sedans.

How Safe Is A Honda Accord?

The Honda Accord scores excellent safety ratings across board. U.S. News & World Report gives it a 9.9/10 rating, basically classifying it as a perfectly safe car.

The National Highway Traffic Safety Administration (NHTSA) gives the Accord a five-star rating in all categories. The categories include Frontal Cash, Side Crash, and Rollover.

Meanwhile, the Insurance Institute For Highway Safety (IIHS) also dishes out a “Good” score to the Accord in several categories. The Accord gets the special IIHS “superior” score in the Front Crash Prevention category and an “Acceptable” score in Headlights results.

Below are some of the most notable safety features of the Honda Accord:

What Is the Typical Buyer Demographic for this Model?

A report by CNBC published in April 2019 stated that the Honda Accord was the number 1 car amongst millennials. For clarity, millennials are currently aged between 25 to 40 years old.

This is consistent with a study by the Hedges Company estimating that 51% of sedan buyers are between 25 and 54.

Basically, the Honda Accord has a young consumer demographic.

The Honda Accord ranked #4 on the National Insurance Crime Bureau (NICB)’s 2019 list of most frequently stolen cars in the United States.

Considering its massive popularity, it is easy to see why the Accord is a magnet for car thieves.