The Yamaha XTZ 125 is a dual-sport bike, a street-legal bike that also offers superior off-road performance.

Thanks to its lightweight and rugged design, the XTZ 125 can handle even the roughest road conditions with ease. Moreover, its versatility means it is suitable as either an off-road performer or a street bike.

If you’re looking for an affordable, beginner-friendly bike, the Yamaha XTZ 125 is an ideal choice.

Dual-sport bikes see a lot of action and ride through various terrain, and they need to be kept up with; it’s advisable to know the common problems associated with these bikes before buying.

In this article, we review the most widespread issues of the Yamaha XTZ 125 models. 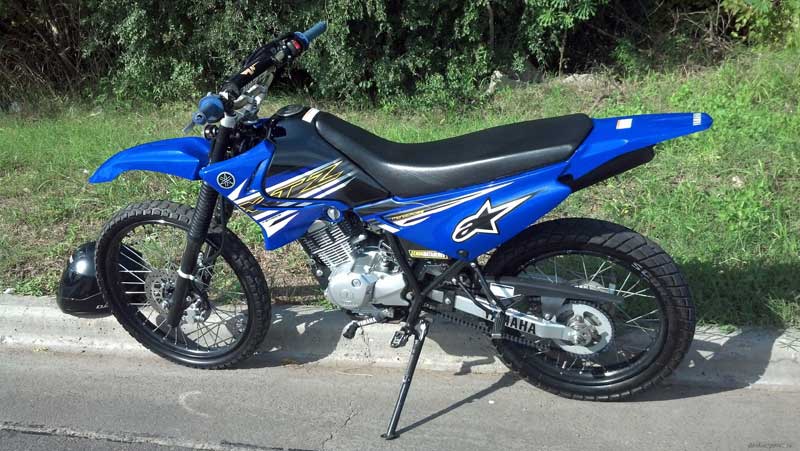 There are some known cases in which XTZ 125 owners have complained about difficulties starting their bikes.

We’ve dug up a few examples to share, and then we’ll take a look at the trouble-shooting XTZ owners do to rectify some of the starting problems they’ve encountered.

One XTZ owner reported that the starter made a “clicking” noise, and the engine refused to turn over. Although the bike started after multiple attempts, the rider was left frustrated because of the time and effort.

The problem described above is a daily reality for some XTZ 125 owners.

This is a common cause of starting problems on bikes.

If the engine is turning over slowly or doesn’t turn over, the battery’s voltage is likely low. A good way to know if a bad battery is the cause of the problems is to do a multimeter test.

Typically, the battery should have at least 12.5 volts or higher when you test it. Anything below signals a problematic battery.

The stator is the coil of wire that lives inside the engine case. A magnet spins inside of it, generating an AC (alternating current). The AC flows through the rectifier/regulator, converting it to DC power at a consistent output.

As engine speed accelerates, the stator outputs more and more power, and if left unregulated, it can overcharge the battery and cause it to explode.

That’s where the rectifier/regulator comes in.

The rectifier/regulator is the component responsible for sustaining the appropriate current. If your rectifier is bad, the battery will be damaged. If the stator is bad, your battery isn’t charging while riding, meaning it’s outputting more power than it’s generating, and eventually, it’ll die.

If you’re riding your bike regularly and your battery won’t hold a charge, you’ve replaced the battery, and the new battery is having the same issue, inspecting the stator is the logical next step.

If you’re having issues with batteries overcharging and exploding, there’s a good chance the problem is the rectifier/regulator.

The XTZ 125 comes with an electric starter and a kick starter.

It could also be a buzzing or coughing sound, which means the starter isn’t engaging.

Alternatively, if the bike makes no sound when you try starting it, chances are the starter is faulty.

If the motorcycle’s fuel lines are blocked, the engine won’t get the fuel it needs to run.

Inspect the bike’s fuel lines and see if there’s any material buildup preventing fuel from flowing.

If the timing on the bike is off, you’ll have difficulty starting it.

The engine won’t turn over, and you may hear a ticking sound when you turn the ignition. To solve this, you will need to remove the valve cover and ensure the valves are in the correct position.

Nevertheless, timing issues can be quite complex, and we’ll advise you to have the timing professionally fixed.

A faulty fuse would explain why the bike refused to start.

Fuses often wear out with age, meaning they may start to malfunction at some point.

If this happens, the spark plug won’t get the required spark to start the ignition process.

If the wires in the electrical system are loose, starting the bike may be affected.

In one case, a rider reported that his bike was “cutting out,” i.e., dying at idle.

Another owner reported that his XTZ 125 bike was idling roughly, accompanied by excessive shaking.

Some also say that although the bike idles fine, it dies when the throttle is pulled. These problems can b frustrating as they mean more time wrenching and less time ripping roads and mauling mud.

The likeliest cause of the idling problems is a dirty carburetor.

If the carburetor isn’t kept up with, the pilot jets can get clogged. Should this be the case, the bike’s idling goes wild and becomes unpredictable.

Stripping the carburetor down to the parts and cleaning them should help solve the problem.

Another common cause of idling issues is an imbalance in the air-to-fuel ratio in the engine.

Maybe the engine is getting too much air or too much fuel.

Either way, the bike will idle roughly.

The following things can cause an imbalance in the air-fuel ratio:

Anything more than this, and you may experience rough idling.

You can consult online tutorials/videos for help on modifying the idle speed.

Another issue XTZ 125 owners have had to work through is a poor performance during gear shifts.

One aggrieved owner complained that the gears became stiff and refused to shift. Some also say the bike makes crunching noises when they try to shift gears.

In worst cases, the bike lurches and vibrates under gearshifts.

Gear change issues can ruin an enjoyable ride, as they make it difficult to accelerate.

They could even put riders at risk, both on the dirt and in the street. Here are some possible causes of the problem:

I. Lack of Freeplay in the Clutch-Cable

Crunchy stiffness during gear changes could be nothing more than a poorly adjusted, or even damaged, clutch cable.

It might just be a lack of free play in the clutch cable that’s making things stiff, and all you need is a cable adjustment.

If it’s not the clutch-cable, it might be the clutch itself.

If you’re having issues with shifting, a worn-out clutch could be responsible.

It could be as simple as a stiff/stuck clutch,  but it could also be that the clutch-plates themselves are worn out.

Sometimes it’s as simple as cold oil. Anytime something feels stiff, check your oil first. If it’s clean and the bike has the proper amount, run it for a few minutes to warm the oil and thin out its viscosity.

If you have the proper amount of the appropriate oil type and your bike is warmed up, check out your clutch cable. If the cable’s good, it’s time to inspect your clutch.

When a clutch is on point, the drive plates and friction plates are thrust together when the clutch lever is released, and the clutch is engaged.

If the plates are worn, they’ll slide against each other instead of clutching, hindering the transfer of energy from the motor to the transmission.

Clutch plates wear out over time as a result of rubbing and must be inspected regularly.

If the clutch lever feels crunchy while engaging and disengaging the clutch,  or if the lever jerks around in your hand while you’re shifting, there’s a chance that either the clutch basket or the flywheel inside is damaged.

We don’t advise replacing the clutch basket on your own as the process is complicated.

Have a mechanic inspect your clutch asap to let you know if it needs to be replaced.

General Pros and Cons of the Yamaha XTZ 125

Comfort is important, particularly if you’ll be spending a lot of time on your bike.

The Yamaha XTZ 125 is designed to be as comfortable as possible for riders.

Thanks to its firm seat, you can ride on the XTZ 125 for long and not feel aches of any kind. It has low seat height and low overall weight, making it perfect for different classes of riders.

Although the XTZ 125 is an off-road-focused bike, it is street-legal as well.

Therefore, if you’re an individual looking to enter the world of two-wheeled machines, the XTZ 125 may be a good starting point.

3. Good for Off-road Use

If you’re looking for a good trail bike or farm bike, the XTZ 125 is an excellent choice.

The front suspension comes with long-travel telescopic forks, while the rear suspension has a mono-shock.

These features make it easy for the XTZ 125 to absorb bumps on the off-trail.

Combined with the beefy 21-inch and 18-inch tires, the XTZ 125 can handle just about any uneven terrain.

Even with its modest price tag, the XTZ 125 manages to offer good brakes.

As such, you can rest assured knowing your bike offers adequate braking power.

Moreover, it is air-cooled and doesn’t have the extra components found on water-cooled engines. This means there’re fewer chances of something failing.

While some may say it’s underpowered, it’s enough to get you across the trail quickly and efficiently.

Here are some of an unkept XTZ 125’s problems:

Routine maintenance and inspection can help prevent these issues or correct them while they’re still easily rectified.

“Commonly seen on dirty trails, off-road training camps, and the roughest roads, the XTZ 125 is a versatile dual-sport motorcycle that has earned the off-roading community’s approval. This rugged and lightweight dual-purpose machine lends itself well to dirt-riding newbies and trail veterans alike and offers manageable and capable power paired with responsive handling.”

What’s The Resale Value On the Yamaha XTZ 125?

NB: These prices may vary depending on various factors. Also, you may have to import these bikes into the U.S.A.