The Virago was among the first Japanese-made cruisers that gave Harley-Davidson a run for the money.

It proved attractive to riders as it was easy to ride and offered decent performance.

If you are looking for a trusty cruiser motorcycle with laid-back riding manners, the Virago is an excellent option. However, you’d want to know the common problems on these bikes before you buy one.

To help you, we’ve compiled a list of the widespread issues faced by other Virago owners. 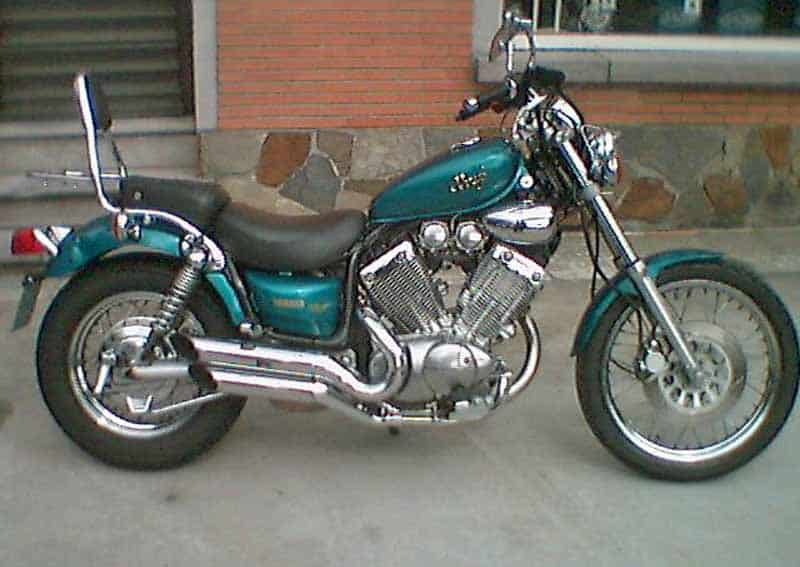 According to Yamaha owners, the bikes tend to run rough accompanied by sputtering, jerking, and lurching.

In worse cases, the engine may cut out completely and force the bike to stall.

The likeliest factor responsible for the running problems is a faulty fuel system.

Given the old age of most Virago bikes, it’s easy to see why the fuel system may be responsible.

Most Virago bikes are old, and some have sat unused in garages for years before being sold off to some hapless buyers. Because of infrequent use, these bikes hardly stay in good condition.

In fact, as the fuel evaporates, it will leave some sludge deposits. These deposits will build up in various fuel system components such as the carbs, fuel tank, fuel selector valves, fuel lines, and the breather check valves.

The bike is “starved” of fuel (owing to the clogging of fuel-system parts) and cannot run properly. Soon, the motorcycle will start to sputter and jerk while riding.

In fact, if the fuel supply has been restricted severely, the bike may lose power completely.

Another hidden cost of the poor performance of the Yamaha Virago models is rust.

No, we are not talking about the external rust that spoils your bike’s look. We are referring to rust that develops in a bike’s internal system.

This internal rust is often due to age and poor storage and often affects fuel flow. If the insides of bike rust, the particles will slowly clog fuel system parts such as the fuel lines.

If this happens, fuel supply to the engine will be restricted, causing the bike to run poorly.

Here are a few solutions to consider:

Any of these could get blocked with rust particles or sediment left by evaporated gas.

Ensure you cleanse all the mentioned parts.

Inspect any Components that let Air into the Fuel System:

These parts (e.g., vacuum lines, air filters) can also get clogged with rust and sludge, which would cause restricted air-flow.

This will force the engine to run rich and lead to the same problems discussed above.

Just as you did with the fuel-system parts, clean these components thoroughly.

Electrical problems can be hard to diagnose, and every rider prays against them.

Here are some common electrical faults on the Yamaha Tracer models:

For some reason, the regulator and rectifier on the Virago are prone to failure.

Signs of failed regulator/rectifier include engine sputtering, rough idling, or loss of acceleration power. The regulator controls the battery’s voltage and keeps its power output within limits.

A faulty regulator will lead to a poorly managed current, which will cause the battery to die abnormally.

As the regulator, the stator on the Tracer models is known to fail repeatedly.

Some suggest the exposure of the stator to pronounced heat and vibration may be the reason for the failure.

Moreover, the stator could wear over time and go bad. The stator generates power for the motorcycle’s ignition—without it, the engine won’t run at all.

If you have a broken stator, it will produce weak sparks, and the engine will run poorly.

Signs of a failing stator on the Yamaha Tracer include:

Electrical connectors often wear with time and may loosen or break.

Should this be the case, the battery may refuse to charge or hold current.

Other symptoms of bad electrical connectors include dimmed headlights and failure of the bike to start.

If you detect loose/broken electrical connections, clean the connections with contact cleaners and re-fasten them. Ensure they are properly tightened.

The starter gets your bike to run. Problems with this component can prevent the bike from starting.

It can also lead to noises when you engage the starter. Many owners of Yamaha Virago bikes, especially older models, have encountered this problem.

Symptoms of a faulty electrical starter on the Yamaha Virago motorcycle include:

Typically, the engine should come to life immediately after you activate the starter.

However, if the starter turns slowly, and the bike cannot start promptly, then something is wrong with the starter.

Some users report that the starter on their Virago models will emit a clicking sound but won’t turn over.

Other weird noises that show starter problems include a grinding, whirring, or buzzing noise.

In this case, the bike won’t come on at all, even if you activate the starter.

This is because the starter is “slipping” and cannot engage the engine. You may crank the starter multiple times, but the engine won’t run.

Sometimes, the starter motor doesn’t run at all, meaning you can’t start the bike.

The Yamaha Virago’s reputation as a trusty cruiser is sometimes hampered by its dismal fuel holding capacity.

This is true, particularly for the Virago 535 variant, which has a small 12-liter tank.

According to owners, the tank is too small to be of any practical use and lasts only about 100 miles.

This makes long-distance riding difficult as riders may have to stop frequently to refuel.

Here are the main selling points and shortcomings of the Yamaha Virago:

Pros of the Yamaha Virago

Here are some of the qualities of the Yamaha Virago:

Here are some drawbacks of the Yamaha Virago:

“The Yamaha XV535 Virago is excellent value, and there are plenty of good used ones around to choose from. The Virago is a simple motorcycle to work on, it’ll save you money at the garage, and the insurance is low too.”

What’s The Resale Value On the Yamaha Virago?