If you are looking to buy your next scooter, the Yamaha Aerox is a superb choice. It offers breathtaking speed and handling and is loaded with premium features.

However, you need to know the common problems associated with these models.

Here are the most common issues with the Yamaha Aerox: 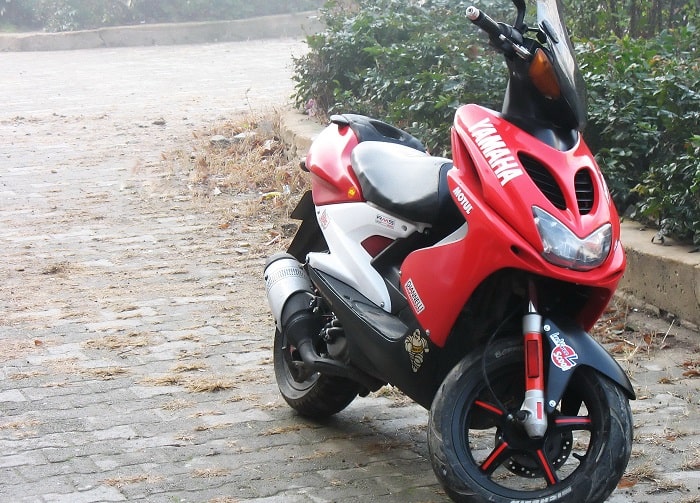 Everyone buys his/her bike and expects it to run flawlessly.

Sadly, this is not the case for some Yamaha Aerox owners.

These riders report experiencing multiple running problems with their bikes, which often makes for erratic performance and plenty of headaches.

Below are some of the Aerox motorcycle’s running issues:

A common complaint among Aerox owners is that their bikes refuse to run at all on certain occasions. Typically, your bike should start once you activate the electric starter.

However, activating the starter on the affected Aerox bikes hardly gets them to run. Instead of the engine roaring to life, the electric starter merely turns over, and the bike shows no signs of starting.

When these bikes come to life, it is after the hapless owners have made multiple efforts to start them. In some cases, the bikes won’t run until after 10-20 start attempts. This problem is common during chilly weather or when the bike has been in disuse for long.

Another running issue with the Aerox bikes is that they often “cut out”, i.e. they lose power and stall.

Most times, the pattern is the same: the owner starts the bike, rides it for a few minutes, and then the bike stalls.

For some, the stalling occurs when the bike reaches a certain temperature. In such cases, the scooter may lose power after the bike has been running for some time e.g. at a red light.

Not only does this affect performance, but it also puts the rider at risk of a collision or crash.

And even if the rider doesn’t suffer a mishap resulting from the bike stalling, no one enjoys having his/her bike dying during a trip.

Possible causes for these running problems include:

2. Ride Quality Is Poor in Some Situations

Although it’s a small scooter, the Aerox has great cornering and handling ability, thanks to a sporty design.

However, the stiff suspension means ride quality can be compromised, especially when riding over bumps and other uneven surfaces.

Moreover, some complain that the seat is unsuitable for long drives and leaves them sore.

However, this complaint isn’t particularly widespread, and the Aerox remains a good daily driver.

It is normal for a motorcycle to vibrate. However, excess vibration can make the ride rough and reduce the joy of riding.

Some complaints concerning the Aerox bikes have revolved around their tendency to vibrate excessively.

The bikes are said to vibrate heavily, with the riders feeling these vibratory effects in their hands/legs. This often affects ride quality and dampens the riding experience.

How does a variator affect vibration? If it’s faulty or improperly set up, your engine may operate at low RPMs in low-speed situations. This will cause the engine to lug slightly, leading to the vibration at low speeds.

Tuning the variator to allow for more engine RPM at low speed should solve the problem. There are several resources online that can teach you how to tune your scooter’s variator properly.

Electrical problems can be frustrating for owners, as they often prevent bikes from functioning flawlessly.

Aerox owners have had their fair share of electrical problems.

Here are some advantages of the Yamaha Aerox:

The Aerox comes with a 155cc, liquid-cooled, single-cylinder engine that offers around 15 bhp (brake horsepower) of torque and 13.8 Nm of torque.

This makes the Aerox arguably the best performing model in its segment.

Besides, this model comes with Variable Valve Timing (VVT), which gives the following benefits:

There’s no denying that the Aerox is one of the best-looking shooters on the market.

The model’s aggressive and sporty styling is further enhanced by an angular silhouette and sharp lines.

Brakes are an important part of any bike and help you stop your bike safely.

The Aerox offers decent braking power, thanks to a front disc brake and drum rear.

One of the best things about Aerox is the many features it offers.

For example, Aerox models come with a smart key feature that lets the rider remotely lock or unlock the scooter. This feature helps protect your scooter in crowded parking spaces.

All you have to do is press the key and your scooter will emit a beeping sound and flash its lights.

Another impressive feature on the Aerox is the dial assembly at the front panel. This component makes it convenient to turn the scooter on and off and open the fuel door and storage compartment.

You can even lock the steering wheel to prevent criminals from stealing your bike.

Other features include a digital instrument panel, LED headlight and taillight, and mobile charging socket.

The Aerox comes with a sizeable cargo-holding capacity, thanks to an under-seat storage compartment.

With this, you can keep things like helmets, food, books on your bike.

There’s also a glove compartment where you can store small items such as keys, phones, wallets, etcetera.

Despite the amount of power it offers, the Aerox doesn’t guzzle fuel.

This is mostly because of Yamaha’s Blue Core technology that helps keep fuel consumption low.

The following are some shortcomings of the Yamaha Aerox:

“The Aerox S handles very much like a scooter, albeit sharper and more agile. The suspension isn’t anything fancy… but it was enough to have a blast, especially with the wide, sporty tires. The suspension also does a good job of absorbing road bumps.”

“Like most scoots the Aerox GP1is also practical. Underseat storage is big enough to hide a helmet, and the leg guards provide enough wind protection to stop flares fluttering in the breeze. In short, the Aerox GP1 represents a massive dose of race-style cool in an already fun and cool sector.”

What’s The Resale Value On the Yamaha Aerox?

The table below shows the resale value for some model years of the Yamaha Aerox.

Note: You may have to import these bikes into the US.