The Yamaha DragStar models are some of the most budget-friendly cruiser bikes out there.

It is easy to control, offers comfortable riding, and is affordable.

Like all bikes, the DragStar requires specific attention in a few different areas, discussed in this article.

Here are the most common problems associated with the Yamaha DragStars: 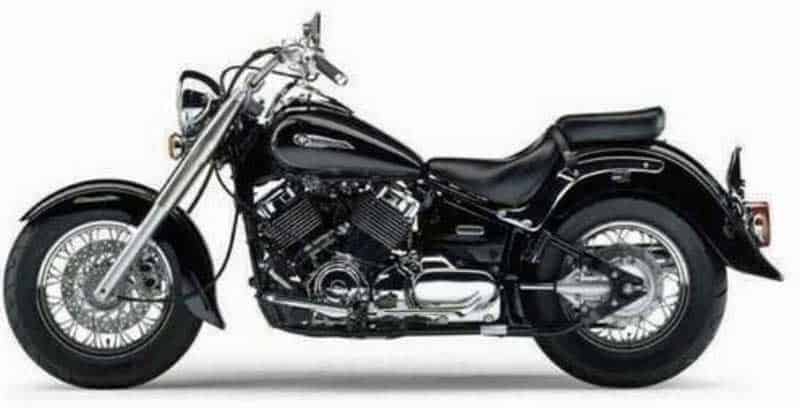 This is a common problem with carburated motorcycles that affects some of the DragStar models.

Bogging refers to a situation in which the motorcycle hesitates while the rider throttles up to accelerate.

If your RPMs are where they need to be,  your bike should respond immediately when you twist the throttle. However, if you switch gears and your bike delays before speeding up, your bike is bogging.

Another sign that a motorcycle is bogging is if it sputters when you try to increase its speed. In such a situation, you will not see the bike’s power output rise, nor will it move faster.

Rather, the bike will chug along on the road like a heavy steam train. This can be annoying and frustrating for any rider. Besides, it can put the rider at risk of a collision or crash.

The major cause of the bogging problem is an imbalance in the air-fuel ratio.

Combustion requires ignition, fuel, and oxygen. Combustion is maintained via the ignition of the spark plugs and the injection of fuel and oxygen, or air, into the engine cylinder’s combustion chamber.

If the ratio particular to that engine design is off, bogging will occur, throttle response will suffer,  and acceleration will be affected.

This means there are two types of bogging:

If a bike gets too much air and not enough fuel, the motor will run “lean.”

A lean mixture is an air-fuel ratio that lacks fuel.

This will inevitably cause it to bog or hesitate when the rider tries to accelerate.

If the bike gets too much fuel and not enough air, the engine will run “rich.”

A rich mixture is an air-fuel ratio too rich in fuel.

Should this happen, the motorcycle’s throttle response will become slow and cause the engine to hesitate.

There are, however, other catalysts that can detour the fuel on its way to the combustion chamber; it’s not always an improper air-fuel mixture that is to blame. If the fuel isn’t reaching the cylinder, acceleration will suffer.

Faulty or clogged up fuel lines could restrict fuel flow to the chamber, causing sputtering and hesitation- bogging.

An improper air-fuel mixture may be responsible for the engine bogging.

As this is a fuel-related problem, any faulty component in the motorcycle’s fuel system may be responsible.

Adversely, a hole in your air filter will allow too much air into the engine cylinders, along with unwanted debris that could cause more severe problems.

If the bike is carbureted, something else to suspect when diagnosing engine bogging is the carburetor.

If dirt or debris gets into the carburetor and clogs the jets, fuel flow issues will occur.

If this happens, the engine will likely hesitate next time you accelerate. Don’t fret, though; a simple clean of the carburetor (including the jets) will solve the issue.

Additionally, poor carburetor adjustment can also be responsible for bogging down a DragStar’s acceleration. Should this be the case, the carbs will need to be re-tuned.

Unless you’ve been trained, we would advise that you avoid the temptation to tune the bike as it could lead to more problems. It’s best to have a technician carry out the carburetor tuning/readjustment if you’re not a pro.

It can be frustrating and annoying to have your bike stall while riding.

Some Yamaha DragStar owners have complained that their bikes tend to lose power without warning. According to these riders, the stalling problem is often preceded by backfiring or bogging.

One minute the motorcycle is cruising; the next, it is sputtering and cutting out mid-transit.

In other situations, repeated backfires may precede the stalling.

A backfire is a loud pop or series of pops generated by the bike’s exhaust pipes.

Here are some likely causes for the stalling problem on the DragStar bikes:

If the bike’s engine isn’t getting the fuel it needs to run, combustion can’t happen, and the bike will die.

A dirty fuel filter will reduce the engine’s fuel supply and cause the bike to stop running.

Likewise, a clogged fuel pump or fuel line(s) could cut fuel flow to the engine and cause the stalling problem.

Gasoline dilutes after 30 days and reduces in quality day by day after that.

Running old, diluted fuel in your motorcycle can cause problems, including stalling.

If your bike has sat unused for more than a month, then it’s likely you have bad gas in it.

The gas cap helps prevent dirt and debris from getting into the gas tank.

It is also responsible for allowing air into the engine to get a balanced air-fuel mix.

When clogged, gas tanks will restrict air from entering the engine, which leads to engine stalling.

If the vacuum lines in your bike start to leak, the amount of air in the engine will increase.

This will lead to a situation in which the engine runs too lean and eventually stalls.

The throttle position sensor controls the air-fuel ratio in the engine.

If this component is faulty, your engine will respond to your throttle commands and distribute the improper amount of air and fuel, which could cause stalling.

So, how do you prevent your DragStar bike from stalling?

The first step is to ensure you don’t have bad fuel. If the bike has stayed unused for more than a month, drain it of all fuel. At that 30-day mark, the gas quality could have deteriorated, which can cause your bike to run poorly or even corrosion.

The second step is to ensure that nothing is offsetting your bike’s air-to-fuel ratio. Check and clean filters; air filters, gas caps, fuel filters. Inspect for leaks, particularly in the vacuum lines and intake manifolds.

Seal whatever cracks or holes you find; if you cannot seal a crack, replace the part.

Check your air filter. As previously mentioned, a clogged air filter causes the bike to run rich, and a hole in the filter causes a lean mixture and lets unwanted particles into the engine cylinder.

Examine the throttle position sensor (TPS) for any signs of malfunctioning.

Finally, check if any component restricts fuel flow to your engine, starting w1ith your fuel pump and fuel lines.

More than a few riders out there have reported DragStar’s having issues starting up.

The bike will start up on some affected bikes — lights and all — only to die before the rider can take off. For others, the bike doesn’t start at all; the starter will crank, but the bike won’t turn over.

Meanwhile, some also say the bike dies on occasion and struggles to come back on.

These issues are frustrating for many owners as the cause of the problems is hard to determine. In fact, you may have a spanking new battery and still have the bike refuse to start. Here are some causes for this problem:

Let’s start with the basics. The battery is always the first thing to check if you’re bike’s having power issues.

If the battery is bad,  or if the terminal connection is loose, your bike isn’t getting enough juice to start up.

Battery terminal connectors are the metal positive and negative ports on the battery and the correlating pieces on your motorcycle that screw your battery into your bike’s wiring harness.

If you’re fortunate, the power issue could be just that the connection between the two is loose. Motorcycle engines tend to vibrate, and this can loosen screws from time to time.

Pop the battery compartment cover off, check the connections, screwing them down tightly if they’re loose, and fire the bike up to see if it starts.

If it doesn’t start up, or if the issues continue, pop the battery out and lug it to an auto-parts store and have them test its voltage output and make sure it’s good, unless, of course, you have a voltmeter and can test it yourself.

If you leave your bike unused for a long period, you may have issues starting it up next time you want to ride.

This is because there are components on the bike that are always drawing power from the battery.

Motorcycles use a part called a stator that generates power while the bike is in motion to charge the battery. If the bike isn’t moving, the electronic system is sapping power from the battery. Eventually, it’ll drain, and your bike won’t start.

For an extended amount of time, if the bike is sitting, hook the up to a trickle charger to supplement the lack of charging.

Be sure to use a charger compatible with your particular battery, and follow the instructions carefully to avoid damage to the battery.

The stator is the coil of wire that lives inside the engine case. A magnet spins inside of it, generating an AC (alternating current). The AC flows through the rectifier/regulator, converting it to DC power at a consistent output.

As engine speed accelerates, the stator outputs more and more power, and if left unregulated, it can overcharge the battery and cause the engine to explode.

That’s where the rectifier/regulator comes in.

The rectifier/regulator is the component responsible for sustaining the appropriate current. If your rectifier is bad, the battery will be damaged. If the stator is bad, your battery isn’t charging while riding, meaning it’s outputting more power than it’s generating, and eventually, it’ll die.

If you’re riding your bike regularly and your battery won’t hold a charge, you’ve replaced the battery, and the new battery is having the same issue, inspecting the stator is the logical next step.

If you’re having issues with batteries overcharging and exploding, there’s a good chance the issue is the rectifier/regulator.

One reason many people hate electrical problems is because of the multiplicity of components in the electrical system.

As such, many electrical components could cause starting problems.

Here are some electrical-related things that may be responsible for your bike’s failure to start:

General Pros and Cons of the Yamaha DragStar

Here are the most important selling points and shortcomings of the Yamaha DragStar:

Here are some positives of the Yamaha DragStar:

The Dragstar was designed for those who desire relaxed cruising performance.

This means you will have more than enough power at low speeds, which ultimately means you can ride quickly yet comfortably.

Thanks to the air-cooled engine design, the DragStar doesn’t get unbearably hot, even in stop-and-go traffic.

The engine has a well-designed heat dispersion system that features cooling fins to reduce heat and oil-cooling integration.

With its chrome painting, bobtail rear fender, retro heel-and-tore shifter, we’d forgive if you think the DragStar is some expensive classic bike.

The DragStar’s design is amazing and remains a head-turner always.

The following are common issues with the DragStar:

“The Yamaha DragStar is a fun and hassle-free way to enjoy your cruising. It has a low, comfy seat, ease of use, and nice styling. Add that to a low price, and the DragStar makes a good case for itself as an alternative to Harley’s 883 Sportster or Triumph’s Bonneville.”

What’s The Resale Value On the Yamaha DragStar?