Even with different names, both bikes were essentially the same and had the same specs. The V Star 250 offers a classic-cruiser look and excellent gas mileage that will appeal to any budget-conscious rider.

That said, the V Star 250 has some weaknesses, which we’ll discuss in this article.

We’ve compiled a list of grievances from owners of this particular model to give you an idea of what problems to expect on this bike: 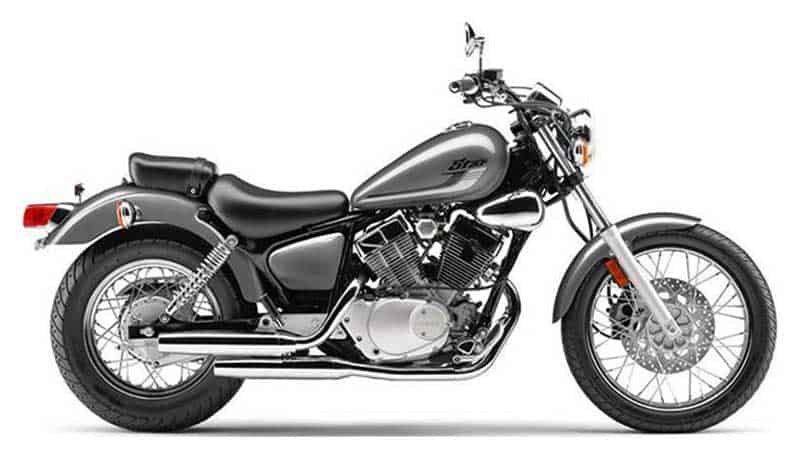 Some V Star 250 owners have reported experiencing starting problems on their bikes.

Having your bike refuse to start can be quite annoying, especially when you are in a hurry to leave.

Luckily, we’ve helped compile a list of possible causes of this problem:

A bike needs fuel and won’t run if fuel flow is restricted.

Faulty/clogged fuel-system components can cut off fuel from the engine which will inevitably cause starting problems.

Any of the following things can cause poor fuel delivery:

During the start-up process, the ignition fires the fuel-air mixture in the combustion chamber.

This provides the engine with the power it needs to run. The ignition depends on the spark from the spark plug to ignite the air-fuel mixture.

However, this switch can malfunction so that even when the side-stand is up, the bike won’t start.

If your battery has a lower-than-normal voltage, it may be dead/weak.

Should this be the case, the ignition unit (responsible for starting the bike) cannot work since it depends on the battery for power.

Over time, the battery terminals can suffer from corrosion and damage.

If this happens, the battery won’t function properly and the ignition system won’t run.

Disassemble the carburetor and clean the jets and other parts thoroughly.

You should do this, especially if the bike in question has sat for long.

Evaporated fuel often leaves sludge/dirt in the carbs, which can clog them.

Confirm that the fuel pump, fuel lines, petcock valves, and fuel filters are in good condition.

In addition, endeavor to clean out any material or dirt buildups in the fuel system.

You can know if the battery is still good in two ways.

First, you can measure the battery’s voltage with a voltmeter.

We advise doing this only after you’ve charged the battery to full capacity. If the voltmeter reveals a voltage lesser than 12.5V, it means you need a new battery.

Alternatively, you can do a load test.

Here’s how to carry out the procedure:

Watch closely to see how these parts respond. For example, if the turn signals stop flashing or flash much slower, then your battery is faulty.

Similarly, if the horn sounds weak, it’s likely your battery is dead.

If a bad battery causes starting problems, you will need to buy a new one.

This issue is mostly common on the older V Star 250 models.

The riders complain that the engine stutters under acceleration.

So what is an engine stutter?

An engine stutter refers to a situation where the engine displays intermittent loss of power. Usually, the engine’s speed will fluctuate and won’t be able to move past a certain point. In such cases, the bike will chug along like a broken steam train.

Engine sputtering can be problematic and even dangerous, particularly if you are on a busy highway when it occurs.

What Can Cause the Engine to Sputter?

A likely factor responsible for engine stutter is an ineffective spark plug.

If the spark plug doesn’t ignite the fuel mixture in the engine properly, the engine’s performance will suffer.

Soon enough, problems like sputtering will pop up during the ride.

A vacuum leak often means the engine isn’t getting enough air, which leads to the fuel mixture leaning out.

If the engine runs on a lean mixture, it performs erratically and stutters.

Any of the following things can cause a vacuum leak:

A gas leak in the carburetor will starve the engine of fuel and cause it to stutter.

Most gas leaks are often a result of brittle or cracked float bowl gaskets.

Signs that the float bowl gasket is bad to include the smell of gasoline and visible leaks around the area.

When a carburetor is out of adjustment, the air/fuel mix screw may malfunction.

In such cases, the engine may run rich (too much fuel) or lean (too much air); and the engine will sputter under either of the two conditions.

Other causes of engine sputtering include:

Check for any signs of corrosion and replace it if necessary.

The intake boots are found between the carburetor and the engine and are cheap and easy to replace.

These plugs are often cheap and easy to install.

If you detect the carburetor is out of adjustment, then it needs tuning.

Carburetor tuning is a fairly simple process that you can carry out yourself.

The V Star 250 models are known to experience the following electrical problems:

Some owners have complained that the batteries on their bikes fail to charge for no reason.

Often, this problem is because of a fault with the charging system (e.g. Regulator-rectifier). Some diagnoses traced the problem to a defective battery.

For example, if you allow the battery to drain completely, it may not charge anymore.

Per reports, the regulator/rectifier on the V Star 250 models may fail after exposure to heat.

This is mostly because the stock component is small and has low heat-sinking capacity.

As such, it tends to overheat and may stop working.

Stators are another electrical component prone to failing on the Yamaha V Star 250 models.

Some reasons adduced for the failure of the stator include:

General Pros and Cons of the Yamaha V Star 250

Here are some pros and cons of the Yamaha V Star 250:

Here are some of the Yamaha V Star 250’s top-selling points:

The Yamaha V Star 250 has scooter-like gas mileage and offers a whopping 78mpg.

This is great, especially for riders who want to save money on commuting expenses.

The V Star 250 has a small, lightweight chassis that makes it easy to ride.

Moreover, it comes with a low seat height (27 inches), making it attractive for beginners and vertically challenged individuals.

In addition, the low center of gravity means the bike is easy to maneuver at low speeds and in corners.

If you’re new to the world of two-wheeled vehicles, the V Star 250 may just be the bike you need.

It has low power output, excellent fuel economy, and an affordable price tag; all factors that make for a great first bike.

Here are some shortcomings of the Yamaha V Star 250:

“The V Star 250 is a good entry-level bike and with a 250cc engine rated at 78 mpg, it is a contender for your choice of an economically sound cruiser… Chrome details accent the engine and side covers to give it that ‘big-bike’ look, but no matter the look, it’s still a 250.”