The MT-10 is the flagship model of Yamaha’s Masters of Torque (MT) motorcycle range.

Introduced in 2016, the model has won buyers’ hearts with its nimble handling and solid engine performance.

However, before you buy, you must know common problems with these bikes.

This article will go over some issues encountered on the motorcycles and outline possible fixes to help you. 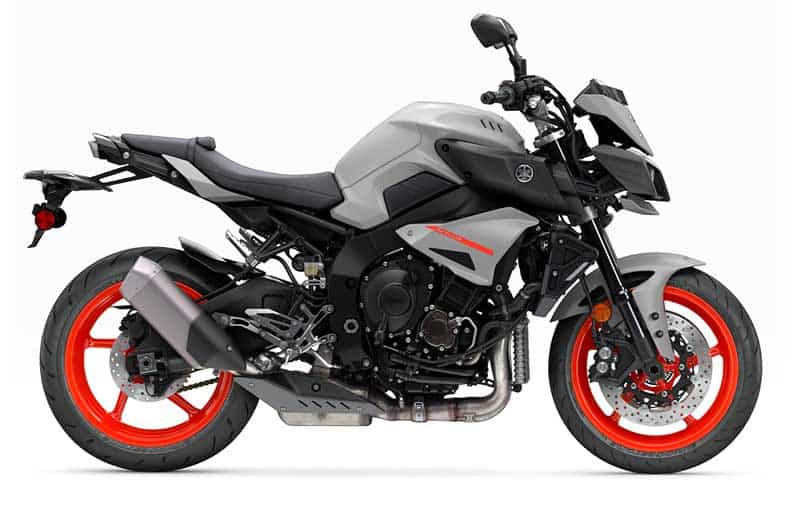 A few owners have reported cases of the engine on their bikes blowing up.

Sure, these owners are few and in the minority. Still, we included this issue on the list because a blown engine is an expensive problem to fix.

Even when the bike is under warranty, the engine rebuild process may be lengthy, especially if parts are not available.

Based on the complaints of the affected owners, the MT-10’s engine can fail irrespective of mileage. In fact, most of the affected bikes were low-mileage bikes (3,000-6,000 miles). Therefore, age is definitely not a factor that influences engine failure on this model.

Some owners admit to riding the bikes aggressively, which explains a lot. Yamaha engines are reliable and can tolerate hard riding habits. Pistons need time to break in, so a motor should be broken in gently for the first 1500 miles or so, giving the pistons time to expand.

If you’re lugging low RPMs or revving low gears high during the break-in period, you’re susceptible to problems down the road.

Signs your engine has blown:

Most of the cases we’ve encountered had the ECU flashed during the installation of after-market upgrades, bypassing the power-governing and environmental limiters set in place by the factory.

Whether the ECU is flashed or not, any upgrades to your air-intake or exhaust system require a retune on air-fuel ratio. If this doesn’t happen, the like could run lean- meaning it’s getting too much air and not enough fuel. If a lean running motor is pushed to its limits, you run the risk of blowing the motor.

Another issue we’ve encountered was seized engines- engines that weren’t lubricated properly, so they seized from the friction.

A few of the engine-blown MT-10s traced the problem to oil starvation in the engine.

They say the engine oil couldn’t reach some parts of the engine. Forced to operate without lubrication, the components became excessively hot, eventually leading to total failure.

In one case, the bearings, starved of oil, seized to the crank and broke the rod, leading to catastrophic engine failure.

We say this all the time, but the best offense is a good defense:

This motor is sealed and liquid-cooled; it might running hot inside without you feeling it from the outside. Your check engine SHOULD alert you if the bike-guts hit dangerous temperatures, but routine checkups are the best way to know for sure how everything’s performing.

If your engine goes out, the only option is to buy a new one or rebuild the previous engine.

If the bike is under warranty, you may pay a tiny fraction of the repair cost.

An out-of-warranty bike is a different animal altogether and will cost more to repair.

This is rare, but we have encountered some complaints about the MT-10 running rough and performing poorly.

Some problems associated with this issue include:

A likely cause for your engine running rough is a bad air filter.

If the air filter is clogged, the engine’s air intake will reduce and cause an imbalance in the air-to-fuel ratio. This will eventually cause the engine to run lean, which will lead to a rough idle or stalling.

Bikes shake and rattle while they ride, and screws can come loose. I’ve known more than a few riders who think they have a major issue with the bike only to realize that their battery terminals need to be screwed back down.

A few 90-degree turns, and they’re back on the road running optimally.

Our research spotted some mentions of MT-10 riders finding it difficult to shift into a lower gear.

A few riders reported issues shifting in the low-end gears while RPMs are decelerating.

Intermittent difficulty downshifting is common on any bike. When your RPMS are high and you pull the clutch in, the clutch-plate disengages from the flywheel so that the RPMs don’t transfer from the flywheel to plate, but the wheel’s still spinning.

Put simply, it creates some heavy force, and sometimes that force can pull on the gears.  The common cure for this is releasing the clutch, putting a quick brap on the throttle to boost the RPMs, and then pulling the clutch lever back in and shifting again.

If difficulty shifting is frequent, however, something needs to be adjusted.

An off-kilter shift linkage may be responsible for the notchy gearshifts.

A badly adjusted shift linkage makes it hard for you to downshift from any gear. Similarly, inadequate lubricant in the shift linkage may also cause an inability to switch to a lower gear.

Again, the best solution for a lot of these common issues is routine inspection and maintenance in adherence to Yamaha’s suggested service schedule. Changing oil and inspecting and lubricating linkage is all part of it.

Unlike a throttle lock, which holds a bike’s throttle in place, the cruise control system maintains the bike’s speed by adjusting the throttle electronically, using a system of sensors.

With this feature, your bike can move at a selected speed without you twisting the throttle. It’s a helpful feature, especially if you go on multiple long-distance rides.

We’ve encountered more than a handful of complaints about cruise control shutting itself off or refusing to activate.

For a few of them, the fix was easy.

Stuck spring sensor: Let’s start with the easiest, which is, fortunately, the most common cause in this situation. There’s a spring sensor behind the brakes that deactivates cruise control automatically upon braking.

This is an important feature, as you don’t want your brakes competing with acceleration, a recipe for disaster.

After riding in the rain, washing your bike, etc., debris builds up, and this little spring tends to get stuck and doesn’t retract fully once the brake is released, leaving the cruise control deactivated indefinitely.

A fault code doesn’t always mean something is wrong with your bike.

For example, cleaning your bike’s chain on a stand with the engine running will cause a fault code.

This fault code will disable the Cruise Control feature until it is cleared out of the ECU.

Faulty/stuck clutch switch: Like with the brakes, the cruise control deactivates when the clutch is pulled in.

Usually, the clutch switch only kicks on when you engage the clutch.

A faulty clutch switch may activate even when the clutch hasn’t. This will fool the cruise control system and cause it to shut off.

General Pros and Cons of the Yamaha MT-10

Here are the selling points and shortcomings of the Yamaha MT-10:

The Yamaha MT-10 comes with a 998cc inline 4-cylinder engine that features the Crossplane Crankshaft technology.

This also happens to be the same engine technology featured in the iconic Yamaha YZF-R1 superbike.

The difference being that the MT-10’s engine has been specially tuned to produce huge amounts of low-and-mid-range torque and breathtaking power.

The MT-10 model comes standard with a slew of digital features designed to give you, the rider, complete control of the bike.

First, there’s the YCC-T ride-by-wire throttle unit that gives riders precise engine control. There’s also a D-Mode feature that allows you to control engine responses at the snap of a switch.

This model also has a Traction Control System (TCS) feature that delivers excellent traction and stability on various road conditions.

Finally, the model comes with a cruise control system that increases rider comfort.

With this feature, you can easily select a set speed, especially on long-distance rides.

Given the speed of sportbikes, good brakes are necessary.

Luckily, the Yamaha MT-10 doesn’t disappoint in this regard.

At the front, a pair of 320mm discs provide excellent stopping power.

The rear features a 220mm brake disc as well. Both brakes are AND-equipped, meaning you can safely brake on wet surfaces.

Rather than using steel, Yamaha opted for aluminum.

The result is a light frame that makes for nifty and responsive handling.

Moreover, thanks to its use of a strength-rigidity balance, the Yamaha MT-10 is stable in corners and takes turns like a champion.

Here are some drawbacks of the MT-10:

“The Yamaha MT-10 is an absolutely superb, firmly committed sportbike that happens to have upright, comfortable ergonomics. The MT-10 is so confidence-inspiring it is straightforward to ride very, very fast. It handles brilliantly through corners fast and slow, and it will smear big broad rubber tire stripes on corner exits if you want.”

What Are the Resale Values On Yamaha MT-10?

Note: These prices may vary based on mileage and location.