Toyota introduced VVT systems way back in 1991, and the upgraded Variable Valve Timing-Intelligence (VVT-i) technology is still used in many modern cars.

The VVT-i is the latest offering from the Japanese automaker, making its way into the industry in 1996.

VVT in an engine improves control of engine output, resulting in a more fuel-efficient and reliable vehicle. VVT-i engines mostly focus on the early and late closing of the valve, directly affecting pumping losses in load conditions.

While this system reduces nitric oxide emissions, it also minimally affects torque output. With up to a seven percent improvement in fuel efficiency, it’s no surprise that Toyota is sticking with VVT-i engines.

Although this system is without a doubt one of the most innovative in the car industry, not all brands incorporate it into their vehicle models.

In this article, we’ll be looking at some great cars that don’t have variable valve timing with intelligence.

Let’s get straight into it. 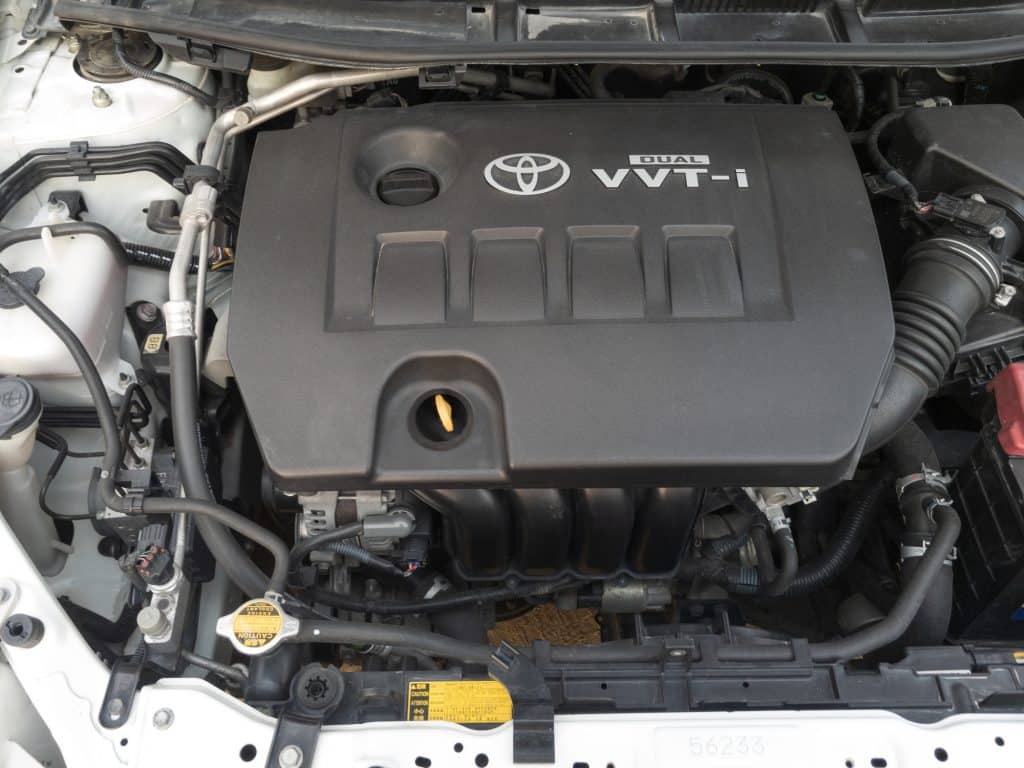 Honda made a remarkable change to the Accord 2.0T, which was producing the highest torque output ever for Honda Accords.

Powering the 2018 Honda Accord is a 2.0-liter VTEC Turbo engine that can deliver 192 horsepower and about 192 pound-feet of torque. This signifies a great increase in both power and performance in this Accord lineup.

Although the Accord gets average reliability scores, it can also be an alternative to some of the best in the same segment.

The 2018 Accord is a mid-sized family sedan that is not only affordable but offers modern safety features and a great infotainment system. The interior gets praise for being roomy and the suspension and drivetrain make for quite a comfortable drive.

Trademarked by Honda, VTEC (Variable Valve Timing and Lift Electronic Control) technology is a type of VVT system in the 2018 Honda Accord. VTEC and VVT are both similar lift systems that assist and improve combustion in an engine.

Honda’s VTEC system was designed to use separate camshaft profiles. The engine computer then chooses between these profiles.

In a VTEC engine, this combines the fuel efficiency of low RPMs together with the stability of the higher RPMs. Although Honda developed it back in the 90s, the VTEC is one of the most common forms of Variable Valve Timing.

A quick difference between the VTEC and the modern i-VTEC is that the VTEC adjusts the camshaft for the timing and the lift.

Related: How Long Do Honda Accord Last? (Solved & Explained)

The 2015 Audi A3 was redesigned with luxury, efficiency, and space in mind. The A3 is smaller than others in the same segment, but it still feels premium and powerful.

The A3 is a sibling to the much bigger models from Audi like the Audi A4 and Audi A6. It replaces the older hatchback A3, but this is not an issue because this model is just as feature-packed.

This 2015 model comes in both convertible and coupe, sporting an elegant and modern look together with a premium interior. Both come with a turbocharged gasoline four-cylinder engine with a diesel option.

In this particular model, Audi opted to go with a conventional VVT engine. One benefit of a VVT in the Audi A3 is the increased engine speed.

Variable Valve Timing in this Audi A3 assists the valves to operate earlier or later for efficient fuel flow under all conditions.

A smooth relationship between the camshaft and the crankshaft ensures higher fuel efficiency scores and better reliability.

If the engine is maintained properly with regular oil and filter changes, there should be minimal problems with the VVT system in the Audi A3.

With that said, if an owner notices symptoms of a failing VVT system like whitish smoke from the exhaust or bad smells, it’s best to talk to a mechanic.

The Audi A3 does not have a modern VVT technology such as the VVT-i system on most modern Toyotas. The Variable Valve Timing with Intelligence (VVT-i) is an upgrade to standard VVT and delivers better fuel efficiency.

The Volvo brand is one of the most reliable cars in the industry if well taken care of. Volvos have some of the best safety ratings for cars and now also have modern features to back them up.

The 2015 Volvo S60 is an entry-level luxury sports sedan created with performance and efficiency in mind. The stop-start technology, together with an enhanced eight-speed transmission, makes this model a good contender in its class.

Available in four trim levels, the best-selling trims are the 2.0-liter engine that is both turbocharged and supercharged.

A VVT system in the S60 essentially tunes the valve timing by shifting the angle of the camshaft as needed. This is a suitable engine management system for the S60.

Advantages of a VVT Engine

When the S60 is at high speeds, the inlet camshaft in the VVT system is rotated at a 30-degree angle. This results in an earlier intake and therefore fewer emissions.

The engine management system in the S60 is also actuated by hydraulic gears.

With responsible maintenance, the Volvo S60 should last an owner about 200,000 miles, coupled with an excellent safety rating. When it comes to fuel efficiency, the S60 gets an average of about 22 MPG for city driving and 29 MPG for highway driving.

The Variable Valve Timing Control Solenoid on the Volvo S60 has been known to cause some issues. A replacement solenoid can set the owner back between $300 and $400, with labor costs going as high as $250.

A certified mechanic or the dealership should be able to replace the solenoid and get the VVT system back in working condition.

Last but not least on our list is the enticing Honda Civic Type R. The Civic Type R might seem like it was designed only for the racetrack, but this is not entirely true.

This hatchback from Honda is confused as a performance car for the track only. Honda made sure that the design and technology make this model great as a daily driver too.

Aggressive and garish is how most reviews describe the looks of this 2018 Type R.

However, the balanced performance of the engine is what sets it apart from the others in the same segment.

2018 Type R Civics sport a six-speed manual transmission powered by a 2.0-liter turbocharged engine with 306 horsepower. The gearbox feels smooth and so does the predictable clutch, giving a sporty feel during upshifts and downshifts.

Much like the previous model, the 2018 Civic Type R has a VTEC turbo engine. The most notable difference between the two is the increase in output from 310P to 320PS.

VTEC (Variable Valve Timing and Lift Electronic Unit) is a system developed and trademarked by Honda. Similar to a VVT, the VTEC from Honda also assists engine output while improving fuel efficiency.

Compared to the upgraded i-VTEC (Intelligent Variable Valve Timing and Lift Electronic Control), this new technology can open the camshaft as far as 50 degrees.

Advancements in variable valve timing technology affect how fuel-efficient a vehicle is by improving the valve train system.

With governments now imposing strict fuel emission penalties, it is in the automaker’s hands to make a vehicle as efficient as possible without risk for the environment.

This is why more variations and upgrades of the standard VVT are showing up. More intelligent VVTs are durable and offer twice the benefits of a standard Variable Valve Timing system.

With more stringent greenhouse gas emissions showing up in many countries, Variable Valve Timing systems will always be improved.