Long before Polaris revamped the headdress logo and engineered the Thunderstroke motor to be one of the best V-Twins in the game period, there was the original Indian Motocycle [sic], the company, the first American-made motorized bicycle in history.

The story of Indian goes back to the late 1890s, with 1901 being the year the first Indian motorcycle was revealed to the American public and, soon, the world.

There’s no doubt that today’s Indians are some of the most potent and high-performing bikes on the market, but why are Indian Motorcycles called Indian? 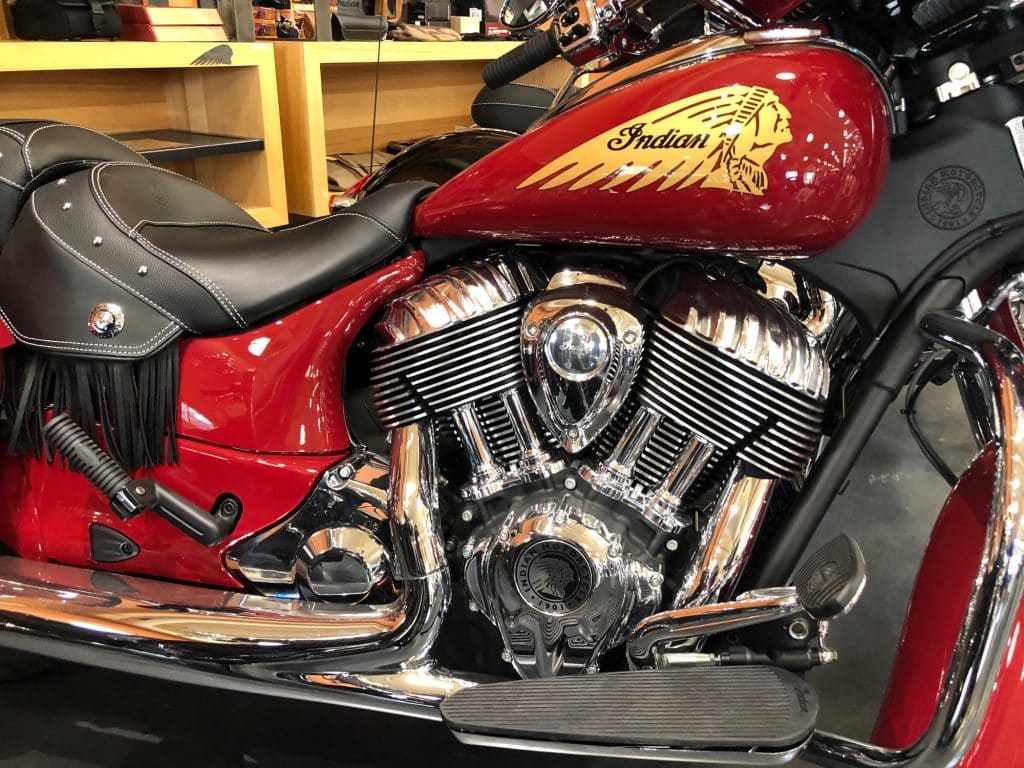 Here’s the Short Answer to Why Indian Motorcycles Are Called Indian:

Indian Motorcycles began as Hendee Manufacturing company in 1897 as a bicycle company. With bicycle models like “Silver King” and “Silver Queen,” Hendee wanted more American flare; he named a model the American Indian in 1898 to peak interest in foreign markets. The brand became Indian in 1901.

How Did Indian Motorcycles Get That Name?

The Indian Motorcycle Company was initially named after a pre-existing bicycle model designed by one of the co-creators of the first American motorcycle. Oscar Hendee and George Hedstrom.

At the early edge of the 20th century, when bicycle racing was all the rage in the States, racers were importing motorized bicycles from Europe called Pacers, powered by small combustion engines.

These European “Pacers” weren’t reliable, and a young Swedish designer named Oscar Hedstrom thought he could do better.

To see his vision through, Hedstrom partnered with a pro bicycle racer and manufacturer named Hendee, who’d already had a model called the American Indian. The two designers joined forces and created the first American motorcycle, a motorized bicycle.

The original two engineers called it an Indian to distinguish it from the underpowered and unreliable Euro-imports by giving it what they considered a striking American name.

Hedstrom left the company in 1907 after a dispute about stocks; Hendee retired to his farm around 1913, but the iconic Indian name was set in stone, along with the imagery these men used to project themselves as “American Made.”

But it didn’t last.

In the 1950s, Indian motorcycles tanked after Harley-Davidson used their iteration of the OG Indian V-Twin-powered bicycle concept to corner the market.

Not until 2014, three years after Polaris Industries bought the Indian name, that they finally launched their debut line.

Polaris Indians are indeed American motorcycles manufactured in Spirit Lake, Iowa, in a factory of 550 pros.

Polaris Indians are world-class machines. But while some speculate whether or not Polaris would have been successful if the brand wasn’t so historically iconic, others think new ownership was the perfect opportunity to establish a new, less-offensive brand image.

Related: Do Harleys Ever Go On Sale? 7 Tips For Good Deals

Is Indian Motorcycle Changing Their Name?

After the Cleveland Indians changed the name of their baseball team and Jeep discontinued the use of Cherokee as a model, Indian Motorcycles stated that they worked hard to honor the iconic brand image while also listening and connecting to stakeholders and communities to update their forward path.

Here’s the official quote from Indian Motorcycles, as reported by Inside Hook:

“Since we acquired Indian Motorcycle in 2011, we have worked to honor the hallmarks of this iconic brand while respecting our riders and the communities we serve. Like any respected brand, we are actively listening, learning, and connecting with all stakeholders to determine the best path forward for our brand.”

Again, Polaris effectively used the historical Indian image to certify the world-class engineering behind them as American and the stuff of legends.

They use language like “America’s First Motorcycle Company” to insinuate an edge over Harley-Davidson. Many, not all, agree that Polaris makes more impressive machines than the long-time dominator of American motorcycle culture.

Some of those fans celebrate the return of the classic headdress image. Plenty agree the name is dated, and the imagery is offensive.

To be clear, I own an Indian Chieftain, a name some consider to be at the top of the list of offensive bike titles. To be sure, it’s a beautiful machine.

I’d ride the rubber off the thing even if they changed its name, but I’m not Indigenous; I don’t feel I have the right to have an opinion on anything besides the bike’s performance.

Who’s call is it to make whether it’s ethical or not for Polaris to capitalize on the Indian logo? At the end of the day, all opinions on the matter should be making way for the views of Indigenous Americans.

I crawled around for a while before finding a stellar interview Inside Hook did with the founder of a significantly large Indigenous Motorcycle Club. Here are some of his thoughts, as published over at Inside Hook:

“They are using Indigenous people as mascots for their motorcycles… I mean, look, is Indian Motorcycle using Native Americans and a Native American image for financial gain? Absolutely… “Are they giving back to Native country for that use? Not that I know of. That becomes an issue in general right there.”

[The Club Founder] did say that the company had previously reached out to get his opinion on this issue.

While Indian Motorcycle declined to confirm those talks, or any potential outcomes from them, due to their confidential nature, when asked specifically if the company currently has any relationships with Native American groups or organizations, the spokesperson said, “We are committed to engaging Native American communities through advocacy and partnership.”

So, while there are no concrete plans for Polaris to change the name of the Indian Motorcycle Company, they claim to be committed to partnering with representatives from native communities.

Does the Company Get Criticized for Its Name?

Indian Motorcycles get criticized for their name by some members of various Indigenous communities upset by the headdress imagery; others, particularly some excited about motorcycles, gravitate towards the imagery with ownership, incorporating it into their genre of American Biker.

The brand has reached out to members of Indigenous moto communities to seek opinions about using the logo. Still, leadership in such organizations has said they expect the conversations to continue. Eventually, the discussions should lead to support for Indigenous communities.

The situation is tricky, as the primary community whose opinions hold any weight on the issue are divided.

The two-wheeled American Indian Motorcycle dates back to 1901. For better or worse, the image is iconic in biker culture, which has come to be synonymous with American culture.

Perhaps the following action the brand could take to rectify this issue would be to throw some financial love back at the communities whose imagery they capitalize on.

The founder of an Indigenous Motorcycle Club had this to say to Inside Hook:

“There are members of the club who find it offensive, for sure. We have tribal chiefs in our club, we have famous Indigenous actors in our club, so there are pretty influential people in the club who, for some of them, it’s an issue,” Matias said. He described the situation as “a double-edged sword.”

Some people wonder how Polaris has managed to keep the Indian Motorcycle image alive and kick after such controversy exploded for teams like the NFL’s Kansas City Chiefs and Washington Red Skins and the MLB’s Cleveland Indians.

The fact is that, despite their growing popularity, motorcycles are a niche hobby, and Harley-Davidson is still the staple image of American Biker Culture.

The anonymity helps them fall under the Social Justice radar more than big-league sports teams. Indian Motorcycles slips into the cracks with such market domination as the underdog niche choice in an already niche scene.

Some educators say that the contributor is the generality of their terms. Unlike the “Jeep Cherokee” model, which takes its name from a specific Nation of Indigenous people in America, phrases like “Indian” and “Chief” are less clear and more challenging to lay claim to.

While the Indigenous community may be split on the issue, there’s doubt that Indian Motorcycles can do well by sharing some of the profits they earn via cultural imagery with the peoples from which the imagery was derived.

Are Indian Motorcycles From India?

Indian Motorcycles are now owned by Polaris and are assembled in Spirit Lake, Iowa, in the U.S.

The bikes are painted in a facility located in South Dakota. Recently, Polaris opened an additional factory in Poland to assist them in international production.

That being said, are Indian Motorcycles available in India?

India’s large motorcycle market is booming harder than ever, an explosion exaggerated by the launch of Indian motorcycles. The parent company of the modern iteration of the classic American brand, Polaris has sold its off-road vehicles in India for years.

In 2013, Indian Motorcycles added a line of large cruisers to their still infantile lineup. They took the opportunity to launch the line to the South Asian country’s growing big twin market.

This is a tricky subject to tackle. As I said, I myself am the owner of a modern Polaris Indian Chieftain. It’s easily the highest-performing machine I’ve ever owned, and I love its vintage aesthetic, though the swooping fenders are just as iconic as the brand’s name.

I would repurchase the bike in a heartbeat—without the headdress logo.

Is appropriating the headdress image at best a dated business practice and at worst offensive? I’m inclined to leave that decision up to the Indigenous community.

While the brand seems to honor a line of communication with those communities, it’s safe to say that channeling some profits into support certainly wouldn’t hurt the conversation.