As far as many of us are concerned, Kawasaki Motorcycles have come to hold the title of the fastest production bikes.

There are all kinds of figures out there; between the high numbers on street-legal Ninjas, the most popular sports bike in the world, the claims made by heavy-modded street racers, and the rip-roaring reviews boasting high-speeds on track-only production Kawks.

With all the swirling info out there, you’re likely wondering just what the top speed for Kawasaki Motorcycles is?

We give you the nitty-gritty of this topic below. 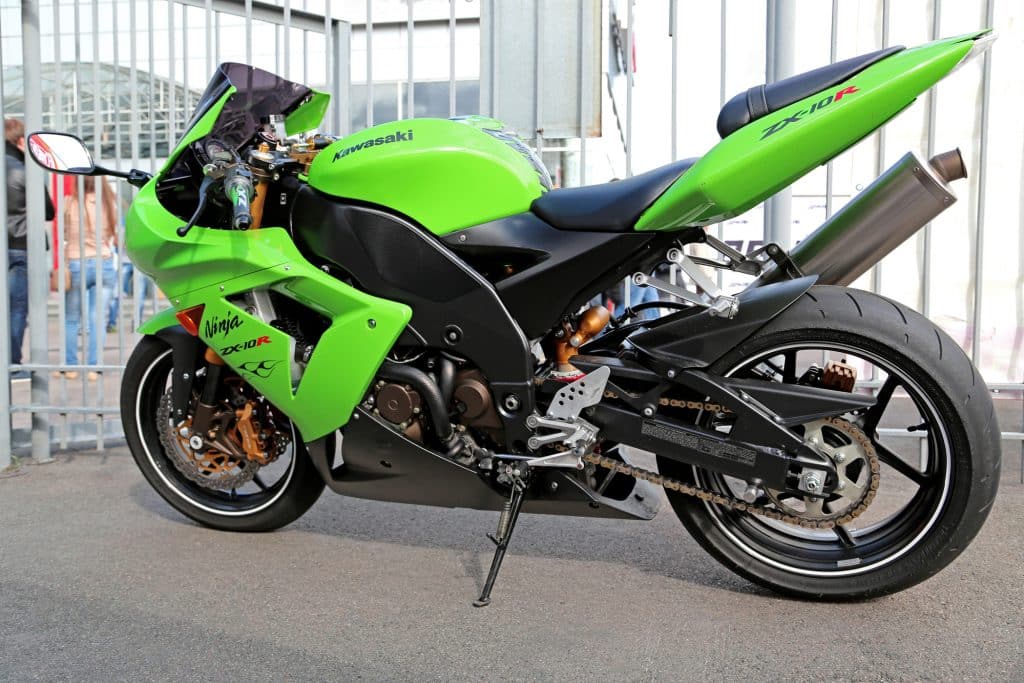 Here’s the Short Answer to What’s the Top Speed for a Kawasaki Motorcycle:

The top speed on a Kawasaki Ninja H2R is 250 MPH, thanks to its 310 HP motor. There’s speculation that the Kawasaki H2’s specs allow speeds of 260MPH, but it’s never been recorded. Still, it’s a 998cc inline 4-cylinder racebike engine that’s only legal when ridden on a closed track.

What Is the Fastest Recorded Speed on the Bigger Kawasaki Models?

The fastest recorded speed on a Kawasaki H2R is 250 MPH.

Initially, it tested at 240 MPH, but a Turkish pro-rider hit 250 on a closed track. Though some say he did some modifications before achieving that figure, others say the mods he did were light, if any, and that the bike appeared to be primarily stock.

One thing’s for sure, though—the Kawasaki H2R Ninja packs so big a speed punch it’s not considered street legal.

Still, there are plenty of bike-builders in the know out there that speculate even higher speeds for the Kawasaki Ninja H2. I’ve found claims of 250 MPH in a few places, including theories that, with the right rider, gearing, and track conditions, the H2R’s specs likely allow a top-speed that’s closer to 260.

Either way, like we said a few times now, the H2R is for track use only, meaning its engine is tuned for racing to the point that it’s not even legal to ride it on a public road.

A version of the H2 is down-tuned to meet street legal requirements; it’s set speed records in its category, to be sure.

Have These Models Been Modified?

Most of the Kawasaki speed records have been set on bikes with light modifications. However, the rider who set the 250 MPH record on the Kawasaki H2 intentionally set out to break the record on a bike that was as close to stock as possible; the mods were light.

In short, while the H2R that set the records may have experienced some light mods before the track day, they were minimal, meaning that even if you’re on the stock H2R, you can likely go as fast as you’ll ever need to with little to no adjustments.

Are Kawasaki Motorcycles Faster Than Other Brands?

Kawasaki motorcycles are among the fastest production bikes globally; they tend to be neck-and-neck with Suzuki for the actual title of “Fastest Production Motorcycle” year after year.

There are luxury track bikes out there that are faster than both, though less economical for real-world use.

The Kawasaki Ninja series and the Suzuki Hayabusa series are in constant competition for superbike innovations, a tradition that only made both bike lines faster and more hi-tech year after year.

The MTT racebike brand makes a bike called the 420RR that stocks a true gas turbine motor that produces 420 horsepower by way of 500 foot-pounds of torque.

In addition to its engine specs that smoke anything else out there, MTT fits the Carbon-Fiber fairings and wheels onto the 420RR’s aluminum-alloy frame, making it more lightweight than it even needs to be.

“RR” stands for race-ready, and with a top speed of 273 MPH straight off the production floor, MTT gives Kawasaki a run for their money.

MTT is a luxury brand, much more expensive than Kawasaki bikes, and much more high-maintenance, making Kawasaki the more economical choice for riders looking for a rapid-firing production motorcycle.

Kawk’s philosophy is geared toward designing bikes that carve corners like a razor-sharp racer while powerful in low RPMs for rugged performance around the speedometer.

When it comes to a superbike that can handle the speeds without feeling like you’ve been sucked through a black hole while straddling a fencepost, the Kawasaki ZX-10R is as good.

It’s still a fire-breathing speed demon at 13,000RPMs, but its low rev power band doesn’t get chopped like many other track monster motos on the market.

The wide range of power means consistent performance from city to canyon and from town to track without rattling your wrists down low or up high, like the more streamlined-RPM performers do.

And that’s without mentioning the industry-leading Showa suspension that balances perfectly between rapid racing response and effective bump-dampening in everyday use.

In short, Kawasaki handles high-speed riding better than any motorcycle out there. And while bikes like the Suzuki Hayabusa and even Kawasaki’s own Ninja H2R are faster, the Kawasaki ZX-10 is celebrated for handling speeds more gracefully in a wider range.

How Can You Make Kawasaki Motorcycle Faster?

Have them installed by a pro after much research; some parts might make your Kawk faster but cause engine damage, putting you and the bike at risk.

We suggest consulting a pro-mechanic experienced with your particular year model Kawasaki before attempting any of these upgrades; incorrect installation can damage your engine or cause an accident due to engine failure.

Here are 6 Ways to Make your Kawasaki Motorcycle Faster:

1. Get Power Commanders and Exhaust Upgrades

You can upgrade your Kawasaki’s exhaust system down to the header pipes to boost your throttle response, power, and torque while dropping a significant amount of pounds simultaneously; it’ll make your Kawk sound meaner than stock in the process.

Make sure you stock a power commander and do a proper re-tune to avoid drastic shifts in the air/fuel ratio and performance.

Just in case you’re on an older or base model, an adjustable suspension package not only does an 18 on your high-speed handling, but adjustable compression and suspension also allow you to customize your bike’s response based on your unique style of riding, allowing you to go faster without sacrificing stability.

3. Get a Pro to Set Up Your Suspension

Whether you’re on a high-end super Kawk that came stock with the best shocks in the biz, or you put some fresh suspension on your Kawasaki for all the reasons mentioned above, customizable suspension only provides benefits if you know how to set it up to your riding style.

This is especially essential if you plan on high-speed track riding. A poorly adjusted race suspension can cause serious issues resulting in crashes at high speeds.

A suspension upgrade only goes so far if the wheels on your Kawasaki are causing resistance.

Do some research and find you an all-star set of lightweight racing wheels intended for use on your specific year model Kawasaki to improve your aerodynamics, speed, handling, and track time.

5. Use the Spec Tires

Ok, so your Kawasaki has adjustable suspension; it’s been set up by a Kawk-master mechanic based on a thorough conversation about your riding style.

Then, you took our advice and grabbed a lightweight set of racing wheels engineered for use on your specific year model Kawasaki at high speeds. Your next order of business is to make sure you’re rolling on the proper tires.

All tires have distinct purposes. For example, if your Kawasaki is a track bike, you’ll be using a much different setup than if you’re roasting pothole-laced city streets.

Now the “best tire” for your particular year model is up for debate; there’s likely already a two-year-old thread devoted to the hot topic of tires. It depends on your prerogative as a high-speed rider.

Knowing what you’re looking for is everything when pairing the proper tires with your suspension and wheelset.

If you’re planning on doing high-speed riding, you need to upgrade your Kawasaki’s actual disc brakes to get the stopping power you need to speed.

Again, check with a pro for the best options for your specific year-model Kawk. Still, the general rule for race braking is the bigger and lighter the brake disc, the faster it’ll make your Kawasaki motorcycle.

10 Fastest Superbikes Kawasaki Ever Made | hotcars.com