The Kawasaki GTR 1400 is one of the most solid sport-touring options on the market.

It blends mind-blowing performance and rider comfort and is at home on either the highway or track. But like every other motorcycle, owners of the GTR 1400 have encountered a few issues over the years, and we’ve analyzed their findings and compiled some tips.

Let’s dive into some troubleshooting!

Here are the most widespread issues owners of the Kawasaki GTR 1400 face and what they did about it: 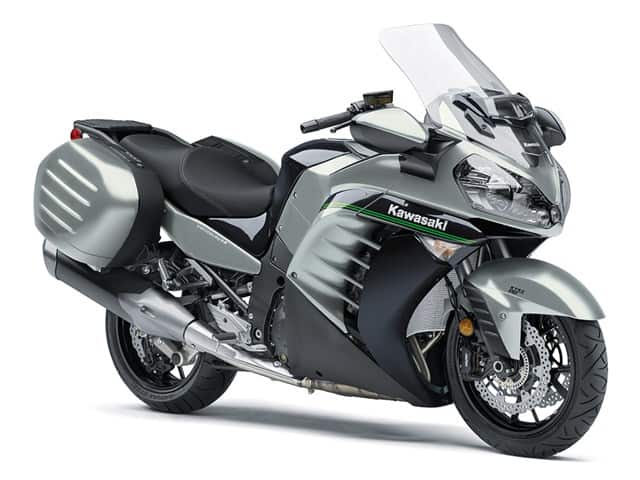 In this system, the key fob signals the motorcycle’s ECU via a short-range antenna.

If the key fob and the bike’s ECU don’t communicate, the ignition won’t turn over; even if you insert the ignition key, the motorcycle won’t come on.

With the KIPASS, your bike won’t start unless it receives a signal from the original key fob. This serves not only as a theft deterrent but offers the bike’s owner peace of mind when leaving their motorcycle unattended for an extended period of time.

There have been reports of  KIPASS-based issues, including:

KIPASS is an immobilizer system installed on the bike’s keys. The system allows communication between the bike’s Electronic Computer Unit (ECU) and the head of the ignition key in short radio waves back and forth.

If the head of the key and the ECU somehow fail to communicate, the system malfunctions. This means the bike will become unresponsive even if the key is inserted into the ignition switch; the motorcycle will not start.

The system emboldens the vehicle’s security- it’s hard to crack, which can be a double-edged sword.

If the KIPASS fails, the bike won’t start, even for the owner. It’s designed so that if the key is not within inches of it, then access to the ignition is rejected as a safety measure, so if the ECU thinks the key isn’t present, even if it is, you’re not going anywhere.

Some riders dealt with the problem by hammering the key down into the ignition when the KIPASS was unresponsive.

Another potential problem/solution is a stuck microswitch.

The KIPASS is activated by a micro switch hiding under the 9’Oclock position of the ring beneath the ignition. Gentle prodding with a small narrow screwdriver and some electrical contact cleaner and 3in1 can free the microswitch, allowing the KIPASS switch top hat to activated without bashing it in.

This microswitch seems to be the culprit for many rider’s KIPASS problems; most riders are probably unaware that the switch is there.

When the top hat is pushed down, it’s the microswitch that activates the KIPASS and allows the ignition to be turned on to start the bike, so if the switch is dirty and stuck, the KIPASS won’t engage.

Other GTR 1400 owners have reported the dreaded “Immobilizer Error” message.

Usually, this message signals a failure in communication between the key fob and the bike’s ECU. If this happens, the bike may cut out while riding as the ECU believes the ignition key has been removed.

The problem usually occurs when the key fob runs out of battery power. Stay ahead of schedule and make changing your fob battery part of routine mike maintenance.

A weak battery connection or a faulty ECU could also be responsible.

Here are some DIY fixes for this problem:

Here are a few other troubleshoot to try out if you encounter KIPASS issues.

If none of the above helps, it might mean a new KIPASS system needs to be installed. This can prove to be quite expensive and not a suitable solution for a bike out of warranty.

Still, it’s not recommended to diagnose and fix KIPASS problems on your own. The technology and the lock code system on the KIPASS and fob are installed at the Kawasaki factory.

It would require a system rebuild with the Kawasaki factory software, and these are not easy to come by. Rebuilding the KIPASS is an expensive endeavor.

Fortunately, most of the KIPASS  issues are rectified on the newer models. Kawasaki is great at responding to problems, and the new Kawasaki GTR 1400  showcases their engineers’ critical thinking attributes.

There was a run of older GTR 1400s with rear breaks locking up on riders while riding.

The rear breaks on the affected GTR 1400 models would lock up suddenly while riding. The result is sudden deceleration, regardless of whether you’re throttling up or not. If that happens, it’s important to pull the bike over immediately until you can get the rear brake unstuck.

The riders we’ve encountered who’ve had this issue all said that once they pulled over and pressed the brake pedal up and down while the bike cooled down, it would eventually become unstuck.

Multiple diagnoses reveal the problem caused by a defect in the bike’s design allowing road debris to get trapped between the rear master cylinder rod and a rear brake pedal.

This keeps the brake pedal partially engaged regardless of whether or not the pedal is being pressed down. Sometimes it’s so subtle at first that the rider won’t notice, but over time the caliper would cook.

As the caliper begins to heat up, the brake fluid boils. The pressure of the boiling applies the rear-brake to a full-stop, dragging the bike’s acceleration.

Once cooled the boiled fluid re-condenses and the brake releases.

It all results from the design flaw that allowed debris to get stuck in the brake.

Recognizing the grave danger the problem posed to riders, Kawasaki issued a recall for the affected bikes.

The problem was solved by replacing the rear master cylinder rod end and removing the brake guard. Kawasaki took swift action to ensure that all models on the road have been rectified.

If you somehow ended up with an unsafe model that’s still having the issue, contact your local Kawasaki dealer immediately and have them take action.

Early Kawasaki GTR 1400s were notorious for having brake rotors that warped quickly.

According to owners, these warped rotors often causes a handful of problems, including:

Brake rotors are made to last long and don’t wear easily.

With continued exposure to friction from the brake pads, significantly, if brake pads aren’t being changed often, rotors can incur damage.

Often, the wear affects certain spots on the rotors, making the surface uneven and causing warping.

For preventing rotor surface wear, the best offense is a good defense. Make sure you’re changing your brake pads regularly in adherence to your bike’s maintenance schedule. Nothing diminishes a rotor’s lifespan faster than riding around on run-down brake pads- keep them fresh.

Brake pads apply pressure to the rotors to slow the wheel’s rotation, causing friction, and friction creates heat, especially when the bike is ridden at top speeds for long runs.

The heat will soften the brake pad’s material, which sometimes melts to the surface of the brake rotors.

If material builds up on the rotor surface, even a brand new brake pad won’t grip the metal properly. This reduces braking power, an undesirable circumstance for any vehicle.

First, clean the rotors’ surface: If you detect glazing on the rotors, your best bet is to 86 any material buildups.

Below is a DIY guide on how you can clean the surface of your GTR 1400’s brake rotors:

You could also use a power tool such as a drill-mounted rust removal pad or lathe.

These remove rotor deposits faster, but you must be careful not to create surface unevenness while grinding.

Removing tires from a motorcycle without the proper set-up and tools isn’t a good idea, so if you doubt your experience in the slightest, or aren’t equipped to be wrenching tires on and off a bike, take it to a Kawasaki-literate mechanic and have them deal with the issue.

A decent mechanic will let you know if cleaning the rotors is worth the effort or if new rotors are required.

One of the unique qualities of the GTR 1400 is a combination of exceptional performance and outstanding ride quality.

To start with, the upright seating position ensures riders remain comfortable while riding over long distances. The seat is also sculpted for comfort and allows riders to place both feet on the ground immediately.

There are even grip heaters that keep your hands warm while driving in frosty weather!

With the GTR 1400, you, the rider, are always in control, regardless of the road conditions.

Much of this is because of the Kawasaki Traction Control (KTC) system.

This feature enhances rider control by providing good handling and road grip on all surfaces.

As a rider, your safety is paramount.

Kawasaki recognized this and outfitted the GTR 1400 with modern safety tech designed to ensure safe riding.

A good example is the Kawasaki Advanced Coactive-braking Technology (K-ACT).

Another safety feature on the GTR 1400 bike is the Tire Pressure Monitoring System (TPMS). The TPMS uses sensors to track air pressure levels and displays the information on the LCD meter.

If tire pressure drops to a certain level, the TPMS will alert the rider.

The following are some shortcomings of the Older Kawasaki GTR 1400s:

“Not a one-trick-pony, the big GTR 1400 also has impressive handling credentials in the twisties, allowing you to keep up with most riders in any situation. The large saddlebags are useful, and a 47-liter top box is optional, and the only thing a hard-core tourer will miss is the lack of cruise control.”

“The Kawasaki GTR 1400 ABS motorcycle offers far more than its punch of power. It also defines the sport-touring category by remaining at the top of its class with incredible performance and nimble handling. It’s incredibly capable of both carving canyon roads and cruising comfortably along state highways.”

What Is the Resale Value On the Kawasaki GTR 1400?