Car manufacturers are constantly upgrading their models to improve stability in their cars. This is due to the high number of accidents that involve cars that rolled over. Even more surprising is to see 4-wheel drive vehicles such as the Jeep Wrangler and the Jeep Renegade on the list below.

Due to a high number of Jeeps tipping over, you might be wondering:

According to the NHTSA, the Jeep Wrangler and the Jeep Renegade were among the list of cars most likely to tip over. This is due to the tall construction and high center of gravity.

This comes as a surprise because you wouldn’t think a 4-wheel drive would tip over. They are supposedly built to endure uneven and hilly situations.

Here is the official list released by the NHTSA.

Judging from this list, Jeeps have a higher tip over rate than other cars, especially seeing as it’s got two of its models in the list.

The Jeep Wrangler comes in as the most likely to tip over in Jeep models.

Even though the Wrangler is among the king of offroaders, its tip over rate is surprisingly high.

This might give the impression that the Wrangler is unstable and clumsy in offroading. But, as any Jeep enthusiast will tell you, this is not the case.

In most off-road driving, there is typically no need for high speeds. Lower speeds allow for comfortable manoeuvering of obstacles and climbing hilly terrains. This allows a driver to control the vehicle because there’s more time to react and adjust the wheels. When the vehicle is driving at high speeds, there is less time to adjust and the driver might lose control of the car, resulting in a tip-over.

The Jeep Wrangler is susceptible to tip-overs due to a number of factors.

Here are some of them:

What Makes Jeeps Tip-Over So Easily?

The short wheelbase of a Jeep makes it more likely to tip over. 4x4s and pickup trucks have a higher center of gravity. This makes them top-heavy and results in tip-overs if the balance of the vehicle is thrown off like with rapid direction changes.

Jeeps and other vehicles such as the Toyota 4Runner are usually narrower and taller, resulting in a higher center of gravity. This puts their balance on the low end of the scale, especially at higher speeds.
At higher speeds, a quick jerk of the steering wheel can start to throw the car off-balance.

As the driver tries to compensate in the other direction and does so too much, the car can start a swerve that can’t be recovered from.

A huge factor in tip-overs, not just for Jeeps but for other cars as well, is an external force or obstruction that causes the car to “trip”. An object like a rock or even a pothole on the road can tip the balance of the car off and result in swerving and eventually tipping over.

This can also happen due to a collision with another vehicle or hitting a curb.

Technologies such as electronic stability control and rollover airbags are now getting more exposure to be installed.
Pickup trucks and 4-wheel drive SUVs are typically made to handle rougher driving conditions because of the way they are built. That makes them even more prone to tip-overs because SUVs are typically top-heavy.

This question will come to mind when you think of how Jeeps actually tip over.

Jeeps aren’t any top heavier than other SUVs out there.

The short wheelbase is what makes the Jeep feel unsteady and feels like its heavy on the top. This feeling probably comes from other parts of the vehicle such as the suspension, worn tires or shock absorbers. These parts can make the Jeep feel wobbly or increase vibrations. Since Jeeps have a number of reported tip-overs, people just assume that it means that Jeeps are top-heavy.

This is not entirely the case.

Another misconception that leads to even more confusion is the fact that most Jeep tip-overs happened because of external factors.

This means the Jeep probably hit an object on the road or curb and lost balance, leading to a rollover.

Jeeps are not built for speed because they are made particularly for offroading. 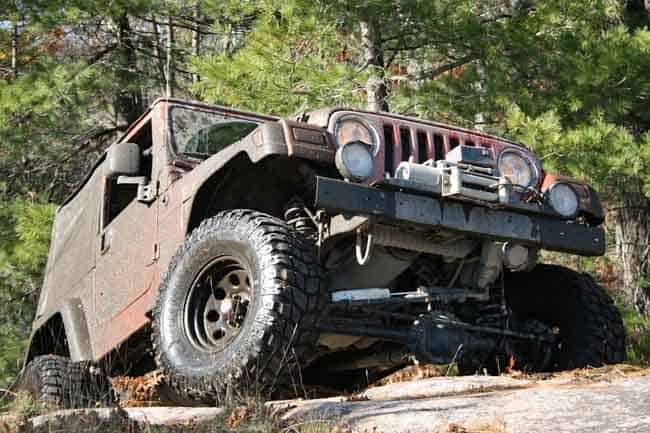 When driving at highway speeds in a Jeep, every bit of caution should be taken. Being alert can keep the Jeep as steady as possible and prevent tip-overs and collisions. This means no sharp turns and no speeding. The Jeep brand has taken tip-overs into consideration because they are prone to happen when offroading.

So in the event that a rollover does happen in a Jeep Wrangler, the Jeep is fitted with roll bars or roll cages. And of course, a well-maintained Jeep should drive exactly like it’s supposed.

Meaning minimal vibrations and less of that wobbly feeling.

How Safe Are Jeeps In Accidents?

Tests conducted by the IIHS and the NHTSA have given the Jeep Wrangler an average rating in terms of safety, compared to other vehicles. Although Jeeps are safe, modern Jeeps are still fitted with extra safety features.

Crash tests conducted by the IIHS proved that Jeeps are relatively safe because of the minimal damage suffered by the test dummy in a controlled test environment.

The test dummies represent the occupants in a car. The same injury points suffered by the dummy, are indications of real injury points a person might suffer. But a controlled testing situation with a dummy isn’t a true indicator of what happens in each and every situation.

All car crashes are different and there are more factors affecting a collision.

Even though all collisions aren’t the same, the tests did show that Jeeps are relatively safe. They are well-equipped when it comes to safety features.

These new safety features include:

Jeep keeps adding improved safety systems with every model that is released. Features such as Hill Start Assist and Hill Descent Control have improved safety ratings for Jeep models.

Jeep Wranglers aren’t particularly safe as family cars because of the limited space. The seats aren’t super comfortable for extra passengers. Most child safety car seats won’t fit through the narrow space to fit into the seats. But when you know you’ll be using the Jeep for offroading, the Jeep Wrangler can be one of the safest 4x4s out there.

Not only has Jeep fitted the latest Wranglers with high strength pillars, but they went ahead and installed stability control as well. This helps drivers correct their steering if they oversteer or understeer the vehicle.

Back in the day, the roll bar or cage would crumple up when involved in a collision. Today, the roll bars and roll cages are stronger and absorb much of the impact of the crash. These are also fitted with extra padding because that can minimize head injuries.

They can also protect the passengers in a collision.

Jeeps have come a long way to improve its safety ratings and bolster confidence in the consumer market. This has shown also in the safety of the fuel tank. The fuel tank was known to be exposed in Jeeps, resulting in more risk of explosion after a collision.
It has since been improved by adding wide-spaced frame rails because that gave added protection to the fuel tank.

So all things considered, Jeeps are in fact safe vehicles. That comes from the fact that Jeeps are often upgraded to add more advanced safety features. This is even though they are typically offroading vehicles.

The weakest point in Jeep Wranglers seems to be the sides. Tests on this weak point of the Wrangler were passed with average ratings. This means side-impact crashes have average protection compared to similar vehicles.

As for the tip-overs, it’s best that a Jeep owner knows the limitations of the vehicle. This includes refraining from speeding and taking caution on highways. The Jeep Wrangler and Renegade might be on the list of cars most likely to roll over. This might be because they were used on normal roads and probably met with an obstruction.

Tip-overs can happen with any car you drive, especially if the vehicle stumbles over a rock or hits an external obstruction such as another car.

The safety upgrades installed are a massive boost for Jeep safety ratings, but at the end of the day, it’s up to the driver to take control of the Jeep. A Jeep is much safer in outdoor rough terrain where other cars aren’t as safe.