People use golf carts for many different activities.  You’ll see them on the golf course, the beach, and even moving through some neighborhoods.

Some may view the low speeds as a bad thing, but one has to remember that these low speeds keep the golf cart from being regulated like a high-speed vehicle would be regulated.

This means you don’t have to worry about seat belts or other safety features that you would need when traveling at speeds above 25 miles per hour.

Another thought to keep in mind is that the maximum speed of a golf cart is determined by many different conditions. 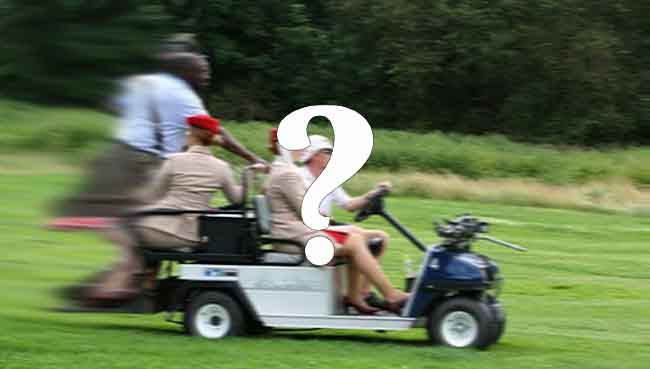 The weight of the golf cart and the size of the engine are two of the biggest contributing factors but aerodynamics and build style can also play a small role in the speed at which a golf cart can travel.

To illustrate this, we’ll give you nine example of golf carts for you to consider.

Let’s start with the actual numbers before we dive into the details.

[su_box]You might be wondering if the faster golf carts are street legal. In that case, you should check out our extensive guide to golf cart rules per state. It will give you ALL the facts.[/su_box]

There is a top that provides overhead cover for the first four passengers and a windshield at the front of the cart.  The back can also convert to a storage area so some additional weight is added there.

Does this mean that electric golf carts are faster than gas golf carts?  Not necessarily.

Also, we have to consider that much of the additional weight of the electric golf cart comes in the form of batteries.

Gasoline has a weight of about 6 pounds per gallon so you will add an additional 36 pounds of fuel to the cart when you first head out for the day.

This golf cart comes with three different power options.  The first two are traditional gas and electric models and the third is an electric model with a high-performance lithium battery.

The RXV is a smaller golf cart with seating for two people.

It has an overhead canopy and a plastic and canvas enclosure that can be wrapped around the sides.  The front has a small windshield.

The interesting part of this example is that the gas RXV has a max speed of only 12 miles per hour.

Both of the RXV electric versions have maximum speeds of 15 miles per hour.

In fact, the gas version is almost two hundred pounds less than the standard electric version so looking at the numbers I would have thought that it would be faster than it.

Another interesting fact is that the standard electric version is much heavier than the lithium version and yet they travel at the same speeds.

It just goes to show that if speed is important to you, it is critical that you rely on the manufacturer’s speed numbers rather than any other factors you may see when buying a new golf cart.

The shuttle 8 comes in a 13.5 HP electronic fuel injection gas engine model as well as a 72-volt electric drivetrain model.  Both versions come with the same size dimensions but the gas version is blue and the electric version is ivory colored.

It is interesting that this large and heavy model can go faster than the smaller RXV model and just as fast as the smaller L6 model.

The $1,000.00 price difference seems to be the trend, so I surmise that this increase has more to do with the additional batteries rather than the actual engine itself.

The cart also has overhead protection as well as a windshield.

Gas versions come with a 13.5 HP motor and the electric version is a 4.4 HP running off of a 48-volt electrical system.  There are six 8-volt deep cycle batteries on the electric cart and one 12 volt battery on the gas one with a 5.96-gallon fuel tank.

Other than the RXV, it seems that the electric versions are often within .5 miles per hour in speed of their gas counterparts.

The UMAX Rally is a two-seater golf cart with a lifted suspension and 23” tires.  There is a full windshield on the front of the cart and an overhead cover for the two passengers.

At the rear, there is a bed for hauling gear and the bumper is set up for towing.

There are brakes on both the front and rear wheels and the frame is made of steel.  The body is made of an automotive-grade polyurethane.

This golf cart has a dry weight of only 457 pounds on both the electric and gas versions.  Its bed can hold 800 pounds and it can tow up to 1,500 pounds.  This makes it a great golf cart for use on a farm, job site, or campsite.

However, 19.5 miles per hour is still an impressive speed considering the cart is lifted and it has very large tires for a golf cart.

Also, it can tow more and haul more than any of the other golf carts we’ve reviewed so far.  This is probably in part due to its strong steel frame and strong engine.

In my opinion, this is a great value for a golf cart with this much functionality and speed.  If you need more seating, you can always go with the UMAX Rally 2 + 2 which provides two additional seats but still offers the same speed and driving capabilities.

This cart is built for the golf course and the rear section is set up to only hold a couple of sets of golf clubs.  The front can hold two passengers and it is covered overhead with a top and in front with a short windshield.

The total vehicle weight for the standard electric version is 975 pounds while the lithium version is only 717 pounds.  The gas version comes at a lightweight 675 pounds.  All three models come with the same AlumiCore frame.

Interestingly enough, all three models have a max speed of 19 miles per hour.

I find this interesting because they all have such different weights and different engines.  It seems that the manufacturer went out of their way to make these carts have the same top speed limits.

I also found it interesting that this golf cart weighed so much.  This cart is small and its frame is built from aluminum so I figured it would be lighter than the Yamaha golf cart we just reviewed.

The Villager 2 LSV is a street legal golf cart built to carry two passengers.  It has an overhead cover, a full windshield, and a small cargo area at the back.

The golf cart also has everything you need to meet the federal street legal requirements for driving a golf cart on a public road.  This includes tail lights, headlights, a horn, and everything else you might need to safely drive your golf cart through town.

This golf cart is an electric golf cart with a 48 volt DC power system.

The engine is a 5 HP engine that can take the golf cart up to speeds of 23 miles per hour.

The total vehicle weight for this golf cart is 1,069 pounds.  The body is made from an impact-resistant ABS plastic and the frame appears to be made from aluminum.

This street-legal electric golf cart markets itself as the golf cart that you can use to pick your friends up with.  The reason for this is that it carries 4 people.  Two seats face forward and two seats face the rear.

The Villager comes standard with an aluminum frame, 3-point seat belts, and a safety-glass windshield with a windshield wiper.  It is a 48-volt engine with 5 HP.

The top speed on this golf cart is also 23 miles per hour and you can go up to 30 miles on a single charge.

This golf cart has a dry weight of 1,129 pounds.  It seems that the addition of two more seats only added less than 100 pounds to the total weight of the cart.  This being said, the total vehicle capacity weight is still only 800 pounds.

The ground clearance is only 4.5 inches but the tires are DOT rated and they come with 7-spoke wheel covers.

This golf cart can carry four forward-facing passengers and it looks more like a small car without doors than it does a golf cart.  The cart has overhead protection as well as a safety windshield and a windshield wiper.

The Polaris has headlights, taillights, and everything else it needs to be street-legal.  Its engine is a 48 Volt AC engine with a motor size of 6.7 HP.

The estimated dry weight of the e4 is 1,350 pounds and it has a payload capacity of 1,150 pounds.  Its tires are 13 inches large and they are street-rated.  There is an option to choose different battery types and sizes depending on what kind of range you want to reach with the golf cart.  You can choose anywhere from a 25-mile range to a 90-mile range.

Regardless of what battery package you decide to go with, you can reach a top speed of 25 miles per hour with this golf cart.

This is the fastest golf cart we’ve reviews on this page and incidentally, it is the golf cart that looks most like a car.

In fact, I’d be surprised to see a golf cart that looks like this on an actual golf course.

You’ll also notice that the website advertises this golf cart as a vehicle that can be used for urban mobility, for shuttles and tours, and for getting around universities.  Interestingly enough, they do not mention the golf course at all.  This being said, the vehicle is certainly a golf cart with a golf cart engine and golf cart functionality.  It also travels at golf cart speeds and within golf cart ranges as well so it can easily be registered as a golf cart or a low-speed vehicle.

The basic MSRP for this golf cart is $14,395.00 which includes a stereo system and a small trunk back that can be used for storage.

How Much Can A Golf Cart Tow?

You might be wondering how much these bad boys can tow. Now we’ve looked at the top speeds and the motor sizes.

Here’s a guide to exactly how much you can expect to tow with a golf cart.

A golf cart typically won’t be sold from the manufacturer at a speed rated above 25 miles per hour.  In fact, many golf carts will never be able to even reach this top speed.

This is especially true if the golf cart is loaded down with three passengers and their gear.

However, this is what makes these vehicles perfect for low-speed roads.  They have just enough power to get you where you need to go without sacrificing your safety.