The typical motorcycle design uses a motor-powered gearbox to power a final drive (usually a chain drive or belt drive) to spin the rear wheel.

The front wheel is generally free-rolling, only powered by the motorcycle’s motion, allowing for a front cushioning suspension and simple front-end steering.

This article answers the question, are there any front-wheel drive or two-wheel drive cars? 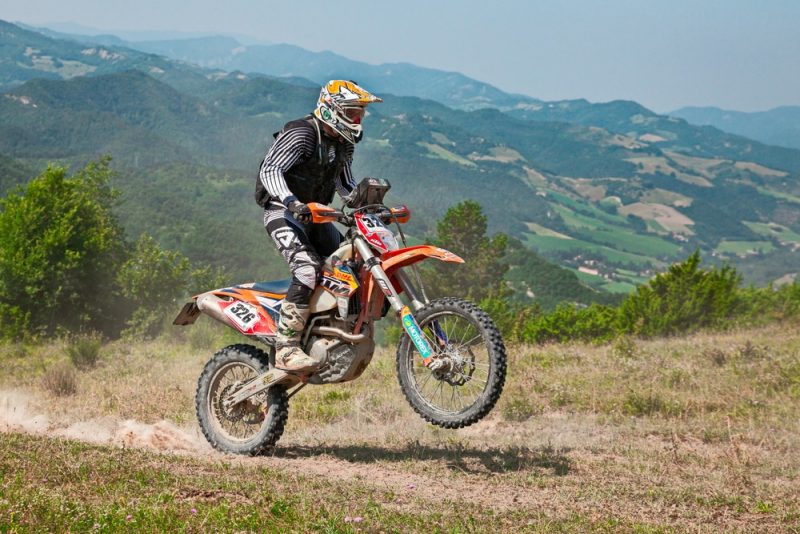 Here’s the Short Answer to Are There Any Front-Wheel Drive or Two-Wheel Drive Motorcycles:

Are There Any Front-Wheel Drive Motorcycles?

There are some front-wheel drive scooters, primarily low-powered commuters or disability vehicles. Front-wheel drive on full-powered motorcycles is ill-suited for a bike, as it impairs physics and traction.

If a full-powered motorcycle had front-wheel drive, it would mean the force of motion is in the front of the bike, pulling rather than pushing. With the final drive routed toward the front tire instead of the rear, the rear loses the weight to the front.

Therefore, when you apply your bike’s brakes, the bike pulls even more toward the front, and the rear suspension releases enough to buck the rider forwards.

And when the rider accelerates, the rear tire would still press not the ground, but with all the motive force pulling from the front, it would only serve to work against the traction rather than for it.

Here’s a consumer report from the owner of a low-powered, front-wheel drive disability scooter explaining how it plays out in real life on Quora:

This is what happened with the scooter. There was so much torque, and so little weight up front, that the scooter just spun the front wheel rather than pull the load of scooter + rider. You couldn’t modulate the power such that you could keep it from spinning out, and once that started, it never regained traction until you stopped the wheel and tried again. It was a design flaw.

The final reason front-wheel drive motorcycles aren’t ordinary is how the front wheel functions on its suspension.

Due to the physics of two-wheel riding at high speeds, the front wheel needs to move up and down on the suspension and move side to side on the fork, in line with the handlebars, for turning.

Furthermore, the front wheel steers the motorcycles by leaning and responding to the rider’s counterweight.

It would also prevent the front wheel from moving up and down in the suspension, effectively interfering with the rider’s control of the bike.

Please also read our article about whether all motorcycles are manual.

Are There Any Two-Wheel Drive Motorcycles?

There have been multiple off-road motorcycles produced over the years. Manufacturing a two-wheel drive motorcycle is problematic on a mass production scale. Still, it can make off-road riding easier by transferring torque and traction between the rear and front tires as needed.

It uses a chain, belt, and shaft drives in the rear and front.

The dirt bike concept uses chains, gears, and shafts to integrate the front wheel into the sprocket, powering the rear.

Dirt bike stocking is an automated pressurized hydraulic accumulator that dampens the bike’s drive system and transfers power to the front wheel until the rear regains traction.

Track bike powered by a lithium battery-charged DC motor in the rear, with an auxiliary electric motor powering the front wheel from its rim.

A dirtbike prototype featuring a hub-center steering system upfront, complete with a swingarm and a chain mounted on both swing axles to transfer power to the front wheel.

A small dirt bike with a unique front fork design integrated into the frame by a second swingarm.

It uses a series of three chains running from the engine shaft to the front power hub to power the front wheel, despite its clutch-driven rear wheel.

Make sure to also read our article about why motorcycles turn when you lean.

Two-Wheel Drive/AWD motorcycles do not perform better on the road due to the front-wheel drivetrain’s added weight and interference with steering, lean angles, and tire traction.

A singular drivetrain adding weight to the bike obliges its natural motion. In contrast, a drivetrain on the front and rear would add resistance to the front wheels lifting action, reducing traction between the tire and the pavement.

That said, the physics are slightly different when riding two-wheels on the road, which is why most of the two-wheel drive motorcycles released over the years have been off-road oriented.

The available traction while riding on a trail is much more limited than street riding.

Although the rear-sinking, front-rising motion still happens under acceleration, the traction in the rear isn’t always solid enough to cover the loss of traction in the front. That’s why dirt biking feels so much squirrellier than street riding at the same speed.

On a dirt bike with AWD, torque can be transferred from the rear to the front mechanically, aiding in the front-end’s control of the bike’s direction and preventing the rear wheel from slipping most dirt bike’s experience.

Still, there is the issue of the front wheel drivetrain’s interference with the wheel’s range of motion, which is why two-weel drive dirtbikes are typically unpopular.

How Come Most Motorcycles Are Rear-Wheel Drive?

Rear-wheel drive motorcycles are heavier in the rear, where weight naturally shifts during acceleration.

Since its rear-centric weight transfer improves rear-wheel traction and reduces front-wheel traction, motion power is best applied to the back, while stopping power is most efficient, favoring the front.

The rear wheel of a motorcycle doesn’t do any steering, whereas the front wheel, fork, and handlebar arrangement are solely responsible for guiding the bike’s direction.

So, while a primary drive in the rear only requires a chain or belt drive connecting it to the bike’s gearbox, a drive train for the front wheel would have to mount to the fork so it couldn’t interfere with the wheel’s range of motion.

That said, the added weight of a front-wheel drivetrain would still interfere with lean physics and shock absorption.

And finally, on a two-wheel vehicle, balance is maintained by force and traction. Wheel slipping happens when the powered rear wheel grabs something loose, like gravel, instead of the stable road, launching the loose object out from under the wheel.

Rear-wheel drive is safer because the momentary loss of traction in the rear is quickly recovered since the motorcycle’s weight shifts to the end under acceleration, allowing the front wheel to maintain the bike’s direction while the rear tire regains its traction.

If the motorcycle were front-wheel driven instead of the rear, wheel slips would happen in the front rather than in the back, causing the rider to lose control of the steering.

We also have an article about reasons a motorcycle’s clutch engages late.