The benefits of owning an electric vehicle are plenty but don’t forget to consider the disadvantages, such as the cost of electric automobile insurance.

In this article, we look into the facts about one of the factors people often overlook when deciding on an electric car: The price of the insurance.

We know electric cars are more expensive and now let’s look at the prices of insurance.

Auto insurance providers consider a number of variables to determine the rate, including:

Another important aspect is the choice of automobile, because owners of powerful sports vehicles frequently engage in unsafe behavior, as they usually drive speedier and more recklessly.

For instance, a sports car will be more expensive than a sedan for insurance, and these fast vehicles are more prone to be stolen.

It is a fact that high-end automobiles are costly to repair and are more susceptible to theft. This makes these cars expensive for insurance due to the higher financial threat they pose to the insurance provider.

On the other hand, electric vehicles (EVs) don’t easily fit into the traditional structure of established automobile classifications. Battery-powered cars are more expensive to insure compared to combustion engine vehicles.

This is mainly because insurers lack the extensive risk evaluation statistics for electric cars that they do for conventional automobiles, which have been present for years, pointed out by Lynne McChristian, the director of risk management and insurance research at the University of Illinois.

According to McChristian, insurance businesses face higher uncertainties than businesses that produce tangible goods because these businesses have a budget for labor and material costs.

But for the insurance company, the monthly premium is effectively determined by a data-driven assessment of the potential losses by the insurance provider.

The average cost of repairs for various brands and models can be calculated using decades of data.

This aids insurance providers in estimating coverage costs. Without this information, insurance firms would have to increase the premium if there is any uncertainty since they are unsure of what the risk would cost.

You can order your Tesla with insurance included as the Tesla company does offer insurance. However, there are many options and the option from Tesla may not be the cheapest alternative.

As previously indicated, prices for electric vehicle insurance coverage are higher than those for traditional vehicles.

The following are the causes of the high insurance premiums for electric vehicles:

When compared to combustion engine cars, battery-powered vehicles are more expensive to buy; even the most affordable electric vehicles in America cost more than $28,000.

Electric vehicles have a high market value, which raises the cost of auto insurance.

Since the initial cost of an electric vehicle is higher, it will eventually save money on gasoline and maintenance costs.

The expensive electric car parts are the main factor in their high price.

The electric car’s battery, which makes up more than 60% of its value, is the most costly of them all.

The potential expense of repairing or restoring EV components is one of the major factors contributing to the high cost of electric automobile insurance.

The price of EV parts is a major concern for automakers as well. The insurance rate might go down if they could lower the price of electric car components.

High-capacity batteries, which are used in electric vehicles, have an expiration date and must be replaced after a specific period of time.

As previously indicated, changing these batteries could cost thousands of dollars.

Because these expenses are covered by comprehensive electric vehicle insurance policies, their rates are on the pricier side.

The average cost of replacing those batteries is more than $8,000. This is due to the fact that the components required to power the batteries are pricey.

Due to their expensive and complicated parts, electric automobiles require a lot of upkeep.

Electric car maintenance and repair require specialized knowledge and abilities that are not possessed by all mechanics. Compared to conventional auto mechanics, there are currently fewer electric vehicle mechanics in different states of the USA.

These characteristics also result in high labor expenses when replacing or repairing electric vehicle parts, which is another element contributing to the pricey electric automobile insurance policies.

The market for electric automobiles is still in its infancy, so component providers are less likely to promote a less competitive market and raise the price of the parts.

Electric cars cost more to fix, and in some situations, they may surpass insured claimed values because the market has not yet developed to make parts widely available, which sharply raises the price.

Also, the different techniques of each car’s charging limit the infrastructure.

How Much Should Electric Vehicle Insurance Cost?

Whereas the cost of insurance for electric automobiles is normally higher than that for gas-powered ones, the analysis of rates for a variety of brands and models is below.

It was done utilizing data from Quadrant Information Services, shows how insurance prices are influenced when a vehicle is electric.

These rates are averages.

The insurance premium for an electric car is determined by a number of distinctive factors.

Who Offers Insurance For Electric Vehicles?

An electric car can be insured in the same way as a conventional car.

The same types of coverage, including collision, liability, injury, and comprehensive coverage, are also available for electric vehicle (EV) policies.

According to the Insurance Information Institute (Triple-I), the majority of national and local insurance companies offer coverage for electric vehicles, including

Getting estimates from many companies is an excellent method to discover affordable auto insurance for an electric automobile.

What Is The Difference Between Gas and Electric Vehicle Insurance?

To determine how much insurance for an electric car would cost in comparison to a gasoline car, experts compared three different electric vehicle models to their gasoline counterparts.

The cost of auto insurance for an EV is approximately 20-30% higher than the price for a similar car with a combustion engine.

The Chevy Spark in electric form was the most competitively priced. The annual insurance rate for an electric Chevy Spark would be $1,190 if it were $1,000 for a gas-powered Chevy Spark.

Because electric vehicles (EVs) are more expensive to purchase, insurance rates for them are often higher.

As a result, the cost of repairing or replacing an electric automobile after an accident would be higher. Electric cars’ pricey, high-capacity batteries are one of the key causes of the price increase.

Why Do Teslas Cost More to Insure Than Other Electric Cars?

The most expensive electric cars to insure are Teslas.

In the analysis of 17 EV models, three of the five EVs with the highest insurance rates were Teslas, especially the most sold models:

In general, the value of the car determines how much it costs to insure; this explains why Tesla rates are higher than other EVs. Teslas’ expensive maintenance and repair expenses are another factor in the high cost of insurance for these cars.

In comparison to other large luxury electric automobiles, the Tesla Model S saw greater claim frequencies and overall losses, according to a 2015 study by the Insurance Institute for Highway Safety (IIHS).

The elevated claim severity was believed to be caused by the battery expense of the car, which is around $16,000. According to Kelley Blue Book, a battery replacement for a combustion engine car costs between $45 and $250.

Teslas have much higher insurance premiums compared to other combustion engine vehicles.

Check out the graph below to see how each Tesla model’s insurance costs stack up against those of similar vehicles. 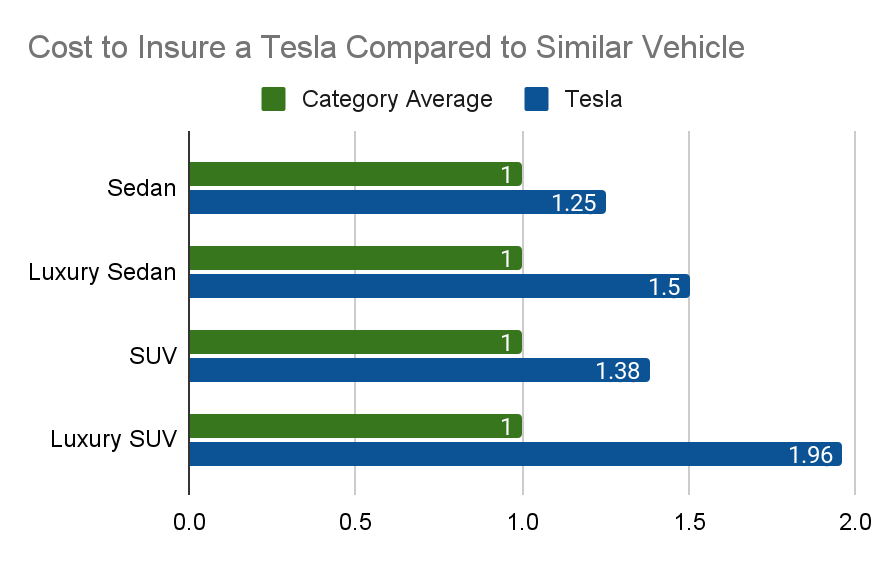 The above graph shows:

However, Tesla offers its own insurance program.

By entering into their Tesla account, active Tesla drivers can receive an online estimate and buy coverage on the Tesla official website.

New customers who order a new Tesla can request a price once the VIN of their vehicle appears in their Tesla account.

Based on telematics data, Tesla’s new insurance program offers drivers discounted premiums in exchange for their safe driving practices in:

It is important to remember that the monthly payment is based on the safety score of the driver.

The premium can rise if the score declines.

How To Cut Costs By Driving An Electric Vehicle?

Having an electric vehicle has financial advantages, despite the fact that its insurance costs are often higher.

For instance, charging an electric car is substantially less expensive than filling it with fuel.

According to one study, the lifetime fuel savings for an electric automobile owner range from $3,000 to $10,500 on average.

A tax incentive of up to $7,500 may be available for your electric car in addition to lower fuel expenses, based on the state you reside in and the number of electric vehicles being sold by the automaker.