If you are buying a Harley, you’ll want to know if they come with a reverse gear.

Harleys are heavy bikes, and trying to move one backward by yourself can be a difficult task.

Do Harleys have a reverse gear?

Reverse gears aren’t exactly popular, and Harley-Davidson sees no reason to incur the extra costs of fitting its bikes with them.

Moreover, the majority of Harley owners are content with the absence of reverse gears. 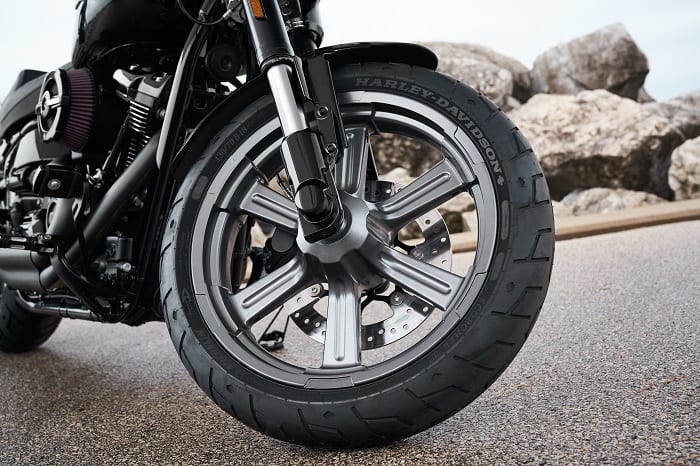 Which Harley Models Have Reverse Gear?

Unlike cars, reverse gears are not popular on motorcycles.

Motorcycles don’t need reverse gears. They have a tight turning radius, so you can quickly turn them around.

Also, most bikes, even the largest ones, are lighter than cars, and riders can back up without a reverse gear.

That said, some motorcycles are extremely heavy, making it near-impossible to move them backward. Consider any of Harley’s popular three-wheeler models as an example.

The Tri-Glide weighs over 1,200 lbs, almost three times the weight of a Street 500 model.

Without reverse gear, moving such a motorcycle will be virtually impossible.

Here are the Harley-Davidson motorcycles that have reverse gear:

If you noticed, both models on the list are three-wheelers. Harley-Davidson’s three-wheeler models are heavy trikes that both weigh over a thousand pounds.

Given their enormous weight, riders need reverse gears to back them up easily.

Have a quick look at our article on Why do Harleys break down so much?

Is It Popular Or Frowned Upon With Reverse Gear On Harleys?

For years, reverse gears were a rare sight on motorcycles.

Things have changed, though, and some newer bikes now offer reverse gears. In particular, heavyweight cruisers like the Honda Goldwing now come with reverse gear.

If other motorcycle companies are using reverse gears, why isn’t Harley-Davidson putting them on many of its bikes?

The answer is simple. Most of the Harley community don’t like reverse gears on their motorcycles. According to them, reverse gears are unnecessary equipment, just like an automatic transmission. And they are right to some extent.

Mostly, you don’t need reverse gears on your motorcycle. Unless you live in a hilly region, you won’t need a reverse gear mechanism to back up your bike.

Bikes are lightweight and are easy to move backward on flat ground. Reverse gear on your Harleys will only increase its price and weight and decrease fuel economy.

Nonetheless, some Harley owners would love to see reverse gears on Harleys. According to this group of riders, Harleys are some of the heaviest bikes on the market.

As such, they find it hard to back up their motorcycles, especially when parking.

For these groups, a reverse gear system would make it easier to turn their bikes.

Kindly read our article on Do Harleys Need to Warm Up?

How Hard Is It To Turn A Harley-Davidson Without Reverse Gear?

Undoubtedly, Harley-Davidson motorcycles are some of the heaviest on the market.

Only a few bikes like Honda’s Goldwing are heavier than Harleys (excluding three-wheelers). Consequently, the enormous weight makes it hard for riders to turn their motorcycles backward.

If you have a heavyset build, turning a Harley-Davidson bike shouldn’t be hard. But if you have an average physique, it can be hard to turn a Harley without a reverse gear.

Smaller models like the Street 500/750 and the Sportster are lighter and nimbler, making them easier to turn backward. Those big Harley touring models? Don’t try turning them by yourself if you don’t have the strength.

Sure, the average adult rider shouldn’t have difficulties while turning a heavy Harley cruiser. But there are cases where even brute force won’t be enough to turn your Harley.

In such cases, your bike has less traction, and you’d have difficulty turning it. And you may need to enlist other individuals’ help to push/pull the bike into position.

Other situations where you may have difficulties turning your Harley include:

Can You Install Reverse Gear On A Harley-Davidson?

There are ways you can add a reverse gear to your Harley bike.

Here are some tips for you:

1. Get Your Dealership to Install a Reverse Gear for You

Some Harley Davidson dealerships offer modifications as part of their sales packages.

You may find one willing to install an aftermarket reverse gear on your Harley. Having dealership techs install the reverse gear has many benefits.

First, you may get the modification done at a lower price than what other shops would charge.

Also, you’d have the opportunity for after-sales service if the system doesn’t work as it should.

You could instead buy the reverse gear kit yourself and get it installed at an indie mod shop. Many companies produce reverse gears for Harley-Davidson motorcycles.

You can find many of the best aftermarket reverse gear kits for Harleys online and at indie shops.

Below are some of the best aftermarket reverse gear kits for Harley-Davidson motorcycles:

Produced by Suspension Technologies USA, the Yelvington MRP is one of the best reverse gear systems on the market.

It costs around $1,900 plus shipping and is one of the most affordable Harley Davidson reverse gear kits.

Moreover, it’s quite easy to install and use on your Harley. You don’t need to modify your engine or gearbox or any other component for that matter.

We’d advise you to buy the Yelvington MRP if you’re looking for a cheap way to get reverse gear on your Harley.

The Yelvington MRP is only compatible with models made in 2009 or later.

This reverse gear kit is mostly used on trikes but also works for two-wheeled motorcycles.

The manufacturer doesn’t have a US distributor yet, but you can order it on Amazon or the company’s site.

Nevertheless, we like the Zodiac kit because of its compatibility with many new and old Big Twin and Twin Cam touring models.

Even models made as far back as 1987 can use the Zodiac Reverse Kit.

Baker Drivetrain has been an industry leader in reverse gear systems for Harleys. Its newest F6R reverse kit works on 2009-later models, although it has systems for older models too.

The F6R package costs $2,195, making it one of the most expensive reverse gear kits on the market. The F6R kit is worth the price tag, given its many unique features.

It’s effortless to install and requires no extensive modifications for it to function. The kit is easy to use also, requiring a press of the handlebar switch and kick off the shift lever to move into reverse.

It would be best if you were careful when installing reverse gear mods on your Harley. Your dealership may void the warranty on your power train if it discovers that you modified it to accommodate a reverse gear kit.

What Other Motorcycle Models Have Reverse Gear?

As we explained earlier, reverse gears are not standard on motorcycles.

Presently, only a handful of bikes have reverse gear functionality. Even this is limited to the heavy bikes that are difficult to move back without a gear mechanism.

Honda Motor Co. has put reverse gears on its heaviest bikes for years. Models such as the discontinued GL1500 Goldwing and the newer GL1800 Goldwing models have reverse gear systems.

Another motorcycle that features reverse gears is the Can-Am Spyder. It is a three-wheeled model with a dry weight of over a thousand pounds.

With this, the addition of reverse gears makes sense.

Other motorcycle companies that have or still use reverse gears on their bikes include Ural and Moto Guzzi.