The radio may not be a piece of necessary equipment if you’ll only be completing short journeys on your Harley.

However, you will likely want some radio music while doing long-distance touring.

Do Harleys have radios?

Yes, Harleys do come with motorcycle stereo systems that have both radio and CD player functionality. However, the radio feature is limited to the high-end touring models such as the Street Glide, Ultra Glide, and the Tri-Glide.

With other Harleys, you’ll need to install an aftermarket system to enjoy the radio. 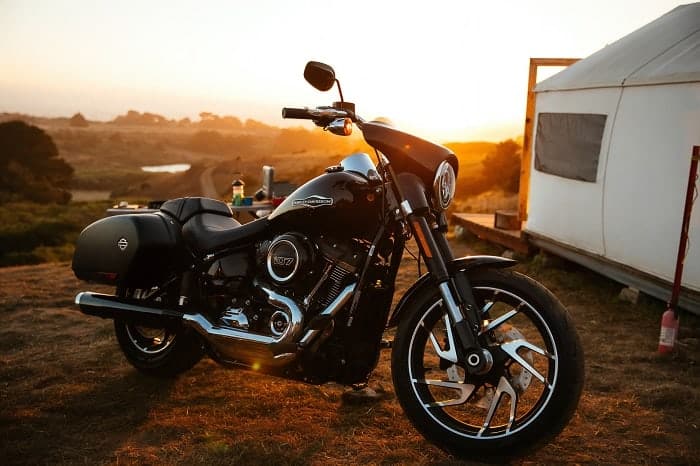 What Harleys Have Radios?

As we said before, not all Harley models come with CD radio players.

Radios are not as conventional on motorcycles as they are on cars. Bikes have little protection from road wind, which often affects riders’ ability to hear radio sounds while traveling.

As a result, most motorcycle companies [Harley inclusive] rarely put radios on their bikes.

The only Harleys that come with factory-fitted radios are the heavyweight touring models. Designed for riders who love cross-country rides, these models have fairings that protect the rider from road wind.

With the presence of a fairing, the wind cannot affect sound quality, which is why you see radio systems on them.

Touring bike riders travel for miles at a stretch and may love to play their favorite tunes to make journeys more fun. Because of this, most of the touring models have some stock stereo radio system.

The infotainment system allows you to listen to your favorite stations and comes with navigation and music streaming functionality.

Here are the Harley-Davidson models that come with factory-fitted radio/stereo systems:

Can I Add A Radio To My Harley-Davidson Motorcycle?

Maybe you have a Harley that doesn’t come with a radio, or you want to replace the stock radio on your Harley.

Whichever of these categories you fall under, here are some things you can do to equip your H-D motorcycle with a radio:

1. Install a Harley-Davidson Radio Kit on Your Bike

Harley’s Boom! Box GTS Infotainment System [which comes with radio capability] is unfortunately not standard on all Harleys.

If you own such a model, you can buy H-D’s OEM Infotainment system and have it installed on your bike. However, you cannot do this on models like the Softtail or Sportster as they are not designed to have radio/infotainment systems on them.

The Electra Glide has enough dashboard space for either a simple stereo system or infotainment setup.

You should consider your options carefully, though. Getting either the Boom! Box GTS 4.3 or the Boom! Box GTS 6.5 is often an expensive affair. If we calculate the procurement costs and installation fees, you may spend up to $2500.

Nevertheless, H-D’s infotainment system can be a good buy, especially with added features such as GPS and waterproof speakers.

2. Get an Aftermarket Radio System

Maybe you don’t like the stock radio that came with your Harley.

Or your model is a Sportster [or another non-touring model] that doesn’t come with a radio/infotainment system. Many aftermarket stereo radio kits offer the same benefits as Harley’s HK system at a lesser cost.

Moreover, you cannot get Harley’s infotainment system installed on your non-touring model because of the smaller dash. Therefore, only an aftermarket mounted radio setup will do. These radio kits are usually installed diagonally across the handlebars.

Some of the best aftermarket radio kits for Harley motorcycles include:

Do Older Harleys Have Radios?

Radios are not a popular feature on Harley motorcycles.

Harley-Davidson only started fitting its bikes with radio kits in 2003. The Boom! Box GTS Infotainment system also came later in 2013.

This means all the Harleys manufactured before 2003 had no radio system of sorts.

If you have a pre-2003 model [probably a classic], you can easily get an aftermarket radio installed/mounted on your bike. Mechanics can retrofit a radio kit on your old Harley if you are ready to pay the price.

You can even do the retrofitting at a Harley-Davidson dealership, provided they offer such services.

However, consider the cost of adding a radio or infotainment system to your classic Harley.

Retrofitting your Harley with a Harmon-Kardon radio kit is expensive, as mechanics have to modify your bike’s wiring to accommodate the equipment.

You can buy a more affordable aftermarket alternative to save money.

What Are The Best Speakers For A Harley?

Those long-distance rides don’t have to be boring activities.

With motorcycle speakers, you can turn your Harley into a moving entertainment system and bop to classic tunes as you ride.

Listening to radio via speakers is better than using earphones as the latter reduces your focus on riding.

However, if your Harley doesn’t have a speaker or the stock speakers are low-quality, here are some options for you:

As the name suggests, handlebar speakers are designed to be mounted on the handlebars of a motorcycle.

They do this through clamps that can be bolted or fastened on the bars. The good ones usually have durable [and waterproof] designs and are suitable for extreme weather.

Some even come with additional amplifiers that improve the audio quality of your tracks.

Best handlebar speakers for Harleys include:

If this is the case for you, we’d recommend you buy any of the following speakers so you can enjoy your tunes better:

Does It Make Sense With A Radio On A Noisy Harley?

Some believe that getting a radio kit on a Harley is useless, given that the loud exhausts can easily drown out the radio’s sounds.

Although this is correct to an extent, it shouldn’t stop you from using the radio on your Harley. If your H-D radio has an additional input port, you can plug in your earphones and listen to your music.

That way, you don’t need to disturb everyone else with your radio.

However, we wouldn’t advise using earbuds or headphones while riding, as doing so could be dangerous. When you’re listening to the radio with headphones or earbuds, you become less aware of your surroundings.

As a result, your chances of getting involved in a crash increase.

Some owners often get speakers or amplifiers so they can hear the radio clearly on long rides. Speakers/amplifiers aren’t bad as they allow you to enjoy your favorite tunes and still focus on riding.

The problem is blaring radio tunes via speakers on your Harley can be considered an insensitive thing to do. It’s even worse when your Harley’s noise level is already above the legal limit.

Of course, you’re free to turn up your radio’s volume to the highest when tearing down the highway.

It transforms those long rides into fun and enjoyable experiences.

Blaring sounds from your radio while sitting in evening stop-and-go traffic? Now, that doesn’t make any sense at all. You’ll be inconveniencing other road users and denying them the right to enjoy their daily commute in peace.

Harley owners already get so much criticism for the loudness of their motorcycles. Further disturbing people with your loud radio will reinforce the notion that Harley owners are insensitive people.

If you really want to rock to your best songs while riding, do it on the highway, where you can enjoy your tunes without disturbing others.