Back in the heydays of AM/FM radios, cars had long rods to capture radio signals. These were seen in almost every car because radios were the primary entertainment in the car.

Locations of this old type of antenna ranged from the rear side of the car and other cars had theirs on the front. The location of the antenna was important in order to capture as much of the radio signal as possible.

Nowadays, automakers have done away with those long antennas in their designs. Sometimes you can’t even see the antenna even though it is there for receiving radio signals into the car.

Antennas are now improved into a shark fin type antenna that is smaller and can be seen in most modern cars. This design is unintrusive and allows the antenna to be part of the car’s overall exterior design.

With that said, in this article, we are taking a look at some popular cars without visible antennas. These are common cars that either have the shark fin type antenna or a completely hidden one that is out of sight.

The Volvo XC90 is a premium SUV from Volvo and gets itself a shark fin-type antenna for radio signals. The antenna is situated at the back of the car and integrates nicely with the overall exterior design.

Volvo has always been known to produce some of the safest cars in the industry. This is no different from the XC90 which has a variety of safety techs.

This mid-size luxury SUV is a marvel to drive due to its plug-in hybrid powertrain producing 455 horsepower. You also have the option to go for the four-cylinder engine, which should give better acceleration.

Through the various trim models of the XC90, you get standard built-in navigation but without the compass in the rearview mirror.

Higher and premium trims of this SUV also get a 360-degree camera system and an air purification system. This is along with a climate package with a heated steering wheel and rear seats.

When it comes to fuel economy ratings, you can expect to get 21 mpg for city driving and 30 mpg for highway driving.

This is on par with other competitors in the same segment, such as the BMW X5.

A tablet-style 9.0-inch touchscreen display can be found in the center area of the interior. This controls media and other components in the car.

The radio is supported by a shark fin-style antenna situated on the rear top of the car. Due to the position of the antenna, there is a good signal reception.

It’s no secret that the Mini Cooper is one of the most recognized cars in the auto industry. The Mini Clubman has a shark fin-type antenna that is situated on the rear part of the car’s roof.

This is a great position for the antenna because it is not obstructed by the car’s exterior design. An antenna like this also fits in very nicely with the overall design of the car.

Trunk doors that open vertically are known to block some of the signals when an antenna is located at the rear. This is because an external antenna needs a clear path for receiving radio signals.

Because the trunk doors of the Mini Clubman open horizontally, they have limited obstruction to the antenna.

This design was mostly by chance and not with the antenna of the car in mind.

However, this has proven to be a great design in part for the Clubman’s antenna reception. In this case, the signal will always be clear regardless of whether the trunk door is open or not.

It is quite easy to recognize the Mini Clubman due to its iconic look from decades ago. With that said, this Mini Cooper is a long way from the old models due to significant upgrades.

Looking at the Clubman, you can immediately tell that it is a lot longer and bigger in design than smaller base models. It also gets bigger 17-inch wheels with flat-run tires and a lot more features both for safety and comfort.

The interior is quite comfortable, especially for longer trips to make it that much more convenient for passengers. It’s got front heated seats, dual-zone air conditioning, and a push-button start ignition for the engine.

There’s nothing mini about the Mini Clubman’s performance which gets a turbocharged 2.0-liter four-cylinder engine. This gets a power up to 189 horsepower with a seven-speed dual-clutch automatic transmission.

Various trims of the Clubman can get you from 0 to 60 mph in 6.6 seconds. On the side of the spectrum, you get about 7.3 seconds for the all-wheel drive version.

For fuel efficiency, the Clubman is not bad at 25 mpg for city driving and 35 mpg for highway driving. This puts it on par with some of the best cars in the same segment.

For such a small-looking vehicle, you’d expect a really small and cluttered interior. Fortunately, this is not the case with the Mini Clubman.

With premium materials, the interior looks rather well designed and quite roomy. It is not only spacious for passengers but also for cargo, with its 33 cubic feet of space.

The sound system has 6 speakers with AM/FM radio that is standard across all trims of the Clubman. All models also come with Bluetooth connectivity and support Apple CarPlay but no Android Auto capability.

For Android-based smartphone users, this is a huge setback because their phones will not be able to sync with the car. In this case, users of Android will have to find a workaround that enables Android support.

Along with exceptional looks and comfort, the Clubman also gets a variety of safety features across the trim levels.

With the location of the antenna right at the rear of the car, it is bound to have an exceptional signal reception for the AM/FM radio.

This will come in really handy for those long-distance trips with the Mini Cooper Clubman.

It is easy to tell why automakers are now opting for shark fin-type antennas on new cars. Not only are they cheap to manufacture, but they are long-lasting and easy to install and repair.

Other than old rod-style antennas and fin-type antennas, we also have types that are completely out of sight. These are integrated into the rear windshield and are often installed on premium-level cars.

With that said, let’s move to our next car without a visible antenna.

Related: Are Longer Car Antennas Better Than Short Ones? (Explained) 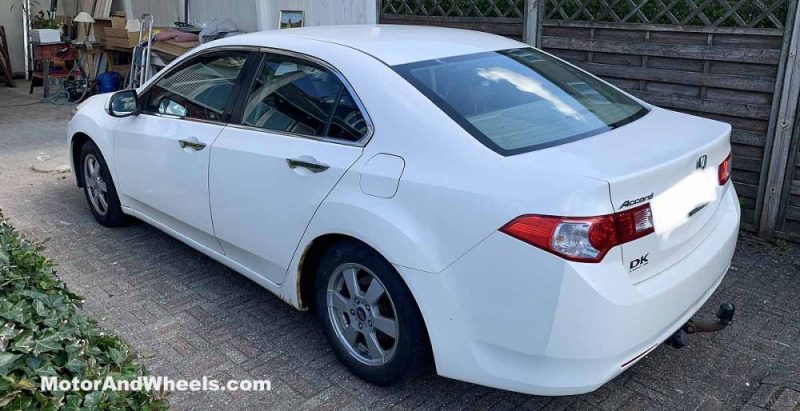 The Honda Accord is one of the best family-size sedans on the market, going up against competitors such as the Toyota Camry and Hyundai Sonata. The 2007 Honda Accord and 6th gen models had an antenna that doubled as rear defrost.

The rear windshield, where the defrosting panel is, also worked as an antenna for AM/FM radio signals. This is an innovative way to hide the protruding rod antenna in other cars.

Windshield antennas also mean that the antenna is not obstructing and changing the design of the car. Another benefit is that they are more reliable in receiving broadcast signals for radio because of longer wires.

Because of its large interior cabin, the Accord is great for long-distance family trips. This is why a good radio with great reception is a must.

The 2007 model did not have much going for it in terms of entertainment we get in modern cars. There is no infotainment system with a digital display, but the buttons work just as well.

With that said, the Honda Accord makes up for some shortfalls with great handling, safety, and fuel efficiency.

As a well-known and loved family sedan, safety was really important for Honda in the Accord’s design. It comes with a list of standard safety techs such as automatic emergency braking and cruise control.

Modern versions of the Accord were able to keep up with safety technology demands throughout the years. This includes lane-keeping assist, blind-spot monitoring, rear cross-traffic alert, and parking sensors.

Unfortunately, Honda still makes the Accord in various trim levels that don’t necessarily have all the bells and whistles. This means that to get more features, buyers will need to pay extra for premium features.