The Yamaha XV 1600 was among Yamaha’s initial cruiser models offered to American buyers. Aimed at reducing the dominance of market leader Harley-Davidson, these Japanese-made cruisers offered plenty of technological features at low prices.

Today, the XV1600 remains a superb cruiser model that can haul you over long distances with minimal stress.

However, like every other motorcycle, the XV1600 has a few problems that mar its reliability. We will evaluate these common problems in this article and where possible, offer solutions. 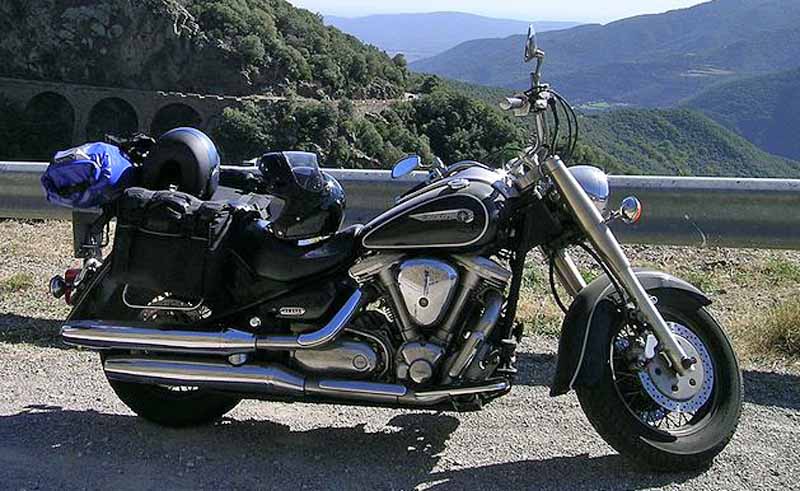 Because of the air-cooled engine design, the Yamaha XV1600 is susceptible to emitting several noises. Unlike their liquid-cooled counterparts, air-cooled engines do not have a water-filled jacket that dampens engine noise.

As such, it is inevitable that users experience some weird noises while either idling or riding.

But not all the noises on these bikes are normal. Some are actually signs that something is out of place or in need of replacement. Here are some of them:

i. Ticking noise from the cylinder head area

The air-cooled nature of the cylinder heads means some ticking is inevitable, especially as engine temperature increases and parts start expanding.

However, hearing a ticking noise when the engine isn’t hot may point to improper valve clearance adjustment.

Each cylinder in the engine has two intake valves and two exhaust valves. The opening and closing of both series of valves are controlled by a single rocker. This rocker has two parts: an adjustable part and a non-adjustable part. If the adjustable part isn’t adjusted properly, the valve contact point won’t be the same as the other part. This will eventually lead to the loud ticking noise heard during rides.

It is normal for you to hear a tapping sound from the camshaft area while the bike warms up. This noise should subside as the bike reaches operating temperatures. If the tapping noises doesn’t reduce, it may be a sign of a failed lifter.

To solve this problem, you will need to replace the faulty lifter.

At low speeds, you may hear a somewhat subdued knocking noise from the crankshaft area. This noise is due to the XV1600’s engine design and is normal. But if this noise persists irrespective of engine temperature or load, it may be a sign of imminent bearing failure. In severe cases, maybe the bearing has failed totally.

The best way to diagnose this problem is to inspect the bearings. But before you jump to conclusions about the state of the bearings, know that bearing failures can deteriorate in a relatively short period.

If the noise disappears often, then the noises are merely a result of the engine’s operation.

Some early XV1600s had trouble with the transmission system, especially those released between 1999 to 2003. The most prevalent of these issues is a defect that causes abnormal wear on the transmission. If this happens, the circlip may break and come loose, which would cause the transmission to lock up.

This problem is quite serious, as the rear wheel may seize, increasing the rider’s chances of crashing.

Yamaha issued a recall for this problem, instructing dealers to make necessary modifications to the transmission. If your bike isn’t covered, then the best thing is to have a technician carry out the modifications. This can be expensive, since the technician has to disassemble the engine for the repairs.

3. Suspension May Bottom Out

When the suspension on a motorcycle bottoms out, the shock has no travel left. Bottoming out often causes banging or clunking in the wheel area. Here is a guide to fixing this problem on XV1600 models:

Inspect the preload on the motorcycle shock/spring. Because of the weakness of the stock springs, the damper may fail, leading to the bike bottoming out.
Inspect the mounts where the shock connects to the frame. These mounts may suffer damage from insufficient preload or a bad damper. The damage may worsen over time and cause the mounts to break at the frame. If this happens, the bike may bottom out.

To solve this problem, you could weld the broken mounts. Alternatively, you can buy a stronger aftermarket shock/spring.

Some owners have complained that the handlebars on their bikes tend to wobble at high speeds. Some also say the front end of the XV1600 feels loose while making turns.

While this isn’t particularly serious, they can make the rider uncomfortable. The most common cause of this problem is loose bearings. Examine the condition of the motorcycle’s bearings; if they are bad, replace them.

If they are in good condition, ask a technician to inspect your bike.

Before we delve into the problem, let’s understand how an oil pump works. The oil pump has two gears (inner and outer). When the two gears rotate, the intake area separates and creates a vacuum between the gears. This vacuum sucks oil, which is later transferred to the discharge area through gear motion.

Afterward, the gears connect (on the discharge side) to squeeze the oil out.

The problem with the oil pump gears on the XV1600 is that they are weak and can break.

This can lead to failure of the oil pump on the motorcycle. Signs of oil pump failure include:

a. Low oil pressure: The oil pump maintains optimal oil pressure levels in the engine. It uses pressure to circulate oil that a) keeps engine parts greased b) prevents friction. If the oil pump fails, the oil pressure (and the flow of oil) in the engine will decrease. This will lead to a reduction in power and frequent stalling. It may even lead to extensive engine damage or failure.

b. Higher engine temperature: As said earlier, oil helps reduce friction among the engine’s components. Once the oil pump fails, friction will increase and so will the heat in the engine.

This will lead to a spike in the engine temperature.

c. Noisy hydraulic lifters: The hydraulic lifters in your engine require constant lubrication to function properly and noiselessly. Reduced oil supply (occasioned by the failed oil pump) will increase the noise and rate of wear on the lifters.

b. Noise in the valve train and oil pump: The valve train houses key engine parts e.g. pushrods, valve guides, and seals. Like the hydraulic lifters, these parts need constant lubrication or else they can’t operate quietly.

NB: Yamaha issued a recall for the affected bikes and replaced the weak oil pump with a stronger variant. If your bike isn’t covered, the best thing you can do is to buy an aftermarket heavy-duty oil pump.

General Pros and Cons of the Yamaha XV1600

Here are pros and cons of the Yamaha XV1600:

Here are some of Yamaha XV1600’s selling points:

1. Powerful Performance: If a powerful cruiser is what you want, the XV1600 is perfect. The model’s enormous 1602cc V-twin engine produces a whopping 134.3nm of torque at just 2250 RPM. With such low-end torque, you don’t have to rev high to accelerate while cruising.

Other performance-enhancing features on the XV1600 include:

For example, the model comes with an ergonomic cockpit layout along with back-swept handlebars made for easy gripping.

It also comes with floating floorboards for more comfortable touring.

3. Sharp Brakes: Every rider knows the importance of having good brakes on a motorcycle. Often, the performance of the brakes may be the difference between life and death.

4. High-Quality Finish: For those who like attractive-looking bikes, the XV1600 is a good choice. The models feature gleaming, chromed bodywork, classic-styled fenders, and blacked-out engines.

Regardless of where you go, the XV1600 is the kind of bike that turns heads.

Here are some weaknesses of the XV1600:

“The cockpit layout is relaxed and comfortable, with wide handlebars on rubber mountings, and floating floorboards. Handling is stable, thanks to a rigid, double-cradle frame, brushed-steel fork and quality Bilstein shock…

The Roadstar (XV1600) is a machine to embody the concept of excessive power, torque and stature, and bombard you with the joy of motorcycling.”
Source: Totalmotorcycle.com

What’s The Resale Value On the Yamaha XV1600?