We know the feeling of waking up early and hitting the street at sunrise when the air is cool, and the town is empty.

After a little warm-up rip, you stop for gas and a refresh of coffee. You get back to your bike after the quick gulp, and her pipes are still hot—nothing happens.

This morning it started just fine; why won’t your motorcycle start after a long ride?

We’ve listed the 9 most common reasons bikes have trouble starting after long rides, along with a few tips on how to get back on the road! 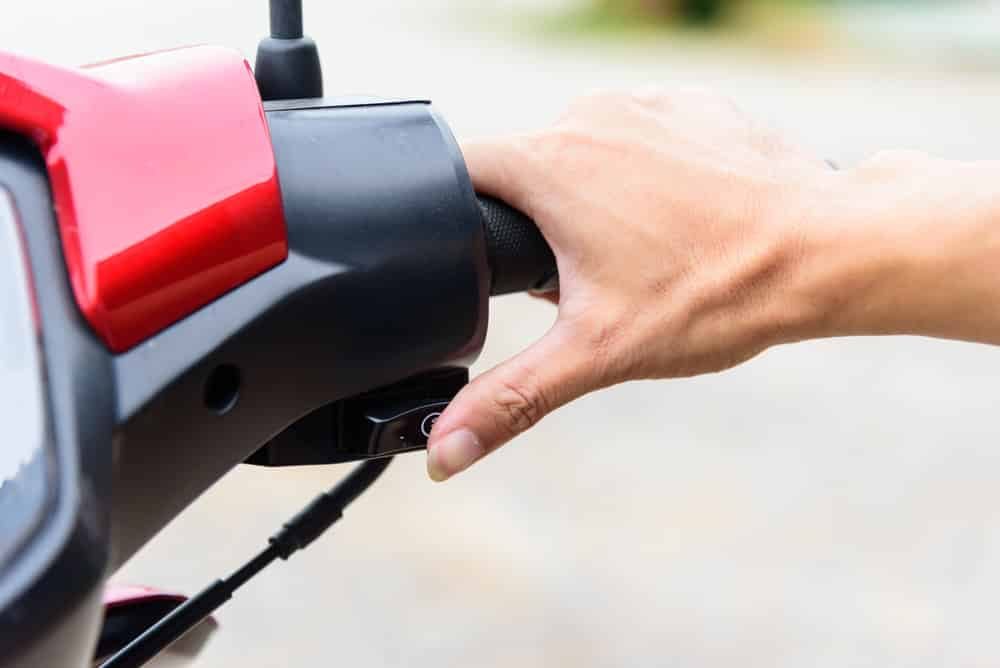 Like most of the hidden hero components that help your bike fire up, your motorcycle’s ignition coil wears over time.

Once worn, the coil can become temperamental, especially in hot environments, whether due to the general climate or heat generated by a long motorcycle ride.

If your motorcycle doesn’t start after a long ride, check the temperature on your ignition coil. It could be the culprit if it’s too hot to touch your finger for more than a few seconds.

A bad ignition coil might transfer power just fine, allowing the bike to start when the engine is cold. But the heat generated during a long ride moves by conduction from the engine to heat the worn coil and weaken it.

The hot coil had then built up too much resistance by accumulating heat during your ride until it was too hot to start the motorcycle.

The heat accumulated during your long ride may also have been enough to damage the coil’s windings.

It could be that your ignition coil was fine when you started off this morning, but the heat generated during your long motorcycle ride was enough the fry the already worn coil.

You can know for sure if your coil is the problem by testing it with a voltmeter. Fortunately, an ignition coil replacement is a straightforward fix for any decent motorcycle tech.

If you are on a vintage motorcycle that started fine cold but won’t start after a lengthy ride, your slipper spring could be grounding out your motorcycle’s points.

If your slipper spring is worn out, it may have expanded from the engine heat conducted during your long motorcycle ride.

As the spring arches between the points and a nearby screw or piece of hardware, the arching grounds the points out before they have a chance at energizing the plug.

There are a few DIY fixes you can pull on the fly to get back on the road if grounded-out points are the reason your bike won’t start after riding. That said, we suggest replacing the worn slipper spring and being done with it.

Your CDI box, or Capacitor Discharge Ignition, is essentially a battery with its potential to store and release energy.

Though it sometimes takes the form of a TCI system, the CDI is usually integrated into your ignition circuit and is an ally in the case of a surge or abnormal electrical functioning.

If your CDI box is bad, its performance may buckle after it explodes to the heat generated by a long bike ride. A bad CDI accumulates resistance when exposed to high temps; regardless of how well your bike started at the beginning of the day, the box might begin to fail after a few hours of riding.

That said, CDI boxes usually withstand higher heat than most of your electrical system, as their function includes damage control unless they’re late in their life.

Therefore, we suggest troubleshooting some of the other components on the list that are a little more vulnerable unless your bike is exhibiting some of these other symptoms:

Your bike started up just fine when it was cold, but if your spark plug wire loosened or frayed during your long ride, your motorcycle won’t start.

If you’re lucky, it might be as simple as your spark plug boot popping off, as the fix is as easy as slipping the black rubber boot back over the spark plug.

If a spark plug wire split or cracked during your long ride, however, likely under the stress of the engine heat, your motorcycle won’t start back up until you’ve replaced the damaged wires.

While a bad spark plug will crank but not start, a worn but not quite dead spark plug might fire up when the bike’s cold, only to fail after a long ride once that dreaded engine heat builds up.

If a bad spark plug is your issue, your bike may have started before your long ride. Still, you likely noticed some erratic engine activity during the ride, as a worn plug causes inconsistent ignition before it fails completely.

Another possible scenario is that the heat from your long motorcycle ride cracked the worn spark plug. After the intended ride, the crack in your plug became the path of least resistance.

During ignition, the spark exits the plug and grounds out via the engine block, rather than traversing the spark plug gap and starting your motorcycle.

Related: 10 Reasons A Motorcycle Won’t Start Even If Battery Is OK (Solved)

Your motorcycle can fail to start after a long ride if its valve clearance is less than the amount specified in the owner’s manual. The metal valves are fabricated to expand during operation. The spec clearance considers this, suggesting an amount of valve space that can function while cold and after the bike has been ridden for hours on end.

That said, if your valves are marginally off at the start of your day, the expansion that takes place during your long ride makes the clearance even tighter.

If your long ride causes enough heat to expand your valve to where it holds itself open, you’ll lose engine compression, and after your ride, your bike won’t start until it has a chance to cool down.

Valve adjustment varies from moto to moto and must be done with feeler gauges and the particular specifications outlined in the service manual for your year model motorcycle.

If you don’t have the proper tools, manuals, and training, this might be a job for your local motorcycle mechanic.

A weak motorcycle battery may have had enough of a charge to start the bike when it was cold out this morning, but these days a bike stator takes about 15 minutes to charge a low battery to full while riding.

When was the last time you rode your bike before your long motorcycle ride?

If the bike was sitting for an extended time before your motorcycle ride, the inactivity would reduce its charge capacity. If sitting untendered drained its capacity, it might not have been charging while you were riding. It may have had enough voltage to start the bike initially, but that may have been the last of its life.

Another possibility is what we call a “parasitic drain.”

These days, most motos use an ECU or a CPU of some sort to govern and regulate the bike’s dynamic operation sequences into a unified functionality.

These computer units sap a small amount of energy from the battery while the bike is charging to stop them from going dead. If you have aftermarket accessories hooked up to the CPU, this slow parasitic drain is increased, sometimes enough to kill the bike’s battery.

Finally, you could have corrosion on your battery terminals or grounding wires. Faulty battery wiring can not only stop the battery from charging; in some cases, it can cause a power leaching, depending on the details of your problem.

And finally, eventually, even the most dependable motorcycle batteries expire, reducing in capacity before finally crapping out. Your bike’s battery could have had enough residual juice to start up the bike before you’re long riding, but that may have been its swan song.

If your motorcycle’s stator is already worn, the heat generated from a significant motorcycle ride could be enough to fry it.

Your stator is the component responsible for recharging your motorcycle battery.

Therefore, if your stator overheats and burns out during your ride, your motorcycle battery won’t have a chance to recharge. So, when you stop for gas and go to fire her back up, nothing will happen.

A crack in your stator’s surface may have been too insignificant to prevent your bike from starting this morning.

However, once the engine’s heat generated by your lengthy ride reaches high temperatures, the stator’s metal expands, frying your bike stator.

This section is especially relevant if you’re on a motorcycle with an electrical starter, which has been the vast majority of bikes for at least the past 30 years.

A faulty starter will still fire up from time to time, especially in temperate conditions. In hot weather, or after long rides that accumulate engine heat, a faulty starter may heat up enough to build resistance.

If you hit that kill switch after a few hours of riding, you might come back to a starter that won’t have received the charge required to start your bike.

The motor heat customary during long rides can split the wires in your starter, especially if they’re already worn.

If the starter is indeed the reason, your bike won’t start after long rides. Replacing the whole unit is the most foolproof course to get you back on the road.