The Honda Interceptor refers to a series of Honda motorcycles in production since 1982.

The Interceptor line ranges from naked bikes to sportbikes to some hard-bagged sport-tourers.

All Interceptors save for the smallest use an iteration of the reliable V4 motorcycle engine Honda came to be known for since the 80s, but just how long does a Honda Interceptor last? Let’s find out. 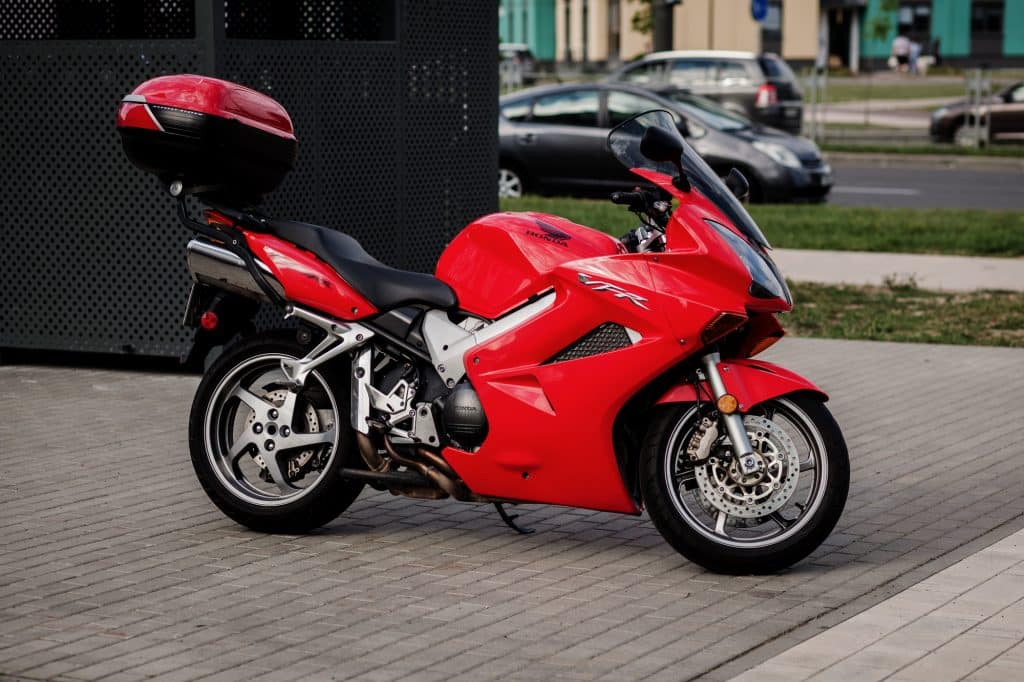 Here’s the Short Answer to How Long a Honda Interceptor Lasts:

How Many Miles Do You Get on a Honda Interceptor?

While a well-kept Honda Interceptor can last for upwards of 80,000 miles, well over 100k in some cases, the longevity of an Interceptor depends on responsible ownership.

I’ve seen consumer reports published online that indicate odometer readings of over 500,000 miles on an 800cc Interceptor in Europe. The owner claimed they’d never even had to rebuild the engine.

The Interceptor came from the era when Honda figured out they could build sealed, Four-Valve bike motors with liquid cooling, just like a car. This is a practice still common at the Honda factory; there are still at least two Interceptor models in production when writing this piece.

Replacing the then-contemporary carburetor technology with a fuel injection system meant less maintenance for the subsequent Interceptors, extending their life for well over 100,000 miles in some cases.

But don’t take our word for it; check out these 8 real-life examples of high-mile Honda Interceptors:

To sum up, a Honda Interceptor can last for over 80,000-100,000 miles, well over in some cases. That said, mileage is a less critical determining factor on overall lifespan than your service and upkeep frequency.

If you’re in the market for a used Interceptor, look at its service records and crash reports to know for sure how long the bike will last. Also, inquire into the seller’s storage and riding habits.

A Honda Interceptor with 25k-40k miles is considered high mileage, depending on the model type. That said, high mileage has more to do with setting a standard used market value for the bike; it’s not an accurate way of determining a bike’s longevity.

The fact is that the critical indicator about how much life a Honda Interceptor has left isn’t whether it’s considered high-mileage, as this is mainly a pricing tool to more market stability.

The principal determinants of an Interceptor’s longevity are:

It’s also never a bad idea to run the VIN and see if the Interceptor in question has any records of a collision or documented incident reports of engine failures.

How Many Years Does a Honda Interceptor Typically Last?

The Honda Interceptor can last for over 30 years, provided it’s stored away from corrosive elements and serviced per Honda’s spec. The average Interceptor is ridden between 3,000 and 5,000 miles a year; Interceptors on the road since the 80s have 100K miles on the clock–still running fine.

As long as you’re servicing it, the actual variable in how many years your Honda Interceptor will last is how long replacement parts are available.

Honda’s engine designs tend to cross-utilize parts, sometimes for generations. It’s easier to find details for the VFR800 and VLR250 Interceptors, as they’re still in production and are as popular as ever.

As an integral whole, Honda’s V4 motors are practically bulletproof; they tend to outlast their riders in some cases.

That said, all components wear out eventually. If you’re replacing and inspecting the individual engine parts and replacing them as they’re burning out, there’s no reason why your Interceptor won’t last as long as you want it to.

However, it might be a little harder to replace those old parts on the older Interceptor models.

So, in short, the Honda Interceptor has a reputation for lasting for multiple decades, provided worn components are replaced promptly. The availability of replacement parts is the primary variable on how many years a Honda Interceptor can last.

Is the Honda Interceptor Reliable?

The modern Honda Interceptors are celebrated as some of the most reliable bikes in the small naked and medium sport-touring class. The Interceptors have been in production since the early 80s; its reliable V4 engine has been improved on for decades by Honda’s legendary engineering team.

Since day 1, Honda had visions of reliability in mind when designing the V4 line of motors.

That said, and we say this all the time, the most critical factor in the reliability of a Honda Interceptor is owner upkeep habits and storage.

The modern Interceptor is a beacon of reliability. Owners hit the road on the sport touring 800cc model for hundreds of thousands of miles without ever needing an engine rebuild.

Does a Honda Interceptor Last Longer Than Other Motorcycles?

While most 80s commuters and 90s sport-tourers are expected to last for about 60,000 miles, the Interceptor has been known to run dependably for well over 100,000 miles or more than 20 years. There have been cases of well-kept Interceptors lasting for over 500,000 miles.

In 1998, the Interceptor was upgraded to fuel injection. While this is the standard on the modern moto-market, there aren’t many other bikes from that era that can hold a candle to the Interceptor when it comes to life span.

Interceptor owners regularly gloat online about how little time their bikes spend out of the shop.

What Typically Breaks First on a Honda Interceptor?

The first thing to break on a Honda Interceptor is its Automatic Cam Chain Tensioner or its Regulator/Rectifier. While the CCT regulates the engine’s timing chain, the R/R is the part that governs and holds the battery’s charging.

While the modern Regulator/Rectifiers are much more rugged than the part that came on the 80s and 90s models, the old Interceptors had R/Rs that would fry from the heat.

Some say it was due to the sealed engine. Others say it has to do with the R/Rs placement.

Regardless, if you’re on a pre-2012 Honda Interceptor, the R/R or the CCT are likely the first two parts to fail. Luckily, there are numerous aftermarket upgrades available for those of you with failing R/Rs.

Swap that puppy out, and you’ll enjoy years more of clocking miles; it’s one of the bike’s only weak points.

Here are a few recommendations that can extend the lifespan of your Honda Interceptor: