Honda released the CBR150Rc at the first crest of the mini-bike explosion in 2012.

As usual, Honda was ahead of the game with the CBR250R already readily available, but shedding 100cc off the motor was smart.

The CBR150R is a mini-bike best-case-scenario, looking like a Fireblade with a 150 motor and high-revving 11,500RPM, but how long does a Honda CBR150R last? 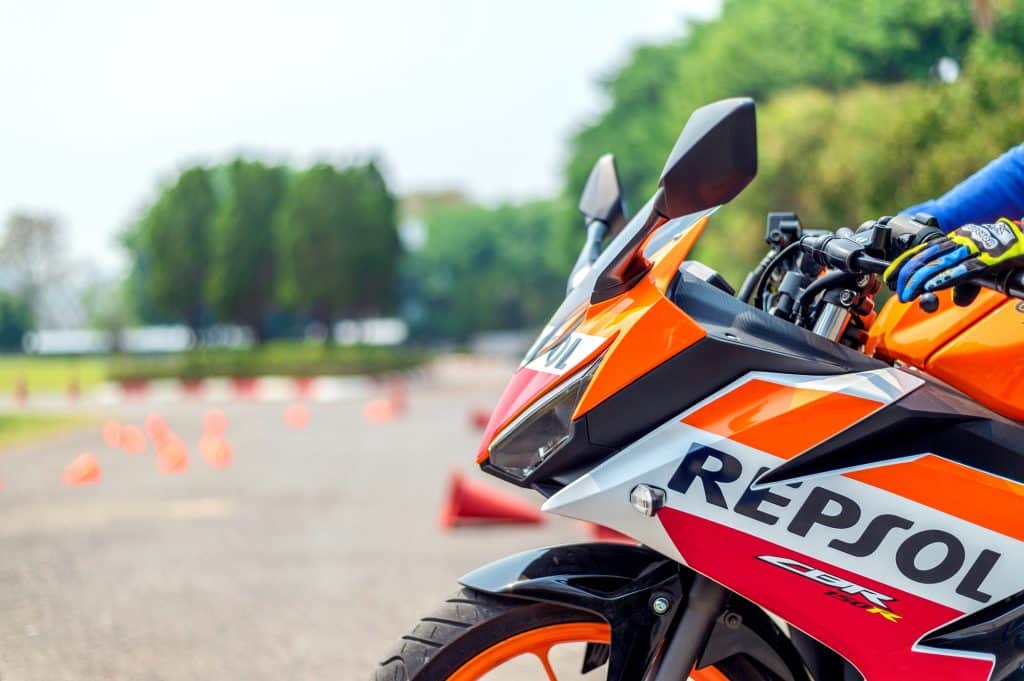 Here’s the short answer to how long a Honda CBR150R lasts:

A CBR150R will likely last a responsible owner well over 65,000 miles if it’s serviced regularly, stored away from corrosive weather and chemicals, and ridden per Honda’s specified use. The CBR 150R revs-high, making it a popular choice for mini bike stunts, which will reduce its longevity.

How Many Miles Do You Get on a Honda CBR150R?

The Honda CBR150R has only been around for just about a decade, but since its 250cc counterpart has been known to last for over 75K in some cases, it is safe to assume the 150cc sibling will give you at least 65,000 miles. That said, it should be used and serviced per Honda’s spec.

The CBR150R has a powerhouse of a motor, more than equipped for the job of powering a mini commuter. The lack of stress put on the new 150cc machine means it’ll likely last as long as its older sibling, which has a reputation for passing 75,000 miles with no engine rebuild.

While the CBR150 hasn’t been on the streets as long as the 250, nor does it get the long-distance usage its bigger sibling gets, here are a few owners who are off to a good start when it comes to clocking mini-bike miles:

The secret to the CBR150R’s longevity, as we specified up top, is its 149.4cc, DOHC, 4-valve, short-stroke, liquid-cooled motor.

There’s no doubt about it; Honda’s engineers outdid themselves when they designed this one.

Beginner bikes also change hands multiple times, as learners on mini CBRs are often anxious to upgrade to a bigger sportbike once they master the craft of riding.

An entry-level motorcycle like the CBR150R is often ridden sporadically and dropped accidentally during the learning process.

In short, we project a well-kept Honda CB150R that will last for at least 65k under responsible ownership.

For some, reckless riding is like a high-revving mini bike. If you’re in the market for a used one, we suggest asking for owner history, service records, and any repair, maintenance, or crash reports attached to the VIN.

An entry-level mini bike like the Honda CBR150R is generally considered high mileage between 20,000 and 35,000 miles, based on the geography, crash reports, market demographics, and how competently the previous owner serviced, stored, and rode the bike.

That said, the fact is that the number on a bike’s odometer is pretty irrelevant when it comes to analyzing how much longer it will last.

These figures pertain to the used market value of a motorcycle; they’re an attempt to regulate the market, not an accurate tool to discern a bike’s condition.

There are other, more critical factors to consider when assessing the condition of a used CBR150R, like the following:

These are some of the specific variables to be aware of precisely when inquiring into the lifespan of a Honda CBR150R.

The motor is more than powerful enough to perform its primary function for more than 65,000 miles if it’s respected, valued, and maintained with a TLC.

That said, usage is a critical factor due to the stunt-bike nature and reputation that’s bound to follow a high-revving stunt bike like the CBR150R.

How Many Years Does a Honda CBR150R Typically Last?

A Honda CBR150R could last for 16+ years if owned responsibly. The average bike commuter goes 4,000 miles a year–a bike that can last for 65,000 miles, if well maintained, has the potential to last for close to two decades.

If you take good care of your CBR150R, it’ll likely last longer than you have a use for it. It’s a high-powered 150, to be sure, but eventually, you’ll master it and might want to move on to something a little bigger for longer trips.

Is the Honda CBR150R Reliable?

The Honda CBR150R is reliable, thanks to its stacked 4-valve, liquid-cooled mini powerhouse of a motor. This little machine uses a Honda VTEC system, similar to a car, giving it more power than it needs to do the job of a mini-bike commuter without incurring wear.

Don’t take our word for it, though. Here are some reliability-based testimonies from real-life Honda CBR 150R owners:

Does a Honda CBR150R Last Longer Than Other Motorcycles?

The Honda CBR150R is the only bike in its class with a 4-valve engine that can rev up to 11,000 RPMs. With most of its power and torque in the high revving range, its top-end incurs minor war and has the potential to last longer than other mini-bikes.

The 2022 model got a hefty facelift, with a brand new engine that has more power with higher-spec components.

Its new design props up its efficacy, aerodynamics, and, therefore, its overall reliability.

What Typically Breaks First on a Honda CBR 150R?

The most commonly reported failure on a Honda CBR150R is shifting trouble–namely rough shifting, including skipped and sticking gears.

10 Great Tips to Make Sure Your Honda CBR150R Will Last Long:

Here are ten tips to keep your Honda CBR150R in excellent shape for years: