The Mustang is a midsize sports car produced by Ford Motor Company.

It is also Ford’s longest-running car model and the company’s fifth bestselling model.

The Mustang’s combination of superior performance and attractive pricing helped increase demand for the model. Consequently, first-year sales of the Mustangs were the highest in Ford’s history since the 1927 Model A.

If you want a solid sports car without breaking the bank, the Ford Mustang is a perfect choice. However, before you start your buying journey, read our statistics guide for the Mustang models. 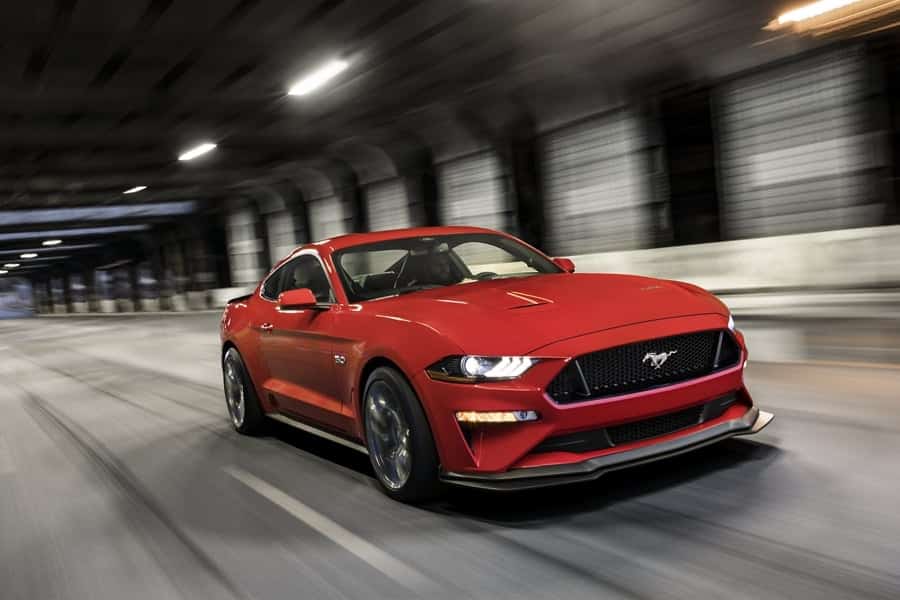 How Many Ford Mustang Have Been Sold Per Year in The US?

At the time the Ford released the Mustang, there was a growing demand for faster, more powerful cars.

Upon release, the Mustang proved the performance car Americans had always wanted. Moreover, the model’s affordable sticker price made it the favorite of the young Baby Boomers of that era.

Ford sold 126,538 Mustangs in the first year, even though executives had estimated annuals sales of 100,000 units. The popularity of the Mustang continued to rise, and Ford sold a whopping 559,451 models in 1965.

Contrary to expectations, demand for the Mustang did not fall, and sales reached record highs in 1967. Mustang sales totaled 607,568 units that year, bringing cumulative sales to over one million units.

Annual Mustang sales remained strong in the following years but never reached figures of the 1964-1967 era. Yearly sales, however, still totaled six-digit figures for long. It wasn’t until 1991 that Ford recorded five-figure annual sales of the Mustang model [80,247]. Since then, annual sales [starting from 2000] have averaged 110,852 units.

Below is a list that contains annual sales figures for the Mustang extending from 1980 through 2019:

What Year Did Ford Start the Mustang Models?

Ford released the Mustang to the public in April 1964 to much critical acclaim and public praise.

It offered superior performance yet was affordable for most of the buying public. Because of this, the Mustang quickly gained popularity among American buyers.

Ford used parts and components from other models in its lineup, such as the Falcon and the Fairlane, to produce the Mustang. This removed the need to procure separate parts and kept prices of Mustangs low.

The Mustang would continue to share design architecture with other Ford vehicles starting with the Pinto in the 1970s. Later, it moved to a ‘Fox Body’ platform shared with other Ford models. This lasted from the 80s to the early 2000s, ending in 2004 when the Mustang received a major redesign and its distinct architecture.

Over the course of its 55-year existence, the Mustang has undergone ten separate generations:

How Is the Fuel Economy on a Ford Mustang?

Fuel economy varies wildly across the models. However, we can say the Mustang models offer decent fuel economy, considering how much power they make.

These factors affect the fuel economy on Mustangs:

Here’s a table showing fuel economy numbers for the various 2020 models [Data based on EPA ratings]:

How Quickly Do Ford Mustangs Depreciate?

The Mustang is a unique vehicle in the world of sports cars.

Modern-day sports cars aren’t cheap, reliable, or easy to work on. But the Mustang is all these and more, which is why the demand for the model remains strong. Strong demand allows the used Mustangs to sell for good prices on the market.

From industry data, the Mustang appears to be one of the least-depreciating sports cars available. You can expect the average Mustang model to retain 55.6% of its value after the first five years.

This makes for a five-year depreciation rate of 44%, which is one of the lowest in the sports car segment.

Did Ford Recall any of the Ford Mustang Models?

The Ford Mustang has been recalled 64 times since it started production.

We’ve ranked each model year according to their involvement in recall actions:

How Much Do the Mustang Models Pollute?

Due to differences in fuel economy, the Mustangs in the 2020 lineup have different levels of emissions.

We discovered that the models using turbocharged four-cylinder engines have lower greenhouse gas emissions. This is likely because turbo-4s use Ford’s EcoBoost technology, which helps keep fuel consumption and overall emissions low.

By comparison, V8-engined Mustangs have dismal pollution ratings and emit, on average, 482 grams of C02 per mile.

Here’s a breakdown of the pollution of models in the 2020 Mustang lineup:

How Much Can the Mustang Models Tow?

Our research found no towing capacities for the Mustang, which suggests Ford does not rate it for towing. We won’t advise you to attempt towing anything with the Mustang, given its small size. You’ll only cause significant damage to your car’s engine and chassis.

How Reliable Is a Ford Mustang?

There is a consensus that the Mustang is one of the most reliable sports cars available.

Unlike those exotic supercars, a Mustang can handle almost anything you throw at it without breaking down. With proper maintenance, the average Mustang will stay in good condition for years. This means no sudden breakdowns or unexpected repair costs.

Our online research pulled several examples of Mustang models with well over 200,000 miles on the odometer. Even when they break down, Mustangs cost little to repair, thanks to the affordability of spare parts.

Such qualities explain why the Mustang emerged first in JD Power’s ranking of Most Dependable Sports Cars.

How Safe Is a Ford Mustang?

For some reason, safety technology isn’t widespread among sports cars.

However, most of these features don’t come standard.

The 2020 Mustang received a 5-star safety rating from the NHTSA, earning high scores on all crash tests.

Male car-buyers make up most of the Mustang’s buyer demographic.

In addition, dependability, build quality, and maintenance costs are the most important considerations for this buyer demographic.

In the early years, Mustangs were attractive targets for thieves, given their popularity.

However, improvements in anti-theft technology have seen thefts drop.

These are annual theft figures for the Mustang extending from 1983 to 2014 [based on data from NHTSA Theft Rate Database]: