You probably know that Tesla cars run on electricity but does that mean that the use of gas is completely eliminated among the Tesla fleet?

Did we ever have a Tesla that ran on gas?

Let’s dive a bit deeper into how that works.

Tesla cars are completely electric and not hybrid cars

Hybrid cars are cars that have both an electric motor AND a combustion engine.

This means that you can run on electricity (the motor) as long as you have power on the battery but as soon as you run out of power, you can switch to gas and run the car on petrol or diesel.

But not with a Tesla.

Teslas only have electric motors – typically 2 or 4 depending on the model and if you have AWD. But all the motors are electric and will not run on petrol, or any other type of fossil-fuel-based gas, for that matter.

If a Tesla runs out of power (battery) you don’t have any other option than to call a good friend or professional help to help you get new juice on the battery.

What happens if you put fuel in a Tesla?

You might wonder what happens if you try to put petrol or gas inside a Tesla. But you really can’t because there’s nowhere you can insert the gas pump nozzle.

We do have a flap you can open at the back of a Tesla but there’s no hole to insert gas. You only find a port for the charger.

Here’s what it looks like on an Audi E-Tron (which actually is one of the quietest electric cars): 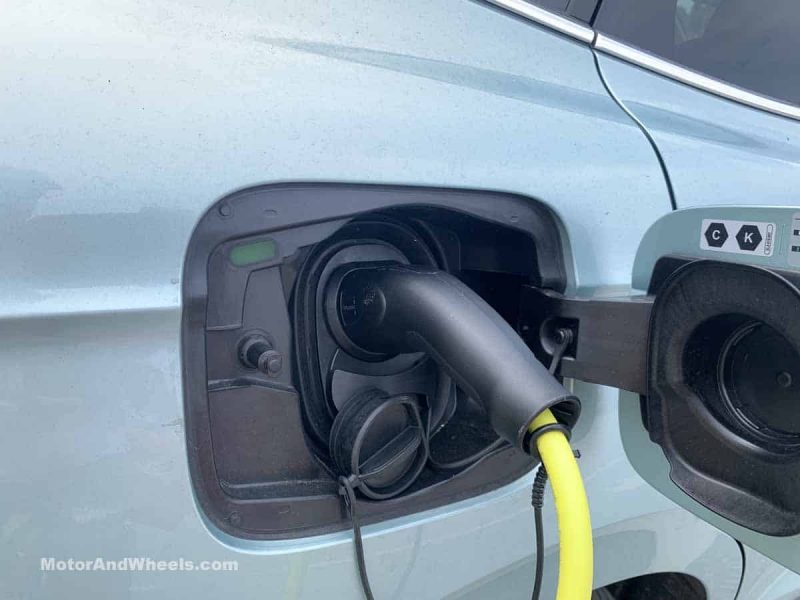 So, there’s literally no way you can fill gas in a Tesla. Even if you forgot that you’re driving an EV and not an ICE car, you still cannot accidentally fill any type of gas into your Tesla.

The just isn’t anywhere you can do it!

When did Tesla switch from gas to electricity?

Tesla cars have actually always been based on electric motors.

This also means that the world has never seen a Tesla car that could take gas (petrol or diesel).

Even the first Tesla prototypes were fully electric, making the Tesla company (and Elon Musk) true pioneers when it comes to electric cars.

The first Tesla model was the first generation Tesla Roadster that was put into production around 2008 and it also didn’t take any fuel. It too was entirely electric and actually, it was one of the first factory-produced cars to show the world that a non-fuel-based car could be a realistic option for everyday use!

Elen Musk (founder of Tesla) is still very much against fossil fuels and the use of petrol and diesel fuel. Here’s a tweet from his from 2022:

Hate to say it, but we need to increase oil & gas output immediately.

You’ll see how he’s advocating that should raise the prices on oil and gas in order to drive the green agenda and create even more grounds for buying more electric cars.

A few people have installed gas-driven engines in Teslas

Even though all Teslas are born with electric motors (only), this doesn’t stop some people with mad skills from installing engines with lots of horsepower and a thirst for gas inside their Teslas.

We have seen a few examples of this where people have installed a Porsche boxer engine inside the frunk (front-trunk) of a Tesla where there is plenty of space for such.

This means we have a few Tesla running around the streets on regular petrol fuel!

This is what it looks like when you install a V8 engine inside a Tesla:

This beast of a car sounds exactly like a mad Porsche when you let the horsepower loose as you can hear in the video above.

Not really what you expected when taking a walk in the park!

Is electricity or gas cheaper for driving a car?

A Tesla Model S will cost you approximately $15-20 to charge, depending on where you’re located. In most states, you will be able to charge your Tesla for less than $15, actually.

As you can see, this is much cheaper than filling up a regular car with gas. Gas prices are pretty high right now, but even when that’s not the case, you typically pay costs $2.5 a gallon; that means a car with a 12-gallon tank costs $30 to fill up.

A full tank of gas will get you 300 miles, for a regular family sedan whereas a Tesla Model S will go 350 miles, easily!

So, as you can see, it’s quite a lot cheaper to drive an electric Tesla than to get out your gas-guzzling old friend. This is also why the future is electric and just another good reason to look into electric cars the next time you need a new car.

We have put together a list of some of the best electric cars that give you the most mileage at a reasonable price. Here’s our top list of affordable electric cars with good range.

What happens when a tesla runs out of battery?

With a Tesla, you have the option of switching on “Towing Mode”.

This will allow you to have the car towed behind another vehicle in order to get you to a charging station:

You may not be so lucky if you’re not having a Tesla because many other electric cars cannot be towed as an electric car doesn’t have neutral gear.

Electric cars don’t have gears at all – and therefore also not the neutral gear!

This also means that many cheaper electric cars have to be put on a trailer or U-haul truck in order to be moved to a charging station!