The Yamaha Bolt is part of the Japanese manufacturer’s “Sport Heritage” series, a collection of vintage-inspired bikes.

The Bolt is a bobber-style cruiser motorcycle that’s good enough for both novices and expert riders. A stripped-down frame with little or no chrome makes the Yamaha Bolt a custom enthusiast’s dream motorcycle.

For all its high points, the Yamaha Bolt has a few flaws. We’d be discussing those weaknesses for the benefit of those who may want to buy this model.

Note: these problems don’t mean the Yamaha Bolt is a bad bike.

We only want to give you an idea of the issues to expect. 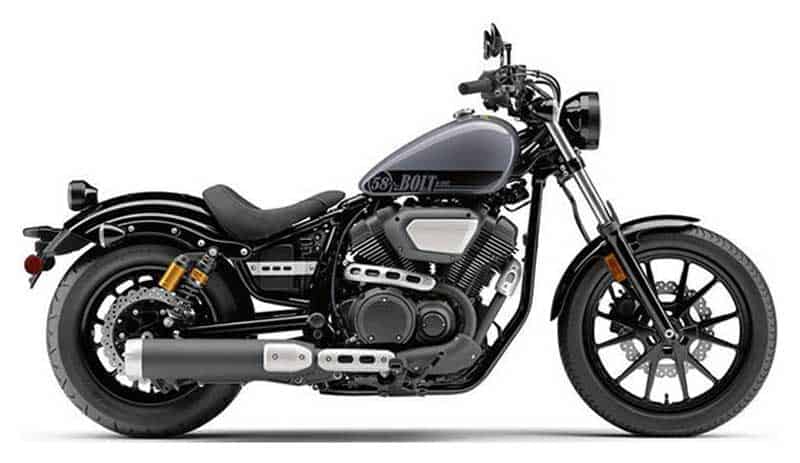 A number of Yamaha Bolt owners have reported experiencing the “death wobble” on their bikes while riding.

So what exactly is the “death wobble” and why is it problematic for riders?

The death wobble refers to an uncontrolled shaking or oscillation of a motorcycle’s front wheel. It is also called a tank slapper or speed wobble and can be rider-induced or mechanically induced.

When a bike suffers from a death wobble, the handlebars will shake violently from side to side to the point where the rider loses control.

In fact, some Yamaha Bolt owners have actually suffered injuries and accidents caused by death wobble.

This is one problem you must avoid at all costs.

According to reports, the death wobble can occur when:

As we said before, a death wobble often results from either a rider error or a mechanical fault.

On some bikes, the death wobble occurs at a particular speed.

Usually, this is often at high speed (e.g., 75mph and above). The reason this happens is that the bike cannot handle the speed.

Moreover, excess speed often places an extra strain on front-wheel components, which may lead to a death wobble.

Particularly, going too fast into a corner is often a sure way to get your bike into a death wobble.

Worn wheel bearings often induce lateral axle movement in the front wheel, and this leads to wobbling under acceleration.

The following tire issues can lead to a death wobble:

Sometimes, worn or damaged wheel forks can contribute to death wobbles on a bike.

This is perhaps the most likely cause of a speed wobble.

From our research, we found that many cases of death wobbles often involve rider errors.

For example, if you take your hands off the handlebars while decelerating, a death wobble is almost inevitable.

Possible Solutions for These Issues:

Some Yamaha Bolt owners say the death wobble issue disappeared after they replaced the stock tires with better tires.

If you suffered from a death wobble, checking the wheel bearings is one of the first things you should do.

If they are worn, replace them with newer variants.

Check if the tires have optimal air pressure.

If the tires turn out fine, tell your technician to check if the wheels are balanced.

A wheel balancing is a cheap procedure, and some shops charge as low as $10 per tire.

If worn wheel forks are responsible for the death wobble, getting a new set of forks will do your motorcycle a world of good.

Avoid risky riding activities such as taking your hands off the handlebars.

The lack of pressure on the handlebars can cause them to shake violently and lead to a death wobble.

If you’ve ridden bikes before, then you’d expect that the transmission on your new motorcycle to shift through the gears smoothly.

Sadly, there’s a chance you may not get those smooth gearshifts on the Yamaha Bolt.

Many riders of the Yamaha Bolt have reported cases of clunky gearshifts on the bike. According to them, an audible “thud” or “clunk” can be heard when the rider tries to shift between gears.

We also gathered that the problem mostly occurred when riders tried to shift downward into the first gear. Therefore, you may not experience this problem when you switch from, say, 5th gear to fourth gear.

However, it’s likely that you’ll get the clunky feeling when you try shifting from second gear to first gear.

Some owners actually love the clunk, but you may not. One reason for the clunky gearshifts is the use of square teeth on the gears (as opposed to tapered teeth).

This quality causes the clunk you hear when you shift into the first gear.

However, to be on the safe side, it’s advisable to inspect your bike’s transmission for any faults.

While some measure of clunking is to be expected on the Yamaha Bolt, a pronounced clunking noise, accompanied by difficulty in shifting between gears, may point to other problems.

Possible Causes for Clunking on the Yamaha Bolt:

A bad clutch will induce clunky gearshifts on your bike.

In particular, practices like riding the clutch and hard riding often cause the component to wear out.

With time, you may start to feel a clunk when you switch between gears.

The Yamaha Bolt uses a wet clutch type that requires constant lubrication. Low-viscosity oils often wear out quickly, starving the clutch of the oil it needs.

This may eventually lead to clunky gearshifts.

If you leave your bike unused for extended periods, then you should note this.

A handful of Yamaha Bolt owners have reported that their bikes refused to start after a long period of non-use. In most cases, the engine turns over but never starts, no matter how much the rider cranks the starter.

Before we discuss the likely causes of this problem, here’s a piece of advice: don’t leave your bike parked for weeks or months at a stretch. If you can, run it occasionally, even for a few minutes.

Bikes are machines and often develop problems if they are not used.

So, what can cause your bike not to start after a long period of disuse?

Here are some likely culprits:

General Pros and Cons of the Yamaha Bolt

Here are the main positives and negatives of the Yamaha Bolt:

Here are some selling points of the Yamaha Bolt:

Thanks to its bare bones, no-frills look, the Yamaha Bolt is a serious bobber motorcycle that can be customized to individual tastes.

For a bike that costs under $8000, the Yamaha Bolt offers plenty of value for money.

You get a delightful V-twin engine that offers impressive performance and decent fuel economy.

Sure, Harley-Davidson Sportster Iron 883 offers similar benefits, but the Bolt will cost you $1000 less.

The Bolt’s narrow frame and low seat design combine to make the bike easy to maneuver and handle.

Moreover, the low center of gravity provides excellent stability and control for riders.

Here are some downsides of the Yamaha Bolt:

“Simple and compact, with low seat height, the Yamaha Bolt R-Spec offers light, agile handling that instills rider confidence. A new breed of “crossover,” the Bolt R-Spec is an interesting blend of cruiser features in a chassis that offers a natural, upright riding position.”

“Powered by an air-cooled V-twin, but with plenty of technology, the Bolt is a good in-between size: not too small that you’ll outgrow it soon and not so big that it is intimidating for new riders. The bobber-style seat, easy cruisin’ rider triangle, and naked-bike look make the Bolt a choice little bar hopper or commuter ride.”

What Is the Resale Value On Yamaha Bolt?