And if so, how often do burning cars explode?

Do Cars Explode When They Catch Fire?
It’s very rare to see a car explode when it catches fire. For a car to blow up, it needs the perfect proportion of oxygen, gas, and fire. Cars run on liquid gas which will typically not explode when set on fire.

Let’s start by establishing that cars are engineered such that, in the event of a worst-case scenario, they burn, not explode.

A lot of people argue a 30% chance, but you’ll find out as you read on, that they probably experienced a large grease fire flare-up, or heard the tires burst, which aggravated the pressure of the fire, by blowing a ton of air to it. 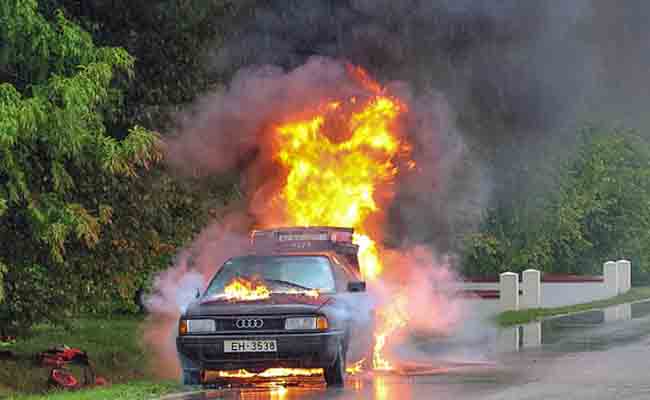 What makes a car explode?

In the absence of any propane tanks hidden somewhere in the trunk, here are the facts.

For an explosion to happen, a large amount of heated gas must be produced in a pressurized chamber, causing the gas to explode out of the chamber.

However, just because a car’s gas tank is a confined chamber doesn’t make an explosion possible.

Unlike the propane tank, vehicle gas tanks are not pressure vessels, which means that their sealing is not tight enough for extreme pressure to build, and to cause a burst.

Interestingly, vehicle gas tanks are designed to vent their pressure.

And they are mostly plastic nowadays.

The amount of liquid in the car’s gas tank makes it a lot harder for the plastic tank to heat up to a melting point. Usually, the fire would have been put out before this happens. But when it does happen, because the tank is plastic, it will melt, allowing for the liquid to escape and burn.

And even with non-plastic gas tanks, the metal they’re made of are not thick enough to create or withstand pressure. Under pressure, they deform and crack easily, as do welds in high heat. In any case, the liquid inside the tank boils but does not explode.

Now, let’s assume for a second that a 30% chance was the case.

There might be a slight possibility of a small explosion with the right fuel to oxygen ratio, but not the aggressive sort as shown in movies.

The liquid gasoline or diesel that powers a vehicle is not an explosive substance. When lit, liquid gasoline burns fiercely but does not explode. That explains why a car can burn so intensely that it resembles an explosion.

Of course, the case is different with electric cars, or is it? Let’s find out.

Are electric cars safe from exploisions? 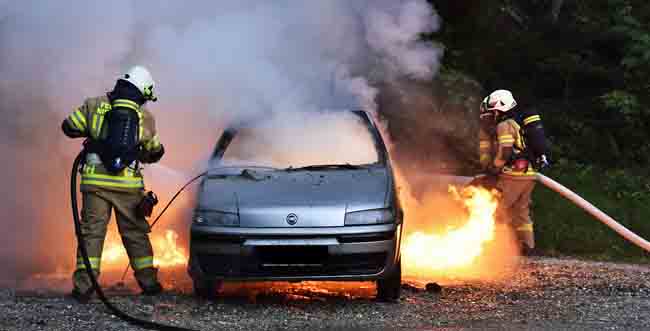 It largely depends, yet hard to assert given the recent explosion events from fires, especially with Tesla electric cars.

For electric cars that use the Nickel-Metal Hydride (NiMH) batteries, which are allegedly non-flammable and non-explosive, and sealed in a protective case, I would safely agree that it’s safer.

However, all-electric cars that use over 6,000 lithium-ion cells have a propensity to explode.

Lithium-ion batteries use a cobalt oxide chemistry, which is prone to fire and explosion in any case of improper management or damage.

There was a case where fire emergency responders reported that individual batteries from a Tesla car’s pack were exploding from a burning vehicle. But, that could have been as a result of the crash, since electrical components can be short-circuited from a crash, and then result in a fire and/or explosion.

In case you use a Tesla, don’t be quick to shiver. It’s been reported that Tesla vehicles have passed the recent U.N. battery test.

And of course, Tesla also posits that it has many built-in safety features that prevent an explosion.

Can cars explode from overheating?

Like we’ve already established, the heat created by a burning vehicle will not lead to a car explosion.

Evidently, in most cases, it takes a car crash to spark a fire in an electric car, but for gasoline/diesel engines, until the gasoline heats up to a 500`F point, it won’t ignite by itself, even with gasoline vapor in the tank.

More so, there’s not enough air for a fire to travel through the fuel line to the tank, and continue burning. So, to set the gasoline in the tank on fire, you literally have to fire a bullet in there, or perhaps bore a hole in the tank and throw in a lit match stick.

Bottom line: a source of fire must be present to achieve fiery chaos.

So, how do these car fires happen?

Except for arson, no sole cause exists, as multiple factors may contribute to car fires.

But, we can take a look at some significant few, as follows:

Explosion or not, car fires are financially inconvenient, not to mention dangerous and life-threatening.

Nobody enjoys a fire hazard (except in movies), so it helps to be cautious.

What are the signs your car may catch fire?

It’s important to keep a keen eye out for hazardous signs, such as:

How to prevent a car fire

Just like the saying goes “prevention is better than cure”, familiarizing with potential fire hazard factors may allow you to apply the appropriate caution that can prevent a dangerous situation.

Because, once the car is burning, the only thing you may be able to save is your life.

Here are a few things you can do:

When you experience unusual or rapid changes in your car’s gas or oil levels, that may mean there’s a leak somewhere.

The first way to check is to monitor the underneath of your car for leakage signs.

Sometimes, even when you’ve done the best you can, you may not actually be able to prevent a car fire, so…

What do you do when your car catches fire?

If you see signs of smoke or smell something burning, firstly, safely and slowly pull the car over, then shut off the engine. Secondly, exit yourself and all passengers from the car, then quickly move far away from the car; as far as 200 feet.

The next thing you should do is to call an emergency response team. In the meantime, you can use your fire extinguisher from a few feet away if the smoke is emitting from the hood.

However, if the smoke is coming from the rear of the car, immediately get far away from the car, and do not, under any circumstances, make any attempt with the extinguisher.

It’s always better to call and wait for emergency response teams instead, especially when in doubt.

That’s by the way.

So, from everything you’ve been reading so far, I hope it’s now clear that car fires don’t lead to large explosions, and the average gasoline/diesel car doesn’t usually explode as seen in Hollywood movies.