Toyota’s first full-size pickup, the Tundra’s entrance into a segment filled with long-term stalwarts such as the Ford F-150 was unprecedented.

Sporting a powerful V8 engine, the Tundra wowed customers and automotive critics with its impressive performance, off-road agility, and towing ability. Soon after its release, it was nominated as North American Truck of The Year for 2000. It also received a ‘Truck of The Year’ award from Motor Trend Magazine in 2000 and 2008.

Since then, the Tundra has remained one of the top models in the full-size truck segment. Buyers who want a pickup truck with solid off-road performance, impressive hauling capabilities, and safety will find the Tundra attractive.

Read on to get production numbers, depreciation rates, recall data, towing capacities, and many more: 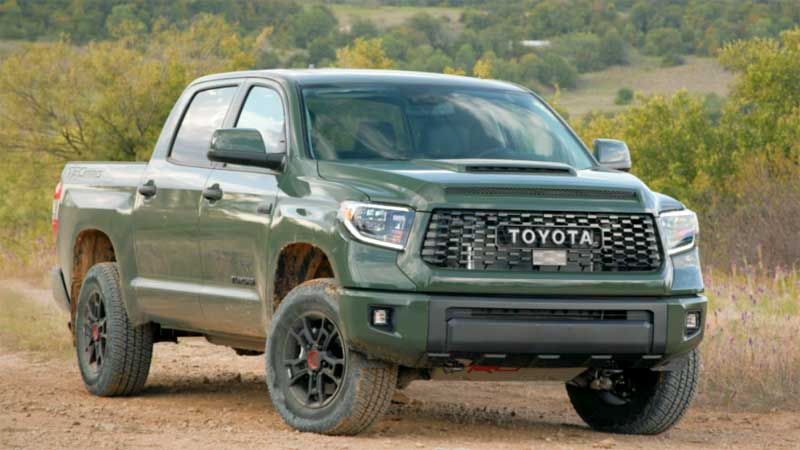 How Many Toyota Tundra Have Been Sold Per Year in The U.S.?

At the time the Tundra was released, critics deemed it too “small” to compete in the pickup truck segment.

However, all doubts were cleared after Toyota sold 100, 455 Tundra models in its first year. Tundra’s first-year sales were the highest in Toyota’s history and were double the sales of the older T100 model.

Annual sales of the Toyota Tundra have been stable since then, averaging over 118,879 models per year. Except for the years between 2009 and 2011, yearly sales of the Tundra have never dipped below 100,000 models. Toyota has sold 2,377,571 Tundras since over the course of the model’s 20-year existence.

Below is a breakdown of yearly sales of the Tundra since it started selling in the U.S.:

What Year Did Toyota Start the Tundra Models?

Toyota started production of the Tundra at its Princeton, Indiana plant in 1999, releasing it to buyers in 2000.

The Tundra marked Toyota’s entry into the full-size pickup segment, competing directly with the Ford F-150, Ram 1500, and others.

It shared many features with the older Tacoma and T100 models, including a 3.4 L V6 engine. However, the Tundra later dropped the V6 engine in favor of a bigger 4.7 L V8 engine, the first instance of a V8-powered Toyota truck.

Although Toyota has made several changes to the Tundra over the years, most of its core elements have remained the same. While other Toyota trucks such as the Tacoma have received major redesigns, the Tundra has not.

The first generation of the Tundra lasted from 2000 to 2006. The second generation started the following year (2007) and is still on.

How Is the Fuel Economy on a Toyota Tundra?

Although Toyota is known for making fuel-efficient vehicles, it apparently took a different approach with the Tundra.

Both the V6 engines used in the model’s early years and the succeeding V8s are incredibly fuel-thirsty. Hence, it is not surprising that the Tundra has the worst gas mileage in its class.

Below are EPA-rated gas mileage figures for the 2020 Tundra models:

How Quickly do Toyota Tundras Depreciate?

The Toyota Tundra may not sell as much as its rivals in the full-size truck segment, but it definitely has the best resale value of the lot.

Because of the Tundra’s attractive combination of performance and comfort, consumer demand for the model has remained high. As a result, used models tend to command high prices on the used-truck market.

According to iSeeCars, the average five-year depreciation rate of the Toyota Tundra is 35.9%, the lowest in its class. The Tundra also made iSeeCars’ list of top 10 vehicles with the lowest depreciation, placing fourth.

Some models it beat to the honor include the Chevy Silverado, Ram 1500, GMC Sierra, and Honda Ridgeline.

Did Toyota Recall Any of the Toyota Tundra Models?

While a reliable truck, the Tundra has had problems of its own over the years.

Some of these have been severe, warranting a total recall of the models affected. In its 20-year history, the Toyota Tundra has been recalled 51 times. Below is a breakdown of recall stats for each model year:

Note: A recall could involve more than one model year.

Hence, we sorted the M.Y.s based on the number of recall actions they have been involved in:

How Much Do the Tundra Models Pollute?

Due to its gas-guzzling V8 engine, the Tundra emits far more greenhouse gases than most vehicles.

Full-size trucks typically have high pollution statistics, but the Tundra takes it up a notch further. However, pickup buyers are hardly concerned about the environmental impact of their vehicles, focusing more on performance.

Below is a breakdown of the CO2 emissions of the 2020 Tundra models:

How Much Can the Tundra Models Tow?

Towing ability on the Tundra is largely impressive, thanks to a powerful 5.7 L eight-cylinder engine that produces a whopping 401 lbs-ft of torque.

We’d advise that you check the tow rating for your Tundra pickup before hauling anything, though. Tow ratings on the Tundra models often differ based on cab type and trim level.

How Reliable Is a Toyota Tundra?

Many have described the Tundra as a “workhorse” for its ability to withstand heavy abuse without breaking down.

These models have been known to last for thousands of miles whilst in excellent condition. In fact, the Tundra’s impressive reliability is one big reason new buyers are attracted to it.

Several automotive authorities have attested to the Tundra’s reliability, among them RepairPal and J.D. Power. RepairPal gives the Tundra a 3.5/5 reliability rating, ranking it as the sixth most reliable truck in the 17-model full-size truck segment.

Similarly, J.D. Power ranked the Tundra as the most dependable full-size truck in its 2019 Annual Vehicle Dependability Study.

How Safe Is a Toyota Tundra?

However, it offers below-average crash protection, evidenced in its poor performance on the IIHS crash tests. The safety body rates Tundra’s protection for drivers and passengers in the event of a frontal crash as “Poor” and “Marginal.”

It also disapproved of the truck’s headlights, giving them a “Marginal” score.

Most of the buyers of the Tundra pickup are men, with women owners forming a small minority.

As expected, those who buy the Toyota Tundra are not overly concerned with the fuel economy of their vehicles. In addition, they typically will not consider paying a premium for an environmental-friendly vehicle.

Price, practicality, and utility are far more important considerations for this buyer demographic.

For some reason yet unknown to us, the NHTSA Vehicle Theft Rate Database does not have much data for large pickups like the Tundra.

Whether this is deliberate remains unknown. However, from the small data we could gather from the database, the Tundra doesn’t seem a hot target for thieves, unlike other Toyota vehicles such as the Camry or Corolla.

The table below contains annual theft rates for the Tundra models.

If you see a dash (-) placed after a particular year, then it means data isn’t available for that year.