Started in 1994, the Toyota Avalon is Toyota’s biggest full-size car and its flagship sedan in the United States.

It offers a combination of safety, luxury, and performance, along with refinements that distinguish it from its rivals.

If you want a vehicle that is both comfortable and affordable, then the Avalon is perfect for you. 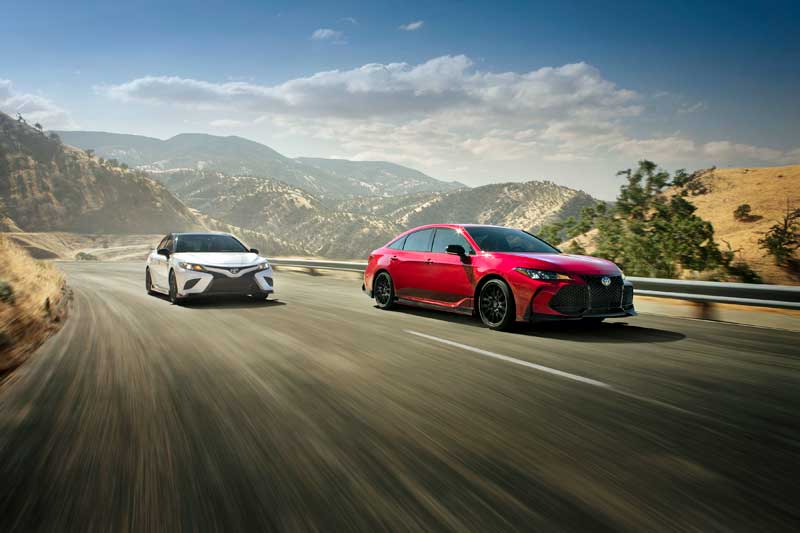 How Many Toyota Avalon Have Been Sold Per Year in The U.S.?

Since its release 25 years ago, the Avalon has become one of Toyota’s bestselling sedans in the U.S.

Demand for the model, especially in the early years after its release, was high.

In fact, Toyota went from selling under 70,000 Avalons in 1995 to sell a record of 104,078 models in 2000. This feat is particularly impressive, given that it occurred just five years after the model was first released.

Although the early Avalons sold well, the same cannot be said for the newer models. Thanks to America’s newfound love for SUVs and pickups, sales of full-size sedans such as the Avalon have reduced considerably.

Below is a table containing yearly sales figures for the Avalon since it started selling in 1995:

What Year Did Toyota Start the Avalon Models?

Toyota started production of the Avalon sedan at its Kentucky factory in 1994 and released it to customers in 1995.

Since then, it has undergone various changes to keep up with the competition.

To date, the Avalon has been in production for 25 years and has gone through four different generations:

How Is the Fuel Economy on a Toyota Avalon?

For a full-size sedan, the Avalon offers a better-than-average fuel economy across its models.

In fact, the Avalon’s gas mileage is one of the best in the full-size car segment.

The models in the Avalon lineup are gas-only cars and gas-electric hybrids. The fuel-powered models share a 3.5 L V6 engine while the hybrid variants use a 2.5 L V4 engine.

In terms of fuel economy, the hybrid-powered models outclass their fuel-powered counterparts. For example, a 2020 Avalon XLE model earns 22 MPG on city roads and 32 MPG on highways.

By comparison, an Avalon Hybrid XLE earns 43 MPG on city roads and 44 MPG on highways.

Here’s a table showing gas mileage for the 2020 Avalon lineup (Numbers based on EPA data):

How Quickly do Toyota Avalon Depreciate?

The Avalon is one of Toyota’s most popular models, and it’s easy to see why.

It offers users a comfortable ride and adds generous cargo space and decent fuel economy as bonuses. With its qualities, the Avalon’s status as one of the bestselling full-size cars on the market is not surprising.

The strong consumer demand for Avalons has led to reduced depreciation on existing models. In a luxury sedan segment that has one of the highest depreciation rates, Avalon models tend to hold their value.

Kelley Blue Book predicts the Avalon to hold 35.1% of its original value after the first five years of use. That makes for a depreciation rate of 64.9%, which, according to KBB, is the lowest in the full-size car class.

Did Toyota Recall any of the Toyota Avalon Models?

No car is without problems, and the Avalon has had its fair share over the years. Until 2019, the Toyota Avalon has seen 32 recall actions.

Below is a table detailing recall numbers for the Avalon models.

As recalls can involve multiple model years, we listed the number of recalls for each model year:

How Much Do the Avalon Models Pollute?

Although the Avalon’s fuel consumption is among the best in its class, it still uses more fuel than the average Toyota car.

Generally, full-size sedans are gas-guzzlers, and the Avalon is no different. And you probably know that the more fuel a vehicle uses, the higher its CO2 emissions.

As such, the Avalon models, especially, the gas-powered variants, emit copious amounts of greenhouse gases into the atmosphere. The hybrid variants differ, though. They consume less fuel and are the cleanest vehicles in the Avalon lineup.

If environmental impact is a concern for you, we’d recommend choosing a gas-electric hybrid, Avalon.

Here are pollution statistics for the 2020 model lineup:

How Much Can the Avalon Models Tow?

Toyota doesn’t rate the Avalon for towing; hence, there are no official towing capacities for the model.

However, with a powerful 3.5 L V6 engine, you should be able to pull 1,000 lbs. of load with an Avalon. We’d advise you to consult your mechanic before towing with an Avalon, though.

It’s even better if you avoided any form of hauling with this model.

How Reliable Is a Toyota Avalon?

Due to the status as its flagship sedan, Toyota knew it had to get everything right about the Avalon lineup.

This included making sure the model offered value for money and was reliable. Toyota has done well on both fronts, and the Avalon is considered one of the most reliable vehicles in its class.

The Avalon received 4 points out of 5 from RepairPal for its reliability. According to RepairPal, the Avalon is the third most-reliable model in the full-size car segment.

Other automotive authorities such as J.D. Power rate the Avalon highly in terms of reliability. In fact, J.D. Power ranked it as the most dependable full-size car in its 2020 Annual Vehicle Dependability Study.

How Safe Is a Toyota Avalon?

The Avalon sedan bears traces of Toyota’s commitment to making its vehicles as safe as possible.

Most of the 2020 models come standard with an eclectic collection of advanced safety features. Not only does Avalon’s safety system prevent crashes, but it also provides excellent protection in the event of an accident.

Further proof of the Avalon’s impressive safety is the high rating it has received from several safety organizations. For instance, the NHTSA gave it the coveted 5-star safety rating in both 2019 and 2020. Similarly, the IIHS awarded the Avalon its highest rating ‘Top Safety Pick Plus’ in 2019 and 2020.

Safety features in the suite include Lane Departure Alert, Antilock Brake System (ABS), Vehicle-Stability Control, Brake Assist, and many others.

Per J.D. Power, most people who buy the Avalon sedan are men, with women forming a small percentage of the buyer demographic.

Moreover, they are generally older, with many identifying as Baby Boomers or pre-Baby Boomers. The median age of the Avalon buyer demographic is 60 years.

In addition, buyers of the Avalon are affluent, earning an average yearly income of $119,246. This is not surprising, given the Avalon’s status as a luxury vehicle.

Compared to other Toyota sedans such as the Corolla or the Camry, thefts for the Avalon have been historically low.

We have compiled a list of annual theft rates for the Avalon extending from 1995 to 2014.

Numbers are based on data from the NHTSA Theft Rate Database:

Monthly and annual sales figures for the Toyota Avalon in the U.S.