Anytime you’re in the market for a new bike, or find yourself owning one that you can’t make heads or tails of, it’s a good idea to familiarize yourself with some of the common problems that the bike is subject to.

Today, we’re going to focus on Honda’s famous XR series, including some of these older bikes’ issues, how to fix them, and what people are saying about them.

To be fair, we’ve done a good amount of research on the XRs, mainly because we love them so much!

That being said, we’ve scraped every corner of the research pages and come up with these 6 most common problems with the Honda XR600 & 650L. 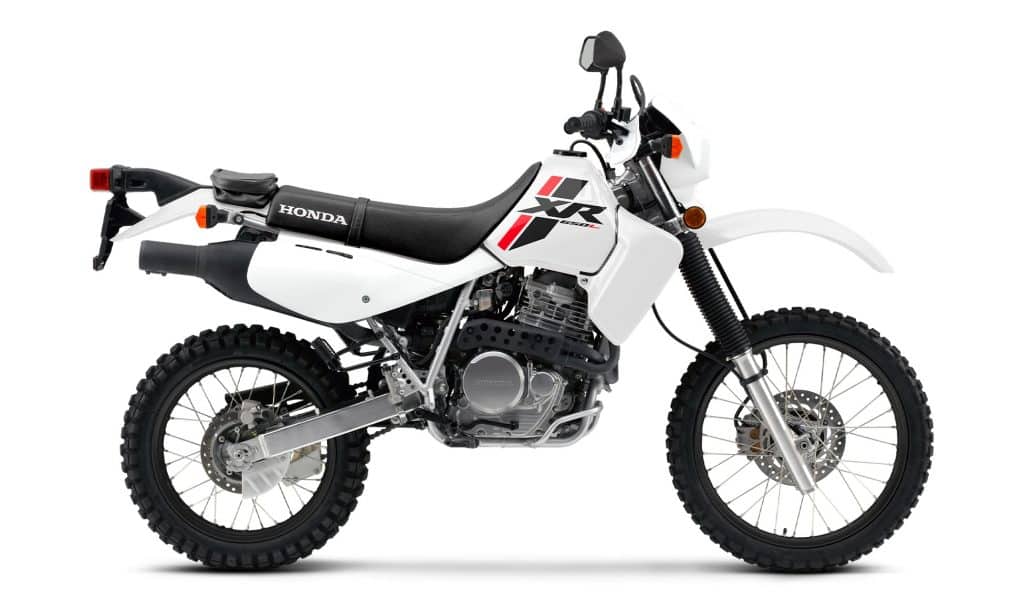 Kick-starting or crank-starting your bike uses an external lever that connects directly to the crankshaft of the motor.

When direct force is applied to this crank lever, by kicking it down with a good amount of pressure, it causes the engine to start.

The Honda XR 600 & 650L are older bikes and use a decompression lever as well to get the bike started.

We know from experience that the decompression aspect of older bikes like the XR600 & 650L can be finicky and not fun to deal with, especially on cold mornings.

And on top of it, an improperly decompressed kickstart system can buck you in the air and give your ankle a walloping!

When you need to get that XR 600 or 650L up and running, taking the time to crank this bike over 30-40 times is no fun (but it is a great way to warm yourself up on a cold morning)!

This is because a kick is only going to start the bike if the ignition timing and piston positioning are in the correct place when you crank down on it!

If the ignition timing and piston position aren’t synced up in a way that a kickstart happens every time, you’re going to be huffing and puffing by the time your bike finally turns over and purrs!

Start circuits on the ignition module are the dastardly culprit (specifically on the 650L model) and should be replaced if this problem is too much for you to bear! Take a look at the start circuit wiring and check for any burned or corroded wires to replace.

Older bikes that need to be crank started are going to occasionally give you some problems in this area, though. You get to decide for yourself if you’re going to go to the trouble to amend this problem!

Although the Honda XR 650L is still in production, the last XR 600 left the assembly line in 2000, having been replaced with the slightly modified 650L.

But for some of us, even the sleek, modern 650Ls aren’t going to ever compare with the hammerlike simplicity of the 600s produced from 1985 to 2000.

Unfortunately for us cro-mags, the newest, sleekest Honda XR 600 is at least 22 years old, meaning that parts are scarcely manufactured anew.

On top of it all, a limited pool of bikes means that over any span of time after which parts were no longer available, it’s probably that every other XR 600 out there in the world is a parts bike now…

3. Stalling Out Is no Fun

So now you’ve given your 30-40 cranks and your XR600 or 650L is finally up and running, climbing to the fully hot temperature that the bike operates under normally.

Unfortunately, your 600 or 650L is probably going to stall out on you every once in a while when you pull that clutch in!

This can be really frustrating, and the reason behind stalling with the Honda 600 & 650L is not that surprising. The valves need to be properly adjusted, and on these bikes, it’s very common for the valves to fall out of their specific clearances.

Valves need to be adjusted because the constant punch of the valve causes it to embed itself further and further into the head.

If you don’t adjust them, the tip of the valve can come into contact with the rocker or cam actuator and stall out that bike immediately, as well as cause long-term problems.

If your Honda XR600 or 650L is stalling out, be sure to adjust the valves to their specified clearances, which can be found in the owner’s manual.

A lot of XR600 & 650L owners found this to be a night-and-day difference in the performance of their bike when it comes to stalling.

Another common culprit for a stalling XR series bike is a malfunctioning or broken pulse generator, which can be replaced easily to keep your bike running smoothly without stalling out!

1st and 2nd-generation XR600s manufactured in the first few years tend to be the models that have the greatest chance of slipping 3rd gear. Although the problem was greatly lessened in subsequent generations that followed, it tends to be a weak spot for the XR series.

Gears tend to fail because of worn gear teeth. When a gear’s teeth have worn down to a certain point, it won’t engage with the clutch and will be skipped over.

Unfortunately for many XR600 owners, the 3rd gear plate is going to wear down and become ineffective much sooner than any other part of the gearbox. It will certainly need to be replaced because worn gears can ultimately create catastrophic damage to your motorcycle.

The Honda XR600 & 650L are all-carbureted, all the time. With a no-frills approach to the design and maintenance of these neo-lithic thumpers, the 2020 model has the same carburetor system that its 1986 godfathers had. Updated, for sure, but essentially the same.

Anyone who has owned or ridden an older bike, or one like the 650L that still prefers the simplicity, knows that carburetors have their problems. They get dirty, gunked up, and can be a pain in the neck to adjust properly.

The carburetor is an important element of your bike’s function that needs to be properly maintained, especially if you’re ripping it up off-road in the dirt and the mud!

Ostensibly, your XR’s air filter is keeping all that rough debris out of your air intake, but over time your carb’s nooks, crannies, and valves are going to build up with dirt debris and low-quality gas gunk.

There’s nothing wrong with an old carburetor system and they’re pretty easy to clean, although if they need a fine-tuning it’s better left to certified technicians or at least someone really familiar with your specific carburetor.

Older bikes, specifically ones that are run hard and put away wet like the XR600 & 650L, need more consistent oil changes. We’d recommend changing your oil every 400 to 500 miles, possibly more often if you’re crushing it through wild territories!

Consistent oil changes can really help preserve the longevity of your bike’s engine. With new and quality used parts for the XR600s becoming increasingly rare, this is super important to upkeep!

We’ve heard of guys who ride these hard enough to use up a quart of oil a day, so be sure to change that filter every single time you change the oil!

Overall, the Honda XR600 & 650L are beloved in the dual-sport community for several reasons, including:

“The 450 of its time, the XR600 was the ultimate off-road 4 stroke dirt bike for many years. Without plenty of power at just about any RPM, you can ride casually or aggressively and it will pull you smoothly.”

“There’s one in every Honda showroom. It won’t be in the front window or on prominent display, but it’s there, and it will be sold, replaced and sold again. The Honda XR650L is a staple in the dirt bike world. At one time it was considered the most dirt-worthy dual-sport bike you could buy. Now, it fulfills a different role as a cross-platform machine that serves adventurers, commuters and trail riders. Even if you think you know it, the XR650L is worth another look.”