Zero Motorcycles leads some of the most cutting-edge innovations taking place in the electric motorcycle scene.

Their premier electric bikes maintain modern sport bike stylings while packing an efficient drivetrain, offering EV two-wheelers some of the fastest recharge times in the game, but just how fast do Zero motorcycles go? 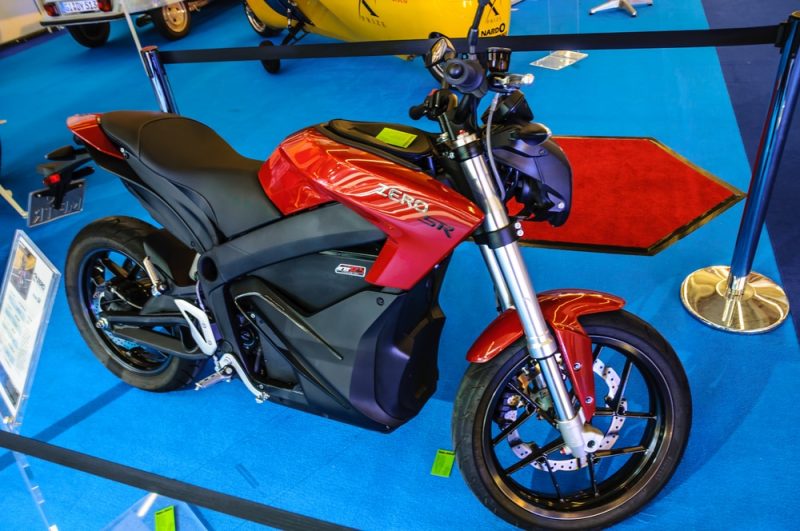 Here’s How Fast Zero Motorcycles Are:

The top speed of a Zero Electric Motorcycle varies between their various models. The Zero FX maxes out at 85 MPH, while the ZF series can go as fast as 102 MPH. The SR/S line hits 124 MPH. Zero motorcycles can go from 0-60 in less than 4 seconds, depending on the model.

According to the data collected at zeroto60times.com, Zero motorcycles can go from 0 to 60 MPH between 3.3 and 6 seconds depending on the year model, bar a few exceptional readings.

Part of the reason why Zero motorcycles accelerate so quickly is due to their EV nature. Electric bikes don’t need to shift.

This means the rider doesn’t have to engine brake the clutch, kill the throttle, change gears, and re-engage the clutch and throttle over and over again during the acceleration process, or as this real-life Zero rider put it on popsci.com:

Because you don’t need to shift, accelerating is an easy, linear experience—twist that throttle and zoom forward. That allows you to zip away from any cars that you think might be encroaching into your space, but it also means that you can scare yourself if you twist it too much. Also, it’s very quiet—it makes a whirring sound when you drive it, and when you’re sitting still with it turned on, it’s completely silent…

On the electric Zero motorcycles, a twist on the throttle is all it takes to generate acceleration—keep the throttle rolled back, and the bike will hit 60 MPH in a matter of seconds.

We dive into the specific data acquired for each model in the list below:

If you’re not sure about investing in an electric bike, read this article about reasons an electric motorcycle is a bad idea.

What Is the Top Speed on Zero Motorcycles?

The Zero SR/S reaches a top speed of 124 miles per hour, while the subsequent Zero models offer top speeds that range between 85 and 102 MPH, depending on the year model and package.

The Zero DS and DSR are similar to the SR/S line, except they come with knobbed tires and long-stroke suspension packages to be more off-road friendly.

They produce a maximum speed of 102 MPH.

The FX line of Zero motorcycles is dirt-focused electric motorcycles that are also street legal, technically making them dual sports.

The FXS, on the other hand, boasts a more street/sport-oriented styling, coming stock with street tires. Both models max out at 85MPH.

The zero SR/F is the electric motor brand’s attempt at a performance-oriented super street motorcycle, stocking a tubular frame and the largest, most powerful electric motor Zero makes.

The Zero SR/F comes with safety and stability software features like traction control and Anti-Lock Brake systems and boasts a top speed of 124 MPH.

What Is the Fastest Zero Motorcycle?

The fastest Zero motorcycle is the 2022 S/SR-SR/F family of electric naked, standard, or streetfighter-inspired motorcycles.

They have a max speed of 124 MPH, pumping out 140 foot-pounds of torque which is instantly accessible with a single throttle twist thanks to its clutchless direct drivetrain.

The 2022 Zero S and SR bikes produce the equivalent of 110 horsepower with peak power development at 5,600 RPMs.

Here are a few additional Zero SR/S Specs, as posted by electrek.co:

The electric motors of  Zero motorcycles are electronically limited to producing speeds of between 85 and 124 MPH, depending on the year model motorcycle.

Zero Motorcycles invests hundreds of thousands of design and engineering hours into their invidious bike models, optimizing their performance and maximizing efficiency.

The CEO of Zero was quoted explaining their design philosophy as such:

…Whether they are riding on the pavement or the dirt, the quiet and smooth ride offered by the DSR/X enables the best possible connection between the rider and their surroundings on any terrain.

The ideology espoused by the company’s head honcho implies that the bikes have their speed electronically limited for the safety and efficient performance of each bike design based on their intended functions and riding etiquette.

We also have an article about whether electric motorcycles are easier to ride, in case you want to buy one.

Zero sits right in the middle of the electric motorcycle ranks regarding horsepower, torque, and top speed.

While they produce more power than Harley’s Live-Wire electric bike line and other top contenders like Evoke, brands like Energica and Lightning and Damon have models capable of superbike speeds.

Zero SR/F vs. Harley-Davidson Live-Wire One

The Zero’s engine puts out 110 horsepower compared to the Live Wire’s 105. And while the Live-Wire One is capable of speeds of up to 110 MPH, the Zero SR/F puts out 124 MPH. Furthermore, the SR/F punches 140 foot-pounds of torque; the Live-Wire One stops around 80 ft-lb.

The Energica Ego+ is an electric bike for sports riders, through and through. While the Zero SR/F’s specs smoke the Live-Wire One’s, the Ego+ puts out 170 horsepower for a top speed of 150 MPH. Part of its secret is its superbike-Esq trellis frame and cast aluminum wheels.

That said, the comparison isn’t entirely fair because the Energica Ego+ was engineered to be an electric racetrack bike. And while the SR/F may be the fastest bike in the Zero stable, she’s a street fighter, not a racetrack bike.

If you’re thinking of buying an electric motorcycle, make sure you know whether electric bikes are street legal in your state.

How Far Will a Zero Motorcycle Go on a Charge?

The range of Zero moto depends on how powerful the model’s motor is and which power pack package the rider opted for when purchasing.

If you’re thinking of buying an electric motorcycle, here’s what to keep in mind: You’re obviously going to need to charge it. If you have a garage or other easy way to park and plug it in, that’s a simple problem to solve. If you live in a city—and the Zero FX felt great for cruising around one—then you’re going to need to think carefully. I live in an apartment building and parked the bike on the street, so had no way to recharge, meaning that I had to rely on what was already in the battery for the time I borrowed it. While the model I was using has an integrated battery, the same bike comes with a modular configuration. That means you can remove the battery to bring it inside and then charge it—but it weighs 42 pounds. That’s rough if you live in a walk-up.

Zero Motorcycles Wants To Take You On An Adventure! (cleantechnica.com)