Undoubtedly, the F-150 is a capable truck and the most popular model in the F-Series lineup.

However, those who want even more power turns to another nameplate in the F-Series: The Super Duty. Released in 1998, this model has redefined the word “heavy-duty” with its mind-boggling towing ability and exceptional engine power.

The Super Duty lineup comprises the F-250, F-350, and F-450. All Super Duty models offer generous hauling capacity and solid off-road performance that’s hard to beat. Even better, they are comfortable to drive, unlike other heavy-duty trucks.

If you’re interested in buying a Super Duty truck, you will need the information to make an informed choice. We’ve written this article to give you key facts and numbers about the Super Duty models. 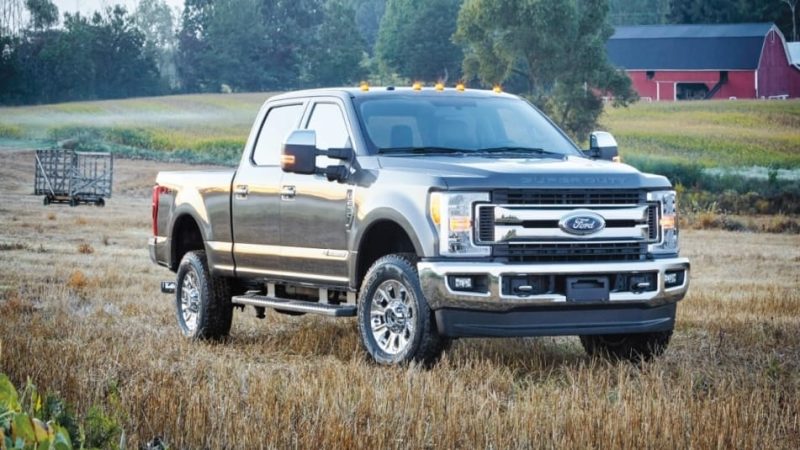 How Many Ford Super Duty Have Been Sold Per Year in The US?

Ford does not release individual sales figures for the models in the F-Series, which the Super Duty is a part of.

However, the F-Series has been the bestselling pickup vehicle in the US for decades.

Thus, we can safely conclude that annual sales of the Super Duty trucks are among the highest in the heavy-duty truck segment.

What Year Did Ford Start the Super Duty Models?

Production of the Super Duty started at Ford’s Kentucky Truck Plant in 1998.

Ford released it the next year, positioning it as a more powerful alternative to the F-150, which had acquired car-like characteristics to increase comfort. Significant differences between the F-150 and the Super Duty was the latter’s use of a heavier chassis and improved suspension.

These features increased payload and towing capacities on the Super Duty models.

As explained earlier, the Super Duty is visibly different from the F-150, and both models share only a few components. This included the tailgate, taillamp, 5.4-liter V8 engine, and 4R100 transmission.

The Super Duty was redesigned in 2011, receiving a larger exterior and a bigger front fascia.

Ford’s engineers also overhauled the Super Duty’s engines, boosting their power output. This was to ensure the Super Duty could compete with newer rivals such as the Chevrolet Silverado HD and Ram HD.

Fourth-generation Super Duty trucks debuted for the 2017 model year. At the time, this was the most extensive redesign the Super Duty had received since its introduction in 1998. It featured a frame made from high-strength steel and an aluminum alloy body.

They were using reduced aluminum weight which allowed the new truck to weigh in at 350 lbs less than previous models. Other changes include the absence of stepped front fenders and stand-alone front grille.

To date, the Super Duty has been in production for 21 years, undergoing four separate iterations:

How Is the Fuel Economy on a Ford Super Duty?

As the EPA does not give gas mileage for heavy-duty trucks, we cannot give definitive fuel economy figures for the Super Duty trucks.

However, reviewers from the automotive site Autoblog reported getting a combined 19 MPG from the 6.7-liter PowerStroke V8 diesel engine.

They also reported getting a combined 14.5 MPG from an F-250 powered by a 7.3-liter gasoline-powered engine.

The Ford Super Duty is arguably the most popular heavy-duty truck in America.

People love the model because it offers extreme towing ability and impressive off-road performance. Because of this, demand for Super Duty trucks has remained strong and has led to used models selling for high prices on the market.

Naturally, pickup trucks tend to hold their value well, even after years of rigorous use. However, the high demand for the Super Duty has protected it against harsh depreciation and kept its resale value high.

You can expect your Super Duty truck to retain 52.8% of its value after five years of use. This makes for a five-year depreciation rate of 47.2%, making the Super Duty one of the lowest-depreciating trucks.

Did Ford Recall Any of the Ford Super Duty Models?

These are recall figures for the individual models in the Super Duty lineup:

The Ford F-250 Super Duty has seen 98 recalls since it started production.

We’ve ranked each model year according to the number of recalls:

The Ford F-350 Super Duty has seen 68 recalls since it started production.

We’ve ranked each model year according to the number of recalls:

The Ford F-350 Super Duty has seen 42 recalls since it started production.

We’ve listed each model year and the number of recalls for it:

How Much Do the Super Duty Models Pollute?

Thus, we cannot give accurate pollution statistics for the models. But we won’t advise you to buy a Super Duty model if environmental pollution is a big concern for you.

How Much Can the Super Duty Models Tow?

The Super Duty’s claim to fame is mostly because of its exceptional towing ability.

Featuring a series of powerful V8s under the hood, these models can tow heavy loads with ease.

Per specifications, the Ford F-450 has the highest towing capacity within the Super Duty lineup, towing up to 35,750 pounds. This is closely followed by the Ford F-350 Super Duty, which tows an impressive 23,000 pounds.

How Reliable Is a Ford Super Duty?

Despite being touted as “Built Tough” by Ford, the Super Duty does not impress in reliability ratings.

RepairPal gives the F-250 model a 2/5 Reliability Rating, giving it a near-bottom ranking in terms of reliability.

The F-350 fares worse and has a 1.5/5 Reliability Rating and is the least-reliable full-size truck, according to RepairPal. We suspect the poor quality of early Super Duty models is the reason for the low-reliability ratings.

Nevertheless, newer models have become more reliable thanks to the advancement in production processes.

How Safe Is a Ford Super Duty?

Features such as automatic emergency braking, forward-collision warning, blind-spot warning, and rear cross-traffic alert, all come standard on the models.

They are also quite affluent, given the Super Duty’s expensive price tag. Moreover, Super Duty buyers are hardly concerned about fuel economy or environmental impact. Vehicle performance and durability are far more important factors to them.

The Super Duty hasn’t undergone testing by either the IIHS or the NHTSA.

We found no theft data available for the Ford Super Duty.

Nonetheless, the Super Duty comes with a handful of anti-theft technology sure to deter thieves.