With a typical gas-powered car, most of us wouldn’t hesitate to fill the tank all the way up when stopping for fuel.

However, electric batteries are not always so intuitive and don’t always benefit from being totally charged.

So how many percent should you charge your Tesla?

Read on to find out.

Here’s What Level Teslas Should Be Charged To:

You should charge a Teslas to around 80% or 90%, to help maintain battery life and make use of features like regenerative braking. For the Model S, that’s between 320 and 360 miles of driving range.

In terms of the long-range effects on the life of your battery, yes. You’ll want to avoid charging your battery to 100% as much as possible, and ideally keep it below 90%.

The ideal level for a lithium-ion battery is 50% charge – this is when the forces in the battery are most balanced and result in the least amount of wear.

So generally, the closer you can keep your battery to 50%, the better.

The areas you want to avoid are the top and bottom 10% brackets – so try not to let your vehicle dip below 10%, either.

There’s another reason to avoid charging your battery fully, as well, which has to do with Tesla’s regenerative braking feature. Regenerative braking uses the vehicle’s battery to recapture the force used in braking and redirect it to power the car.

With this feature, your Tesla will charge itself while driving.

The feature requires some extra battery space to be effective.

This means that charging your car to 100% won’t extend your driving range much more than charging to about 95% would, because regenerative braking can’t kick in until the battery dips below a certain percentage.

That’s why it’s generally a bad idea to always charge your Tesla to 100%.

The exception is if you have a lithium iron phosphate (LFP) battery, rather than a lithium-ion battery.

Does It Matter What The Battery Level Is When You Start Charging? 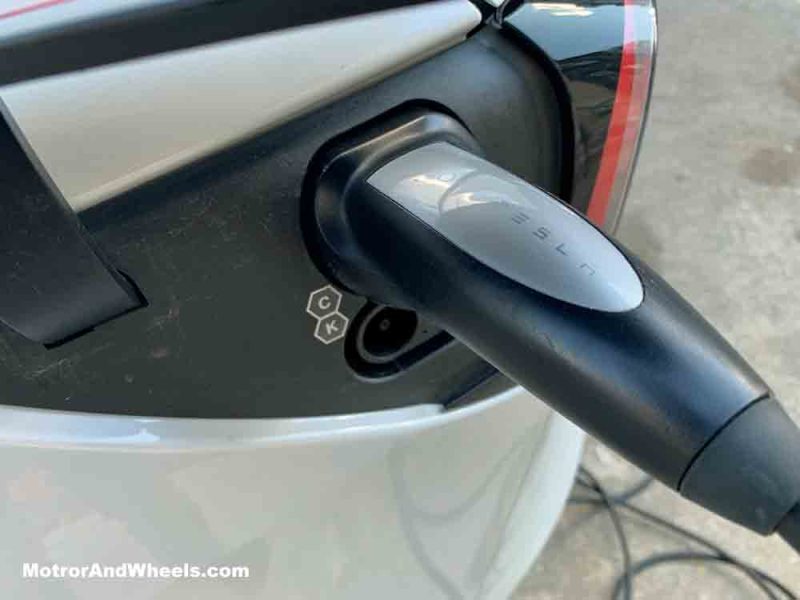 As long as you keep the battery within the recommended range, it shouldn’t really matter what level it is when you plug it in.

Tesla says that there is no advantage to allowing the battery to run low before recharging, as long as you stay above the lower threshold of 15% to 20%. The same rule for peak charging percentage should apply pretty much in reverse.

This means it’s usually best to charge your Tesla when you can, but only to the upper limit of 80% to 90%.

In the case of longer gaps between charging, you’ll benefit more from not overcharging your Tesla than you will by avoiding the case of it dropping to 20% or 30%.

You may want to know if you can charge a Tesla at any house.

What Happens If I Often Deplete The Battery Completely?

Of course, letting your battery run out completely isn’t ideal, either. Not only do you run the risk of being stranded on the side of the road without power, but it can also have an effect on the overall performance of your car.

Tesla’s official guide on the High-Voltage Battery states that:

“If you allow the Battery to discharge to 0%, other components may become damaged or require replacement (for example, the low voltage battery).”

This doesn’t happen often – usually, if you aren’t able to reach a charging station and run out of power, your car will recharge again like normal.

But it is a risk you run in letting it deplete.

What Happens If I Let The Battery Get Too Low?

It’s best not to drive your car often at low battery levels either.

Even if you don’t let it get down to zero, the use of your battery at low levels, along with the change in energy levels from a very low charge to a high charge, can both wear down your battery significantly.

Allowing your battery to discharge a full cycle, rather than allowing it to drop by 20% to 30% and then recharging, can significantly increase the wear on your battery.

How Often Should You Fully Charge Your Tesla?

You should really only charge your Tesla completely if you’re going on a longer trip and aren’t sure if you’ll have access to a charging station. Otherwise, charging your battery fully doesn’t really bring any benefits and can even reduce the capacity of the battery faster.

It’s also best to drive enough to lower your battery back down to around 90% or so immediately after charging to 100%.

The last thing you want to do for your battery is charge it completely and then leave it sitting full for a few hours, or overnight.

How Much Will Overcharging Affect Long-Term Battery Capacity?

While the rate at which a battery wears down is never an exact science, good charging habits can definitely contribute to extending the life of your battery.

This, in turn, will ensure that your range is maintained at optimal levels for as long as possible.

If you regularly charge your battery to a high level, and let it deplete to a very low level, it can reduce your battery capacity by 15% to 30% more when compared to the same time with ideal charging methods.

There is a good rule of thumb – when it comes to maintaining battery life, it’s better to avoid anything drastic.

How Is An LFP Different From A Lithium-Ion Battery?

Recently, many standard-range Tesla models have begun to use lithium iron phosphate batteries, or LFPs, rather than the more common lithium-ion ones.

Tesla’s charging recommendation for LFPs differs, and the company suggests that drivers fully charge their cars around once a week.

A full-charge can have a similar degrading effect on an LFP as it does on standard lithium ions – so why does Tesla recommend doing so?

The reason is twofold.

Secondly,
LFPs have a longer estimated lifespan than lithium-ion batteries to begin with.

So a weekly charge to 100% probably won’t create a noticeable difference between the two batteries, and your LFP may still end up lasting longer.

Is It A Good Idea To Charge Your Tesla Every Night?

The official Tesla recommendation is to plug your vehicle in each evening to top off the battery. However, that doesn’t mean that your battery will necessarily be receiving charge all night long.

This is because all Teslas are equipped with a feature which shuts off charging when it reaches a certain level.

Tesla’s automatic charging system is actually quite sophisticated, allowing the battery to avoid overcharging while using energy directly from the plug-in to maintain vehicle heat and complete system operations.

You can choose what percentage your battery charges to in the charge settings menu.

Teslas are set by default to stop charging once they reach 90%.

Maintaining the optimal charge for your Tesla may take a bit of planning and some getting used to.

Taking advantage of Tesla’s automated technology can be a big help, however, and once you get into a routine that works for you, the extension on your battery life will be worth it.