Hummers rank among the heaviest civilian SUV-styled vehicles ever produced. From the 7,000 pound plus H1 to the over 4,000 pound H3, Hummers tip the scales in terms of weight, making them slow and a bit unwieldy. In this article, we look at Hummers and how much they weigh.

How much do Hummers weigh?

Hummers can weigh over 8,000 pounds to a little below 5,000 pounds depending on the model and year. The Hummer H1 Alpha was the heaviest of them. H2s weighed over 6,000 pounds while the H3 had the smallest bulk of 4,600 pounds.

Regardless of the type you love, all Hummers are heavy, and this is one of the reasons for their powerful and gas-thirsty engines. 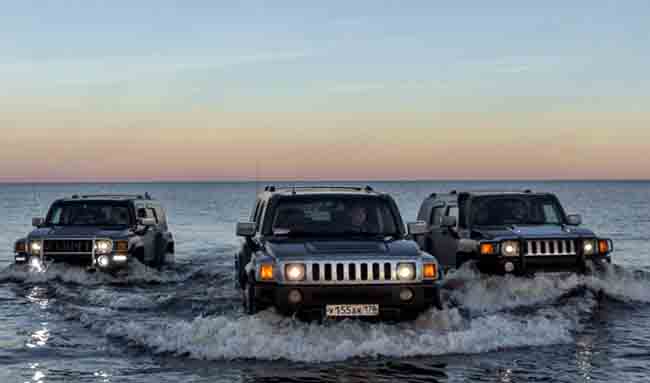 Below is a table of Hummer models and their weight.

How Heavy Can You Load a Hummer?

What’s The Heaviest Hummer Ever Built?

The 2006 H1 Alpha is the biggest Hummer ever built. It has a curb weight of 8,113 pounds and a Gross Vehicle Weight Rating (GVWR) of 10,300 pounds. This made it exceptionally powerful, allowing it to deliver a mind-blowing performance on the road and the trails.

The Alpha’s Duramax Diesel engine and its larger fuel tank increased range and made it the best of the H1s.

The heaviest H2s are the 2008 and 2009 models. A 2006 H2 Hummer has a gross weight of 8,600 pounds, allowing it exceptional stability in floodwaters and unbelievable rock-crawling abilities.

In fact, the H2 is so heavy it was exempted from the EPA’s emission reporting regulations because it was categorized as farm equipment.

The bigger the Hummer, the sturdier it is for off-roading activities. But the weight plays an essential part in the vehicle’s fuel consumption. This is why the H1 and H2 have poor fuel economy while the H3 could still manage decent miles per gallon.

Which Hummer Is the Lightest?

The H3 is the lightest Hummer. But not all H3s are equal. Early model H3s are the smallest in their class. The 2006 Hummer H3 has a curb weight of only 4,700 pounds and a gross weight of 5,850 pounds, making it the lightest of Hummers.

Don’t let the size fool you, though. The H3 is still a heavy vehicle and consumes more fuel than your average SUV. But it also offers better off-roading capabilities with excellent creature comforts.

Early model Hummers are lighter than trucks produced at later years. The vehicles become heavier as their technology matures, and the manufacturer perfects the drivetrain and other systems.

Engine swaps, revamped interiors, and modifications required to meet EPA emission standards all contribute to the incremental size and weight of Hummers.

How Much Does a Military Hummer Weigh?

There are several variants of the Humvee, the military truck from which the civilian Hummer was derived. However, the most common types have a curb weight of 5,200 to 5,900 pounds and a gross weight of 7,700 to 8,500 pounds.

Some up-armored variants weigh far more, but they were not the norm as ballistic protection made the Humvee vulnerable by slowing it down and making emergency exits almost impossible.

This means that the Humvee is lighter than the H1 and H2 and only weighs more than the diminutive H3. The reason for this is that the military had no need for a posh interior or sophisticated sound system in their troop transport.

AMG designed the Humvee with a barebones architecture to improve its survivability and reduce weight so that the vehicle can be airdropped for rapid deployment.

The truck does not use computer controls and is considered EMP-proof. What the military Hummer lacks in comfort it compensates for in ruggedness, although reports suggest that the Humvees are not the most reliable.

Why Are Hummers So heavy?

There are several reasons for the bulky physique of the Hummers. From their military pedigree to the Arnold Schwarzenegger-inspired macho persona, these trucks were never meant to be lightweight and gas-friendly. Let’s look at these factors.

The Hummer is a civilian version of the military Humvee, which became a superstar thanks to the first Gulf War.

The Humvee was heavy at around 5,900 pounds and was designed to transport GIs and their equipment as they follow armor columns into battle.

We expect the Hummer to retain some of this martial swag. But remember that the Humvee had next to zero creature comfort, unlike the civilian version, which promised the ultimate off-roading experience in luxury and style.

This meant the Hummer had to be heavier than its Army predecessor, with the H1 Alpha tipping the scales at over 10,000 pounds of gross weight.

The Hummer wasn’t just any vehicle. It was created for a niche market-the affluent buyer who wanted a street-legal tank-like vehicle for on-the-road and wilderness excitement.

It was beloved by celebrities and anybody with a well-oiled bank account. It helped that there was a considerable appetite for gas-guzzling vehicles of all sizes at the time thanks to record-low oil prices.

Everything about the Hummer is deliberate. For the vehicle to deliver the promised performance on the trail and the swamp, it needed to carry immense weight.

The H1 and H2’s bulk allowed it to ford waters even the Jeep Wrangler wouldn’t dare enter. Many people think this capability is because of the Hummer’s high ground clearance. But the increased weight helps the vehicle maintain a firm foothold in water.

The Hummer is a 4WD vehicle. Four-wheel drive adds up to 400 pounds to the truck and requires a powerful engine, further increasing the weight. And the lock differentials, heavy-duty tires, and central tire inflation system all add to the bulk.

You may wonder how poor mileage contributes to the Hummer’s insane weight. Well, it does. These vehicles could only manage around 10 miles per gallon in the H1 and H2 models. This was too short-legged for any meaningful adventurer if you are serious about off-roading.

To increase the Hummer’s range, the manufacturer had to increase the fuel capacity. The H1 Alpha has a 51- gallon fuel tank, which gave it an extended range but also made it the Hummer with the highest gross weight. 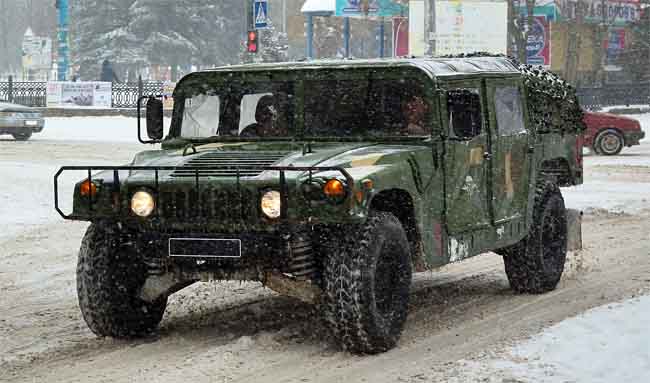 How Heavy Are Hummer Engines?

The Duramax Diesel used in the 2006 H1 Alpha weighs about 835 pounds, making it one of the heaviest used in SUV styled vehicles.

The 5.3-liter V8 engine used in the H3 weighs about 434 pounds. The 6.2-liter V8 used in the H2 weighed around 460 pounds but delivered enough torque to push the vehicle past 85 mph on the pavement.

AMG and GM produced the same type of Hummers for every region of the world. Despite the American appetite for jumbo-sized items, the Hummer is more than a mouthful for U.S. roads.

In Europe, where roads are narrower, and pedestrians still have more right of way, the Hummer is an oversized creature crowding out other road users. But this hasn’t stopped lovers of the vehicle from importing them in large numbers.

The Hummer will continue to draw flak from haters for its humongous size and fuel thirst. But these qualities endear the truck to Hummer lovers. If you are comfortable riding a seven-feet-wide vehicle and have enough mechanical experience to maintain it, nothing beats the durability and performance of a Hummer.

For all the bad reputation of this truck, when shit hits the fan and you need to evacuate a flood-ridden neighborhood, the heavy-footed Hummer might just save the day.