What Engines are used in Hummers?

Hummers use a wide range of engines from powerful V8s in the H1 to smaller 3.5 liters L5s in the H2 and H3s.

Let’s take a closer look at the engines used in the three Hummer models!

The engine type has a direct effect on the gas mileage of each model, with the H1 delivering an abysmal 10 mpg on the pavement while the H3 could manage an impressive 18 mpg on the highway.

The H1s featured five engine types based on their model years. All the motors are V8s and were released in manual and automatic transmission types. The 92/93 model year H1s used a GM Diesel 6.2 liter V8 engine which is massive. But despite the motor’s size and power, many drivers considered it underpowered for the gigantic Hummer.

In the 94 model year, AMG upgraded to a naturally aspirated GM 6.5 liter V8 diesel with a 4-speed transmission.

The 95/96 model years saw the introduction of the 5.7 liter Vortec 5700 gasoline V8 engine, i.e., the 350 Chevy engine which is the most ubiquitous gas motor in the world. However, the 4-speed gas engine Hummers were stopped in favor of the more powerful 6.5-liter turbo GM diesel V8.

Turbo diesel powered Hummers marked a departure from the earlier underpowered vehicles. The exceptional performance of the superior engine blew away many people who loved the truck. It delivered more torque, managed altitudes better and was even more fuel-efficient.

The reign of the turbo stopped along with the production of the H1. In 2006, the newly designed Hummer H1 Alpha rolled out with the magnificent 6.6-liter turbo Duramax Diesel V8 engine. AMG paired this extraordinary motor with an Allison 1000 5-speed transmission.

The 2006 Alpha had everything you wanted in a Hummer. A mean exterior, comfy interior, serious off-roading shoes, and a breathtaking 305 bhp. Not only did the Duramax engine provide more torque at lower rpm, but it also met the rigorous EPA emission standards.

The H1’s extreme engines gave it exceptional abilities on and off the road. Together with AMG’s advanced designs, these motors allowed the truck to climb a 22-inch incline, ford three feet deep waters and guzzle fuel like drinking water.

Did you notice that despite the smaller size, H2 engines delivered more horsepower than even the capable Duramax Diesel used in the 2006 Hummer H1 Alpha? The H2 wasn’t underpowered in the engine department and delivers unbelievable performance even in the most challenging terrain thanks to its powerful engines.

Because it was the smallest Hummer, the H3 had the least powerful motor. The H3 uses three power plants including a 3.5 liter, 3.7 liters, and a 5.3-liter gas engine. The first H3s had a 3.5-liter L52 engine which delivered 220 hp. It was paired with a 5-speed Aisin AR5 manual transmission although some models came with Hydra-Matic 4L60-E 4-speed automatic transmission.

From the above, apart from the 95/96 H1s, all other model years of the truck had diesel engines. The H2s and H3s used only gas engines, but they didn’t suffer any of the problems the first H1s experienced.

Which Hummer Has the Best Engine?

All Hummers have powerful engines, but they are not equal. Some models of the truck held lower-powered motors while others came with more capable drivetrains. Here are some of the best engines in Hummers.

The 2006 H1 Alpha has the best engine in its lineup. This engine is by far the most capable and delivers more torque, horsepower, and performance in all situations.

If engine power is a big consideration for you, the Alpha’s Duramax Diesel is the perfect choice for any Hummer H1 lover.

If you are buying the H2, the 2008 and 2009 model years have the best engines. This motor produces about 70 more horsepower than previous engines and is matched with a 6-speed transmission.

The 2008/2009 H3s have the best engines. Their motor produces 300 hp and allowed the vehicle to perform excellently on the road and the trail.

Hummer engines require more maintenance compared to similar sized trucks. They are built to last for a very long time and will serve you perfectly if you care for them. However, user habits can affect the frequency of maintenance.

People who use their Hummers for extensive off-roading may need to perform more servicing and repairs compared to those who drive on pavement. However, you will also spend more on maintenance if you drive your Hummer at top speeds on the highway.

The Hummer is best used off the pavement and its sturdy drivetrain and undercarriage barely feel any pressure when you are on the trail. Besides, you can’t drive at high speeds in the wilderness, so there is less strain on the vehicle.

But if you max out the vehicle while on the pavement, the engine works harder and the transfer case oil burns quickly. If you want to enjoy your road queen Hummer, drive it gently on the road. 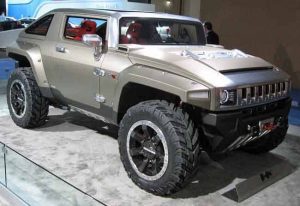 How Do Hummer Engines Compare to Regular Vehicles?

Hummer engines are used in many other regular trucks. Apart from Hummer’s higher performance in extreme conditions, their engines deliver almost similar capabilities to that of regular vehicles although they seem to consume more fuel. The reason for the Hummer’s lower mileage is its higher curb weight which requires the engine to work harder to propel the vehicle.

The H2 and H3 use the same engine with other GM vehicles still in production. But compared to regular trucks, they provide excellent capabilities on the trail.

How Do Hummer Diesel Engines Compare to Gas Engines?

The H1s are predominantly diesel-powered except for the 95/96 model years which used the 350 Chevy gas motor. However, most people love their Hummers that use diesel. The performance of the turbo-diesel Hummers beats that of the gas variant in every ramification.

The turbo diesel excelled on the road, inside the mud, and on high gradients. It is an astounding vehicle that could tow heavy loads and ford water depths which a gas engine wouldn’t dare to go because of its ignition system.

If you need a Hummer for adventure, you are better off with a turbo-diesel version or the phenomenal Duramax Diesel powered 2006 H1 Alpha.

Can a Gas Hummer Be Converted to Diesel?

Yes, you can convert all Hummers from gas to diesel. But it is expensive and you may end with a different vehicle. Many companies do this gas to diesel makeover but the most popular is Mash Motors Inc.

Mash Motors converts the H1, H2, and H3 to diesel. The company can install the venerable Duramax Diesel in any Hummer for improved performance and speed. It completes the work without tampering with your factory settings.

After the upgrade, you will have the same vehicle with the same interior and exterior but more power under the hood. However, the price starts from over $21,000 and some conversions cost over $31,000!

The strength of Hummer engines is proportional to their weight. This is why the H1 which weighs over 8,000 pounds uses powerful V8 diesel motors while the H3s have a 3.7-liter engine producing only 242 horsepower.

Considering the brawny reputation of AMG’s superstar civilian Humvees, it is logical for many people to marvel about the motor under the hood of these beasts. In this article, we look at the locomotives in the H1, H2, and the smallest H3.

The Hummer is a capable vehicle with a powerful engine. So long as your model year doesn’t have factory issues, they are reliable and always deliver regardless of the terrain or driving condition. Diesel Hummers are great if you are buying the H1. For the H2 and H3, you can’t go wrong with their gas engines. Regardless of the motor in your Hummer, you will enjoy them with regular maintenance and careful use.