One of the sleekest upgrades to many vehicles manufactured in the 2020s is the addition of fully digital LCD dashboards a.k.a digital gauge clusters.

These dashboards feature digital speedometers, odometers, and gauges for other important information about your car on lucid LCD screens.

It’s pretty much like a digital readout of statistically accurate data and it makes the driving experience better, safer, and more efficient.

Below is a list of some relatively affordable cars across different segments  with fully digital dashboards:

While you are here, be sure to check out our list of small SUVs with luxurious features. 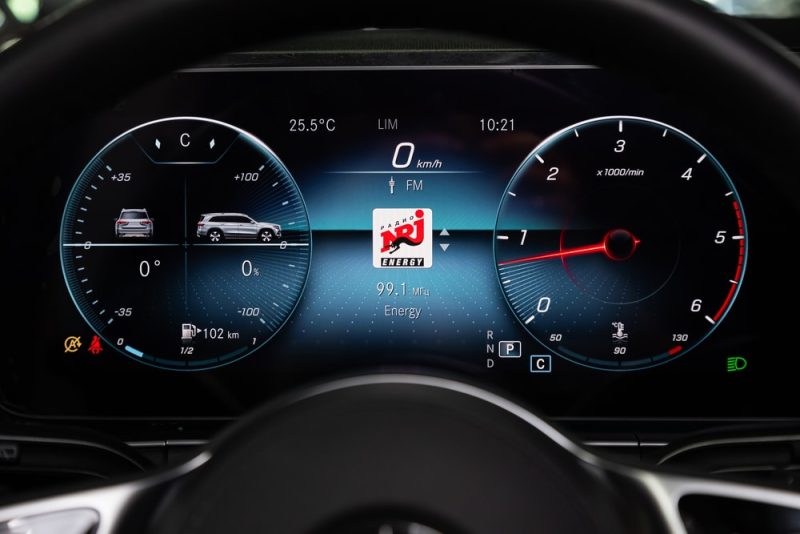 The Hyundai Sonata is a mid-size car that has been in production since 1985. It is now in its eighth generation and has sold millions of units in the U.S and all over the world.

Some of its best features include a gentle ride, roomy interior, great gas mileage and simple infotainment system.

Its infotainment system also consists of  a 12.3-inch digital dashboard as an available feature on the SEL plus trims or higher.

The Sonata starts at $26,365 although the SEL plus with the digital instrument cluster, costs about $33,240. This makes it one of the most affordable cars with digital dashboards.

The Honda Civic is a line of compact cars that debuted in 1972. It is one of the best-selling vehicles of all time with close to 30 million units sold globally.

Now in its 11th generation, it’s still getting a lot of love for its excellent fuel economy, composed ride and a plethora of standard features.

The digital dashboard is in a readout format featuring a tachometer, speedometer, odometer, fuel gauge and a driver information interface.

The Honda Civic is priced at about $26,145 for the base trim. However, the fully digital dashboard is only available on the “Civic Touring” and “Sport Touring” trims, which are a bit more expensive.

Even with the added expense, the Honda Civic remains one of the most affordable cars with fully digital dashboards. Check out our article about the Honda Civic’s suitability for road trips.

The Mazda 3 is a compact car manufactured by Mazda since 2003. Now in its fourth generation, the Mazda 3 has sold over 7 million units globally making it one of Mazda’s best-selling cars.

Some of its highs include a top-shelf interior, simple infotainment system and a zippy acceleration.

The Mazda 3’s infotainment system features an 8.8-inch display, standard eight-speaker stereos and a digital dashboard, among others.

The digital dashboard has a tachometer, speedometer, fuel gauge, engine coolant temperature gauge and many others.

Price range for the model is between $23,615 and $35,065 across all of its trims, making it one of the most budget-friendly cars with a digital dashboard.

Some of its best features include a smooth ride, great gas mileage and simple infotainment system.

An analog gauge cluster is standard but there is a 7-inch/12-inch digital dashboard available in higher trims.

Some of its most acclaimed attributes are excellent off-roading performance, spry handling, and a top-shelf cabin.

The Grand Cherokee dashboard also allows you to customize the main screen as you wish which means you get to choose what info stays on the main screen.

With a starting price of $42,830, the Jeep Grand Cherokee is one of the more affordable SUVs with standard digital dashboards.

The Ford Expedition is a full-size SUV marketed by Ford since 1997.  It has spent over 2 decades in the market and has remained one of the very best vehicles in the segment.

Some of the Expedition’s most praise-worthy attributes include a gorgeous cabin, massive towing capacity, and powerful twin-turbocharged engines.

It also has an impressive infotainment system including a standard 12-inch touchscreen, multiple USB ports, and a standard 8-inch digital dashboard.

The Honda Pilot is a mid-size crossover SUV that has been in production since 2002. It is Honda’s largest SUV and boasts sales of over a million units in the U.S.

Some of the Honda Pilot’s best features include its roomy cabin/cargo, vibrant acceleration, and a plethora of standard features.

Its infotainment system includes a 7.0-inch touch screen, Apple CarPlay/Android Auto as well as a standard 7.0-inch digital dashboard/gauge cluster. A 10.2-inch digital cluster is available on the “Elite” trims.

The digital dashboard features myriads of items including a speedometer, tachometer (for engine speed), odometer, and fuel gauge amongst others.

With a starting price of about $40,495, the Honda Pilot is still an affordable non-luxury car with digital instrument clusters.

The Honda Passport is a line of mid-size crossover SUVs that debuted in 1993 and made a comeback in 2019 after a long hiatus.

Now in its third generation, the Honda Passport enjoys praise from critics thanks to its spacious cargo/cabin, potent V6 engine, and myriads of features for base trims.

Speaking of features, the Honda Passport sports an excellent infotainment system with a touch screen, multiple USB ports, and a digital dashboard.

The Hyundai Palisade is a mid-size crossover SUV that entered production in 2018. It has since grown to become one of the most heavily rated vehicles in its class.

It currently ranks #2 on U.S. News’ list thanks to praise-worthy attributes like a powerful engine, composed ride, and lots of passenger/cargo space.

A full LCD 12.3-inch digital dashboard/instrument cluster is an available feature, as well. It features a speedometer at the center as well as a fuel gauge, odometer, tachometer, and engine coolant temperature gauge among others.

The Hyundai Palisade starts at $36,885, making it one of the most affordable cars with a full LCD digital dashboard.

Ever wondered if Hyundai SUVs hold their value? We have a comprehensive article on that.

The Hyundai Kona debuted in 2017 as a subcompact crossover SUV. It has since become one of the most successful models in its class with several hundreds of thousands sold globally.

It also occupies the #1 spot on the U.S. News list of the top subcompact SUVs.

Some of its best features include scrappy turbocharged engine options, a slew of standard safety features, and a simple infotainment system.

Its infotainment system consists of a standard wireless Android Auto/CarPlay, three USB ports, and an available 10.25-inch digital dashboard among others.

The Hyundai Kona starts at $23,475 for its base trim. However, you will have to pay a bit more than that (about $29,185) for the N-line trim with the LCD digital dashboard.

Even at that, it remains one of the most affordable cars with a digital dashboard.

The Hyundai Santa Fe is a mid-size crossover SUV and it is currently in its fourth generation. It entered production in 2002 and has become one of the most successful cars in its class.

It’s also rated very highly by critics for its top-tier attributes like its low base price, spacious cabin, and a slew of tech features.

A 12.3-inch digital dashboard is available in premium packages for higher trims. The dashboard features a speedometer, odometer, fuel gauge, and warning lights among others.

While the Santa Fe starts at $29,785, it will cost you about $6,000 more to get a package with the digital dashboard. And guess what? That still puts it very high on the list of the most affordable cars with digital dashboards.

The Kia Sorento is one of Kia’s mid-size SUV offerings that debuted in 2002. Now in its fourth generation, the Kia Sorento enjoys stellar ratings from critics and has sold over a million units since debuting.

Its highs include a luxe interior, excellent fuel economy, a balanced ride, and myriads of standard tech features.

Its infotainment system includes a standard eight-inch touchscreen, a standard analog gauge cluster, and a host of other exciting features. The Kia Sorento also sports a fully digital dashboard although this is only available for select trims.

The base trim of the Kia Sorento will only cost you about $31,415 and you only get an analog dashboard with that.

For a fully digital dashboard, you’d have to spend about $8,000 more to get the SX trim.

The Volkswagen ID.4 is a battery-electric compact crossover SUV that debuted in 2020.

One year after its debut, it was named the 2021 World Car Of The Year. Some of its highs include great driving dynamics, a spacious interior, and a slew of safety features.

While its infotainment system isn’t rated very highly by critics, it does feature a standard digital dashboard/instrument cluster.

The digital dashboard is mounted above the steering column and measures only six inches making it one of the smallest displays on the list.

The display shows a speedometer, range meter, trip computer, and a list of the active driver-assist features.

The Volkswagen ID.4 starts at $42,525 making it one of the most affordable vehicles with a digital dashboard. Let’s not forget that it’s a vibrant battery electric vehicle with outstanding gas mileage.

The Volkswagen Tiguan debuted in 2007 as a compact crossover SUV.

It’s Volkswagen’s best-selling model and Europe’s best-selling SUV. The Tiguan gets a lot of praise from critics for its premium cabin, soft/composed ride, and huge cargo hold.

Its infotainment system comprises a standard 6.5-inch touchscreen, six–speaker stereo, and a Mirror link among others. It also features a standard  8-inch digital dashboard stylized as Volkswagen’s Digital Cockpit.

The digital dashboard features a speedometer, tachometer, odometer, driving range, fuel economy, and many others. The model starts at $28,245, making it one of the cheapest cars with a digital instrument cluster.

The Volkswagen Atlas is a mid-size crossover SUV marketed by the Volkswagen Group since 2017. Since debuting, it has sold hundreds of thousands of units in the U.S. alone and gets mostly above-average ratings from critics.

The Atlas also includes an 8-inch digital dashboard which comes standard for base trims. The dashboard has a tachometer, speedometer, odometer, warning lights, fuel gauge, etc.

Base trims of the Volkswagen Atlas costs about $36,445, making the model a pocket-friendly non-luxury car with standard digital dashboards.